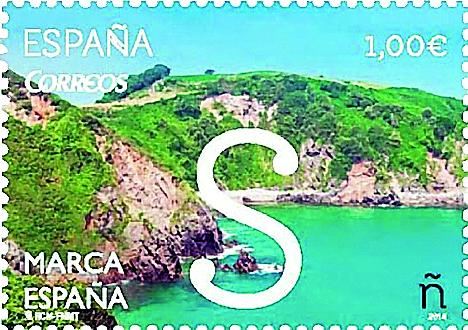 Figure 3. The S from Espana also represents the sun on this Brand Spain stamp issued April 30. The photograph shows Pechon Beach in the Cantabria province. 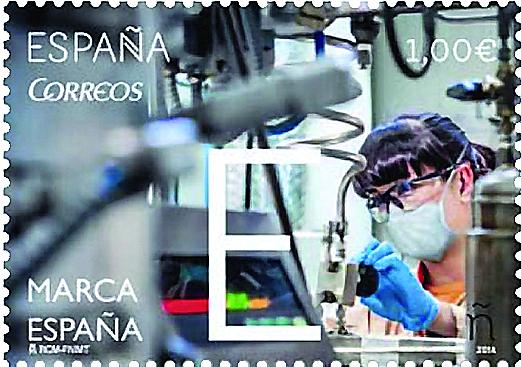 Figure 2. Six stamps in the Brand Spain series spell out the country’s name in Spanish, “Espana,” with one letter on each stamp. The E stamp, which honors enterprise, was issued April 14. 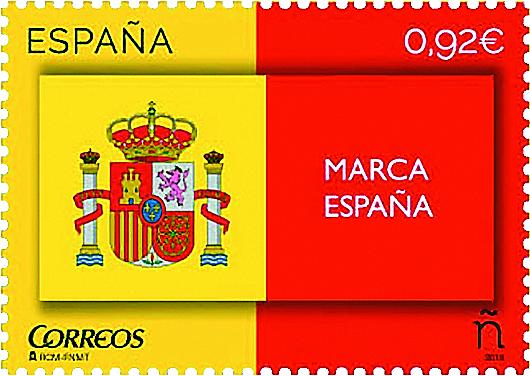 Six new stamps from Spain spell out the country name in Spanish, “Espana,” with one letter on each stamp.

These stamps, plus one other, comprise a series called Marca Espana in Spanish, which translates to Brand Spain in English.

Figure 1 shows the other stamp. The design features Spain’s coat of arms and the words “Marca Espana.”

This €0.92 stamp was issued March 25 to begin the series. The stamp is in panes of 20 with additional text in the selvage on the left.

The website at http://marcaespana.es explains that Brand Spain is a state policy with the objective of improving Spain’s image, both at home and abroad.

“In a globalized world, a good country image is an asset that helps to support the international position of a political, economic, cultural, social, scientific and technological state,” according to the website.

The next stamp in the series features an E representing both the first letter of “Espana,” and Spanish enterprise or business. A photograph of a woman working in a factory is shown in the background.

This €1 international-rate stamp was issued April 14 in panes of 12 with 12 se-tenant labels. Figure 2 shows the stamp.

The labels all feature the same design, showing the lower part of the photograph and including the red and yellow colors of Spain’s flag.

The remaining five stamps in the series also are denominated €1 and printed in the same format.

Figure 3 shows the next stamp, issued April 30. The S stands for sun, symbolizing Spain’s tourism industry. A sunny scene of Pechon Beach on the west coast of Cantabria is pictured in the photograph.

P is for patrimony on the stamp issued May 5. UNESCO has designated 43 World Heritage sites in Spain, including the Alhambra castle and fortress.

The stamp depicts Alhambra’s Lion Courtyard, named for 12 lion sculptures that surround the fountain in the center of the courtyard.

The stamp for the first A in “Espana” was issued May 22. This stamp represents art and pictures a detail from Las Meninas, also called The Family of Felipe IV, by Diego Velazquez.

Shown in the center of the painting is Princess Margaret Theresa, daughter of King Philip, or Felipe, IV and Mariana of Austria, surrounded by servants and a dog in Alcazzar Palace in Madrid. Her parents can be seen reflected in a mirror behind the young princess. The queen’s chamberlain, Don Jose Nieto Velazquez, stands in the doorway.

The masterpiece is in the Prado Museum in Madrid, which says, “This, the most famous of Velazquez’s works, offers a complex composition built with admirable skill in the use of perspective, the depiction of light, and the representation of atmosphere.”

On the stamp issued June 5, the Spanish language is represented by Ñ, a letter that is present only in the Spanish and a few other related alphabets. The letter is believed to have originated in the 12th century when scribes added a tilde above the “n” to indicate that the letter should be doubled.

The design shows famous Spanish novels: Don Quixote by Cervantes, published in two volumes in 1605 and 1615, and The Time of the Hero by Mario Vargas Llosa, published more than 350 years later in 1962.

The letter ñ also appears at the bottom right of each stamp in the series as an embossed watermark.

On the final Brand Spain stamp, to be issued June 13, the A stands for advances made in research and development by Spanish companies in medicine, nanotechnology, telecommunications and other fields. The design features an electron microscope.

The Spanish national printer printed all of the stamps by offset.