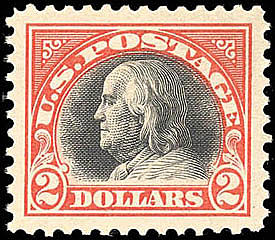 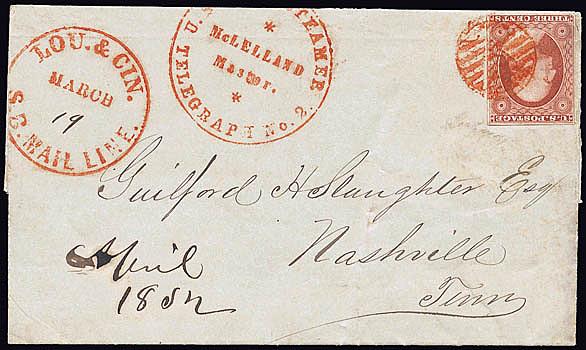 An 1852 folded letter sent by mail steamer from Cincinnati to Nashville with a rare packet and route agent combination usage realized $32,200 during the April 24-27 Schuyler Rumsey auction at the Westpex stamp show in San Francisco.

Among the headliners was the Hugh Feldman collection of United States postal history relating to mail transportation along coastal and inland waterways.

Feldman won numerous gold medals worldwide for this collection, and his book on the subject, based on exhaustive research at the National Archives, won a large gold medal for philatelic literature in 2012.

The standout item in the sale was an attractive 1852 cover that traveled down the Ohio River from Cincinnati to Louisville, and then onward to its destination in Nashville.

At the time, mail could be posted directly on the steamboats that plied the river carrying mail under government contract. An agent would postmark letters with the name of the line; in this case, “Lou. & Cin. S.B. Mail Line”

Sometimes, such as when the route agent was also a member of the ship’s crew, a private purser marking would be applied; in this instance, “U.S. Mail Steamer/Telegraph No. 2/McLelland Master.”

Telegraph No. 2 was the name of the ship.

The cover, one of only three from this line showing such a combination, is franked with a 3¢ Washington stamp of 1851 (Scott 11A) tied by a red grid cancel.

It bested its presale estimate by nearly a factor of 10, realizing a remarkable $32,200, including the 15 percent buyer’s commission Rumsey adds to all realizations.

Other sessions of the Rumsey sale at Westpex included U.S. and worldwide stamps and postal history. One of the more extraordinary items was a 1776 folded letter from Rhode Island to London.

Endorsed “this letter is permitted to be forwarded in the Brig. Triton” and signed by Nicholas Cooke, the first governor of the state, it describes the activities of a Rev. Graves “since Independency has been proclaimed here.”

The Triton was a British ship that had been captured by the Americans and then allowed to travel home to Britain, carrying prisoners and some mail.

The letter is one of only two pieces of censored mail known from the Revolutionary War, and the only one to have traveled across the Atlantic, getting a “Liverpool Ship Lre” postmark on arrival. It sold for $31,050.

A multicolored advertising cover from 1908 depicting a boy shooting a rifle was produced by the J. Stevens Arms & Tool Co. of Chicopee Falls, Mass. Franked with a 1903 2¢ Washington Shield stamp (Scott 319) tied by a crisp wavy line flag cancel, the cover was described as “one of the rarest and most spectacular designs known.” It went for $4,887.50.

Among U.S. stamps in the Rumsey sale, a mint, never-hinged $2 orange-red and black Franklin of 1918 (Scott 523), said to be the only example graded 100-jumbo and called “without question the finest mint example … in existence,” sold for an impressive $19,550.

At the more affordable end of the spectrum was an eye-catching 1931 postcard from a special Graf Zeppelin flight to the North Pole.

Franked with a German 4-mark stamp issued specially for the flight (Scott C42) canceled at Friedrichshafen on July 24, the card received a commemorative cancel three days later when the airship rendezvoused with the Russian ice-breaker Malygin near the Arctic islands of Franz Josef Land.

The postcard traveled back on the zeppelin’s return to Germany and was forwarded to its addressee in New Jersey. It sold for $218.50.