Two reports slam the USPS over sales of historic buildings 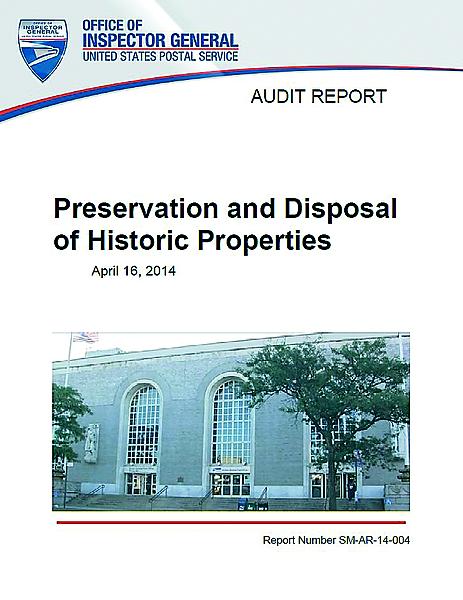 The cover of the April 16 report by the United States Postal Service’s office of the Inspector General titled “Preservation and Disposal of Historic Properties” shows the Brooklyn general post office.

The reports by the Postal Service’s inspector general and the Advisory Council on Historic Preservation have supported complaints by members of Congress who have charged that the USPS is ignoring federal guidelines and should end its sales of historic buildings.

Rep. Jose E. Serrano, D-N.Y., said the reports show “a fatally flawed sales process by an organization that does not understand the importance of these buildings to the communities they are located in.”

Serrano has been furious over USPS plans to sell a historic Bronx post office. He called on the Postal Service to suspend all sales until the USPS complies with the laws governing historic properties and its own regulations.

The inspector general’s report, issued April 16, said the agency “did not know how many historic properties it owned or what it cost to preserve them, as required by the National Historic Preservation Act.”

The report said it auditors found the USPS has sold 22 historic properties between October 2010 and July 2013 “because of financial challenges.”

The USPS had another 25 up for sale and was considering selling 28 others, the report said.

Titled “Preservation and Disposal of Historic Properties,” the report said the Postal Service has the authority to sell historic buildings “but must follow certain regulations for preserving their historic features.”

The report noted, “Additionally, the Postal Service must follow certain regulations for relocating retail services from all properties regardless of whether the property is historic.”

The report also disclosed that when the Postal Service sold 10 historic post offices, it failed to report the status of New Deal art found in them to the National Museum of American Art, as required by Postal Service policies.

The Postal Service also failed to collaborate with the Advisory Council on Historic Preservation and failed to submit its 2011 status report to the council.

“The council could help the Postal Service develop a program to establish covenants to protect historic features and help secure covenant holders to monitor compliance with those covenants,” the inspector general said.

The report recommended that the USPS develop an accurate listing of its historic properties, notify the National Museum of American Art about the changing status of any New Deal art and insure that the historic features of any postal buildings are preserved.

It said Postal Service officials agreed with most of the recommendations, but added that management further stated “they were not aware of any failure to identify a property as historic prior to its disposal or any failure to follow the regulatory process prior to disposing of a historic property.”

Architect Milford Wayne Donaldson, chairman of the Advisory Council, noted that “the preservation community and the public have significant concerns about the potential closure of these historic facilities, including the loss of public use of the buildings, the risk posed to the integrity of historic buildings and the artwork they contain and the potential loss of public access.”

The council called on the USPS to suspend further sales until the agency comes into compliance with all historic preservation laws and regulations.