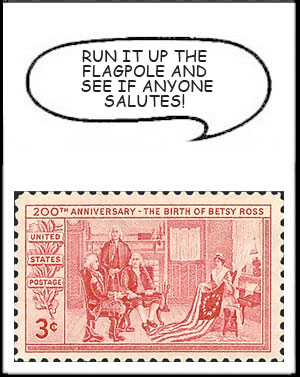 From the first group, William Kriebel of Philadelphia, Pa., suggested that George Washington might be saying, "Stars?! I wanted polka dots!"

Impossible though it might be, several entries brought the subject into the present day with the all-too-often seen offshore manufacturing of goods sold here. The first one of these received was from Lewis Ludwig of Port Angeles, Wash., who has Ross apologizing, "Sorry George, I forgot to remove the Made in China tag."

Another major theme was the application of computers to the process. Ken Bonvallet of Westerville, Ohio, has a modern Betsy Ross saying, "General, I know you can get this flag cheaper online, but I provide free shipping!"

The nonphilatelic line winner is also a reflection of the modern day. I don't know its origin for certain, but it does seem to fit the situation depicted on the stamp. It is from Bob Bialo of Cary, Ill.

The philatelic lines submitted all tended to be long and involved, as is this winner from Duncan Teague of Arlington, Tenn.: "George, if I put the word 'forever' in the blue space, I won't have to keep adding new stars every time the number of states goes up."

"General, enough war stories. I'm not turning over the flag until I get paid!" by Edgar Dunlap of Gainesville, Ga.

"Buy one! Get one free!" from John Nickle of Rusk, Texas.

"Heavens to Betsy! It's perfect!" sent by David Vikan of Dickinson, N.D.

"If you think I'm going to sew your britches after all this work, you're crazy!" by Mark Choma of Collinsville, Ill.

"We have a visitor from Warsaw, Pole-land, who will demonstrate some innovative ways to display the flag," from M. Denis of Bridgeview, Ill.

"It's beautiful, Betsy, but I told you it had to fit on a postage stamp," sent by Milt Keiles of Monroe Township, N.J.

The next cartoon caption contest will be announced in the July 14 Linn's.