A bumper crop of updates for Christmas seal earliest uses 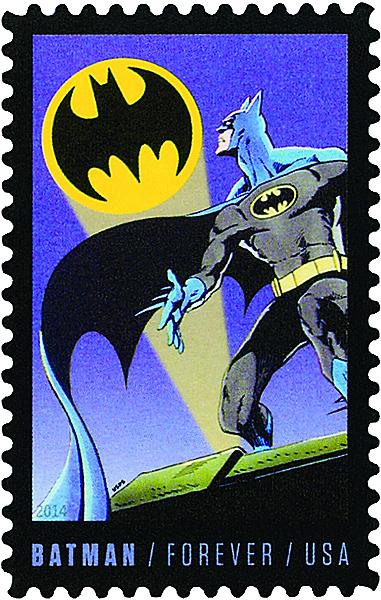 The cartoon caption contest stamp for December is this new stamp from the 2014 Batman pane of 20, with eight separate designs. The rules to enter the contest are in the accompanying article. Entries must be received by e-mail or at Linn’s by Dec. 22. 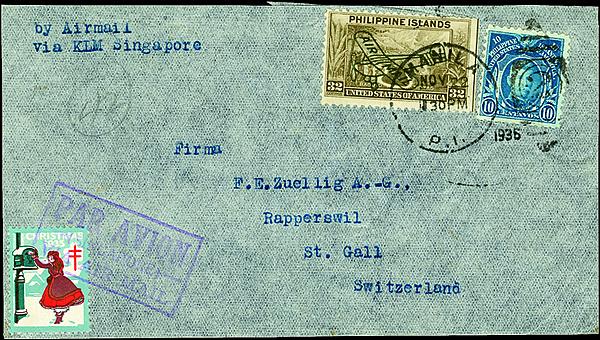 These two covers from 1934 and 1935 are new earliest known uses of Christmas seals from those years; unusual in that they come from Jamaica and the Philippines, respectively. 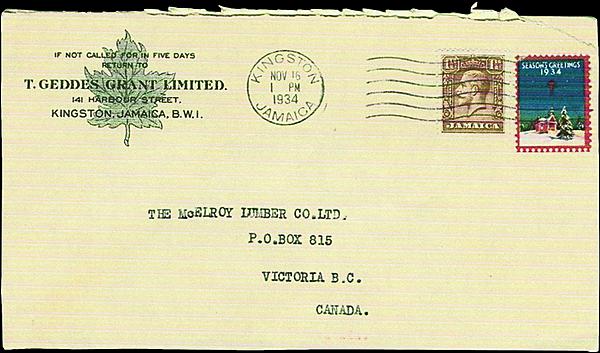 It has been an exceptional year for new reports of earliest known uses (EKUs) of United States Christmas seals released in 1908 to 1935. The years 1907 and 1936 to date have established first days, but 1908 to 1935 seals were, it seems, released when local tuberculosis associations chose to do so.

Records were not kept, so it has been fun to track new discoveries and watch the EKU dates move backward.

All of these are reflected in bold italics in the updated table on this page. Three of the seven updates are usages from outside the continental United States: 1931 (Philippines), 1934 (Jamaica) and 1935 (Philippines). The 1934 and 1935 covers are pictured here.

The probable explanation is that shipments in this era went by boat, which took a long time. The National Tuberculosis Association likely sent the seals very early, in recognition of the fact that the transit time for the seals to reach outlying islands would be lengthy, and when used on Christmas cards mailed back to the United States, the travel time would be equally long.

Collectors George Painter and Doug Leh­mann have suggested that the NTA told the territories to use the seals as soon as they were received. I am indebted to Leh­mann (who died in September), Painter and Lou Caprario for this year’s reports.

If any reader can advance any EKU date for a Christmas seal in the list, please contact me, John Hotchner, Box 1125, Falls Church, VA 22041; or by e-mail atjmhstamp@verizon.net.

For those with an interest in Christmas seals, I can recommend a national club that delves into the history of Christmas seals and the many varieties and uses of them. It is the Christmas Seal and Charity Stamp Society, which sponsors catalogs for U.S. and foreign seals, publishes an excellent journal that highlights both modern and older material, and runs a club auction. Annual dues are $20 with checks made out to CS&CSS.

More information about the group is available at www.seal-society.org; from membership chair Paul Clemmensen, 3879 Forester Court, San Jose, CA 95121; or via e-mail at paulclem@pacbell.net.

Batman sweeping into a troublesome situation, cape flying behind him, on one of the new forever stamps honoring the Dark Knight, seems like a good subject for the December cartoon caption contest. Santa Claus, he ain’t, but to those suffering the ravages of crime in Gotham City, he is just as welcome.

And using that stamp gives me an opportunity to wonder aloud: Why are eight new stamps needed to commemorate a subject that was previously included in the 2006 stamp program as part of the 39¢ DC Comics 20-stamp pane?

And why on Batman’s 75th anniversary, when statehood anniversaries and other serious historical events are restricted to 50th or even 100th anniversaries? It would appear that financial motives again are the primary motivator.

Granted, the pane of 20 Batman stamps is clever and interesting, but given the equally clever and interesting annual Civil War panes that are limited to two designs, Batman seems both less necessary and an excessive effort to boost revenue. At least it isn’t the 20-different Harry Potter stamp debacle.

Does the Postal Service understand that by making new-issue collecting more expensive than it needs to be that it is making collecting less attractive to youth, and prompting many tried-and-true collectors to leave off collecting mint U.S stamps? If the USPS objective, as has been said, is to make stamps interesting and attractive to new collectors, I would submit that this is not the way to do it.

Back to the contest. I want you to put on Batman’s mask and cape, and tell me what you think he might say about crime fighting, today’s world, stamp collecting or anything else that interests you.

Two prizes will be given, one each for the best philatelic and nonphilatelic lines. The important thing is to use your sense of humor, because entries with a humorous twist have the best chance of winning a prize.

Put your entry (or entries) on a postcard if possible and send it to me, John Hotchner, Cartoon Contest, care of Linn’s Editor, Box 29, Sidney, OH 45365; or e-mail it to jmhstamp@verizon.net.

For each winner, the prize will be the book Linn’s Stamp Identifier, published by Linn’s (a retail value of $12.99), or a 13-week subscription to Linn’s (a new subscription or an extension). To be considered for a prize, entries must reach Linn’s no later than Dec. 22.