This imperforate vertical pair of the 1863 3¢ green playing cards revenue stamp will be offered Dec. 16 when items from the Daniel B. Curtis collection are auctioned by Robert A. Siegel. 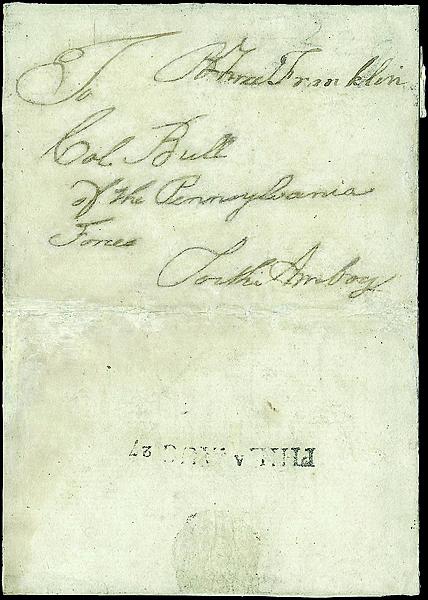 From the collection of George J. Kramer, a 1776 folded cover from Benjamin Franklin bearing his “B. Free Franklin” free frank as continental postmaster general will be auctioned Dec. 15 by Robert A. Siegel at the firm’s galleries in Manhattan.

Robert A. Siegel Auction Galleries of New York City will offer material from two important collections in a pair of sales slated for Dec. 15 and 16.

The sales will take place at the Siegel galleries in Manhattan.

Postal history from the George J. Kramer grand prix collection of U.S. domestic mails 1776-1869 will be auctioned Monday afternoon, and part I of the Daniel B. Curtis collection of United States revenues will be sold in two sessions on Tuesday.

Kramer is a top researcher, collector and exhibitor of U.S. postal history, and his exhibit of early U.S. domestic mails was chosen as the American Philatelic Society’s Champion of Champions exhibit for 2003. It went on to garner the Grand Prix d’Exposition at Pacific Explorer 2005 in Australia, and the Grand Prix d’Honneur at Brasiliana 2013 in Brazil.

The auction offers elements of this prize-winning exhibit, with Kramer retaining some items for new exhibits that are being assembled.

There is much for collectors to choose from, beginning with covers from U.S. founding fathers George Washington, John Adams, Thomas Jefferson and Alexander Hamilton signed with their respective free franks, along with a rare free frank from Martha Washington.

A marvelous 1776 “B. Free Franklin” free frank from Benjamin Franklin as continental postmaster general is on a folded cover addressed to Colonel Bull of the Pennsylvania Forces at Perth Amboy, N.J.

The cover is additionally marked with a straightline “PHILA AUG 27” postmark.

Siegel identifies the cover as an extremely rare Franklin free frank as postmaster general of the continental post, with the “B. Free Franklin” syntax used less than one month after the signing of the Declaration of Independence.

The U.S. revenue collection of Daniel B. Curtis, a respected philatelist who died earlier this year, is particularly noteworthy for the number of unused revenue stamps and multiples it contains.

“Multiples were also a special subject of interest for Mr. Curtis,” notes Siegel president Scott R. Trepel, “and the website he started — thecurtiscollection.com — presents a census of Revenue multiples, updating the work of George Turner.”

Trepel adds that the website and census will continue, maintained by the Siegel firm.

An early lot offers an imperforate vertical pair of the 3¢ playing card revenue (Scott R17a), one of just seven known pairs of this issue that are recorded. No other multiples are known.

Siegel describes the pair as having “large margins to clear, deep rich color and proof-like impression, light manuscript cancel,” and notes that the top stamp has a tiny pinhole at bottom.

The pair is offered with a 2000 certificate from the Philatelic Foundation, and is listed with the $90,000 value for the pair found in the 2015 Scott Specialized Catalogue of United States Stamps and Covers.

Collectors also will find second-issue and third-issue revenues in the Curtis sale, along with inverts, 1898 provisionals and proprietary issues.

The auction offers a selection of the beautiful “Persian Rug” revenue issues, including a trial color proof of the $200 stamp (the small Persian Rug), and a fabulous $500 stamp (the large Persian Rug) with fully imprinted sheet margins at the sides and original gum, even though the stamp is marked with manuscript cancels.

The Dec. 17-19 sale of U.S., possessions and Confederate States stamps and postal history includes material from the Peter Lesnick collection of quality unused 19th-century U.S. stamps, a collection of telegraph stamps, and items from the Calvet M. Hahn collection.

This sale is particularly strong in classic U.S. stamps, with singles and multiples, used and unused. U.S. postal history in this sale also includes colonial period, Revolutionary War, the Confederate States material and much more.

The extensive selection of telegraph issues includes covers and stamps in singles and multiples.

Also on offer are carriers, locals and independent mails.

Lots from these auctions can be viewed online, and bids can be placed through the Siegel website at www.siegelauctions.com.