Nicaragua in the era of revolution 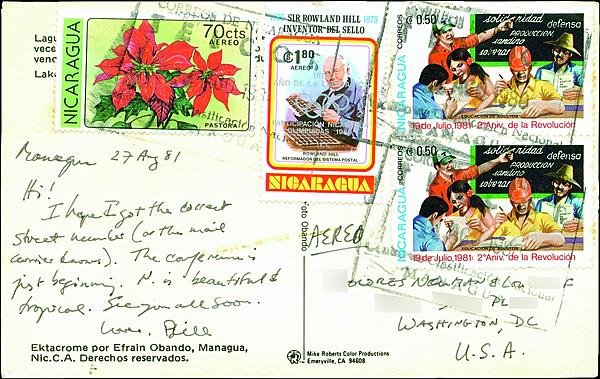 In July 1979, guerrilla forces of the Sandinista National Liberation Front overthrew the dictatorship of Anastasio Somoza and established a provisional government in Nicaragua. The stamps on this Aug. 27, 1981, postcard from Managua to Washington, D.C., illustrate postal aspects of that turbulent era.

Most interesting is the 1.80cor Rowland Hill airmail stamp overprinted in silver to commemorate 1979 as Literacy Year and Nicaragua’s participation in the 1980 Summer Olympic Games, part of a set issued April 7, 1980. It is unlisted by Scott, but is No. 2088b in the German Michel catalog.

The Scott catalog omits all the Nicaraguan issues of 1980, most of which consist of provisional overprints applied to older stamps and souvenir sheets that are listed. But the Rowland Hill set is not known to exist without overprints in red or silver ink. Evidently it was a six-denomination commemoration that had been prepared by the post office before the revolution but not yet issued.