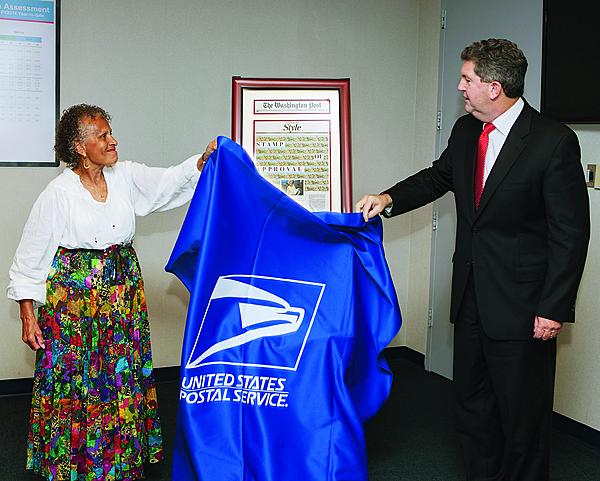 When stamp collectors look at the legacy of Postmaster General Patrick Donahoe, they should recall the story of Joan Tittle, a 78-year-old retired physical education teacher from Philadelphia.

Go to any first-day stamp ceremony on the East Coast, and you would be likely to bump into Tittle, a diminutive gray-haired woman.

That’s what happened to Don­ahoe at the Aug. 7 dedication of the Farmers Markets forever stamps in Washington, D.C.

Not once, but several times the two bumped into each other as Tittle pursued Donahoe through the crowd to get him to autograph several batches of programs she had accumulated.

That determination and her zest for first-day events impressed both Donahoe and Jessica Contrera, a writer for the Washington Post.

Her account of Tittle weaving through the event seeking autographs filled most of the front page of the paper’s Style section the next day.

“…Collector is too dull a word to describe her pursuit,” Contrera wrote. “…She wants them all.”

So Donahoe held a luncheon for her at USPS headquarters several weeks later.

At the Oct. 8 lunch, the postmaster general presented her with a framed copy of the Washington Post article and a handwritten note praising her for her zest for stamps.

The Farmers Market stamp ceremony was the third she had attended in two weeks, and she was back in Washington for the Christmas Magi stamp on Nov. 19.

Her zeal has made her a familiar face to postal first-day crews. They make certain she gets a good seat and programs for her collection.

Janet Klug, chair of the Citizens’ Stamp Advisory Committee and one of the guests at the Tittle luncheon, said: “I have known Joan for quite some time, mostly chatting with her while signing programs at stamp dedications.”

Tittle does have other interests. The Philadelphia Eagle football team, for one. She has missed only one home game since 1958, she told the Washington Post.

Her husband, George, understands his wife’s stamp passion and can be found at many of the ceremonies following behind with bags filled with the stamps and programs she has secured.

“I know I’m out of control,” she told the Washington Post.

For Donahoe, however, he no doubt wished there were more collectors with the passion of Tittle.

“The PMG is a collector and so am I,” said Klug. “So I hope he has a good opinion of stamp collectors. I know he loves stamps.”