Pushing the envelope in the years just before U.S. postal reform 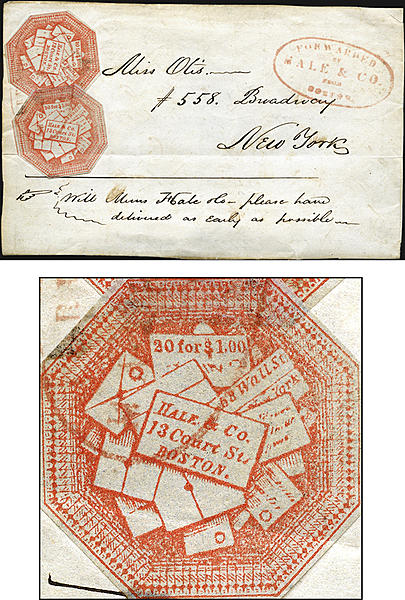 A March 23, 1846, cover forwarded by the Hale & Co. independent mail firm, with an enlargement of one of the stamps showing illustrations of both envelopes and folded letters. From the National Stamp Collection in the William H. Gross Stamp Gal 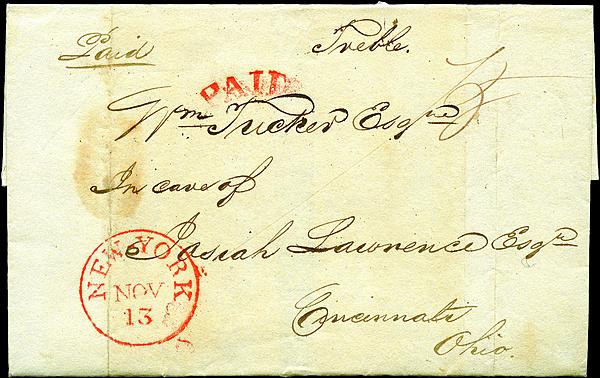 “Treble” written at the top of this folded letter indicates three sheets of paper; accordingly, the 25¢ rate from New York to Cincinnati was multiplied by three for total postage of 75¢. From the National Stamp Collection in t

The National Postal Museum’s education department sponsors a monthly gathering of letter writers and mail artists. Recently I gave them an impromptu lesson on the history of envelopes at the frames in the National Stamp Salon of the museum’s William H. Gross Stamp Gallery, and I thought I’d share some of my talk here.

The folded letter was king until the mid-19th century because domestic letter postage was based on distance multiplied by the number of sheets of paper. Double and treble letter rates at the post office were a favorite target of 19th-century reformers.

The January 1845 American Review railed against them as “the climax of absurdity,” adding that “the only nation in the world which ever practiced it besides ourselves, was the mother from whom we inherited it.”

Most correspondents preferred to avoid extra charges by folding their letter up and writing the address on the outside of the same sheet.

If a wrapper was desired, one simply added another sheet of paper rather than stock specialty envelopes.

Urban letter writers who participated in the independent mail company craze of 1844-45 may have been more inclined to embrace the envelope. Folded letters jockey for attention with a lone envelope on the octagonal blue and red stamps issued by the independent mailer Hale & Co. (listed in the Scott Specialized Catalogue of United States Stamps & Covers as U.S. local stamps, Scott 75L1-75L6).

Increased privacy may have been another benefit. The American Review writer fretted that busybody postal clerks counted the sheets in a letter as a pretense to “spy into them — poke them open — present them to a strong light, and endeavor to see through them.”

The 1847 postal reform law that introduced postage stamps also established weight as the basis for postage rates rather than the number of sheets of paper. This paved the way for wider use of envelopes, but old habits die hard.

I’ve never seen a statistical analysis of when envelopes finally overtook folded letters, but it was probably not until postage rates were further reduced in the 1851-55 period. This corresponds to the popularity of stamped envelopes, first sold by the post office in 1853.

Today’s postal historians scrupulously differentiate between envelopes and folded letters, but the distinction is a purely modern one.

The French enveloppe was anglicized as early as 1715, and those who wrote the letters we now collect would have used the words synonymously.

Lastly, the phrase “pushing the envelope” — the title of the National Postal Museum’s blog, incidentally — has nothing whatever to do with letters or mail.

An aircraft’s maximum speed, altitude, and maneuverability are referred to as its safety envelope. Pilots who operate their vessel beyond these parameters are said to be “pushing the envelope.”

Daniel Piazza is the Smithsonian chief curator of philately.