Research uncovers new details about use of invalid stamps 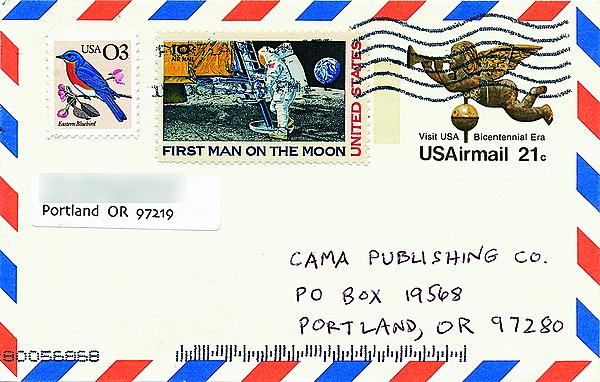 This postal card demonstrates a valid post-1975 use of airmail postage to pay a first-class rate. The 21¢ airmail Bicentennial Era card was mailed in October 2014. A 10¢ airmail stamp and a 3¢ definitive were correctly used in combination with the postal card’s imprinted postage to fully pay the 34¢ first-class postcard postage of the time.

Only the franking is shown from a Nov. 4, 2014, letter mailed with a 20¢ commemorative stamp and a 30¢ special delivery stamp, together overpaying by 1¢ the 49¢ first-class domestic letter rate. The invalid use of the special delivery stamp was allowed and, interestingly, is a common occurrence.

The previous Modern U.S. Mail column in Linn’s Nov. 10 issue was titled “Invalid postage on domestic U.S. mail from 1954 to the present.”

What drove that column was the question of whether, in 2000, special delivery stamps were valid as postage on Express Mail.

I was able to document that from at least Oct. 18, 1954, to the present, special delivery stamps were not valid for postage on United States domestic and international mail.

I’ve written this follow-up because of added research I have done, and because of feedback I have received since the last column was published.

In this week’s article, I will share the results of this added research; describe uses that seem to be common, although not valid; and discuss the rules for using airmail postage that have been reported over the years.

I made the statement in last month’s column that I was unable to find any earlier statement concerning the validity of the use of special delivery stamps before the Oct. 18, 1954, Postal Manual. That is no longer true.

The U.S. Post Office Department published its U.S. Official Postal Guides from October 1874 until 1953. The yearly volumes are known to many philatelists, but what may not be so universally known is that from 1874 to 1880 there were also quarterly supplements published, and from 1880 until 1953, monthly supplements were published.

At present I am overseeing the publication of all of these volumes. So far, only those from 1874 to 1900 have been scanned.

What I have discovered in reading each and every issue is that there are significant reports in many of these where the information is not found in other documents such as the Postal Bulletins. (I have made the Postal Bulletins available online at www.uspostalbulletins.com).

From the September 1885 Postal Guide until the 1902 Postal Laws and Regulations of the United States of America, we find: “Under no circumstances are they [special delivery stamps] to be used in the payment of postage of any description, or of the registry fee … ”

This statement, or one like it, is no longer found after 1902.

On the other hand, in spite of these statements that such uses were invalid, such uses of invalid postage where the misuse was not caught are common.

For instance, the day before this column was written, a mailed envelope arrived franked only with a 20¢ Louisiana World Exposition stamp (Scott 2086) and a 30¢ Hand to Hand special delivery stamp (E21), together overpaying by 1¢ the 49¢ first-class domestic letter rate.

Needless to say, this invalid use was allowed and, interestingly, is a common occurrence.

Although I will not show other such examples of illegal uses for other types of matter that are officially not allowed as postage, there are many other examples known.

Mailers have also questioned the circumstances under which airmail postage is valid.

The first mention concerning the validity of airmail stamp use is found in Postal Bulletin 13515 (July 9, 1924): “The air mail stamps have been provided for use on mails dispatched by the new air mail service and their use for any other purpose should be discouraged.”

Postal Bulletin 14282 (Jan. 17, 1927) states that a new 20¢ airmail stamp and other airmail stamps are lawfully valid for postage on any mail matter, but that their use should be restricted, as far as practicable, to matter that will be dispatched by airmail, for which the stamps are specifically intended.

The Postal Bulletin 14473 (Aug. 29, 1927) clarified matters even further, stating, “ … the use of air-mail stamps in payment of postage, or the special-delivery fee or special-handling postage, on other than air-mail, is exceedingly objectionable and not approved. Postmasters should advise their patrons accordingly and make every possible effort to confine the use of air-mail stamps to the payment of the postage and fees on matter which is to be given air-mail service.”

Note that the Post Office Department referred to this mail classification as “air mail” before the 1950s, “air-mail” also prior to the 1950s, and “airmail,” during the 1950s and after.

In Postal Bulletin 14687 (May 11, 1928) we find the most definitive statement concerning the permitted use of airmail stamps that was also subsequently found in the 1932, 1940, and 1948 editions of Postal Laws and Regulations of the United States of America: “The use of air mail stamps on other than air mail is not permissible.”

Considering the earlier statements from 1927, I believe this later regulation still allowed the payment of special fees on airmail items with airmail stamps. This remained true until the Dec. 15, 1975, Post Office Services Transmittal Letter 39 that stated in Section 142.125 that “Airmail postage stamps may be used to pay regular postage and fees for special services.”

The postal card shown on page 27 demonstrates such a valid use of airmail postage to pay first-class postage.

Along with the 21¢ postage imprinted on the card, a 10¢ First Man on the Moon airmail stamp (Scott C76) and a 3¢ Eastern Bluebird definitive (2478) were correctly used to fully pay the 34¢ domestic first-class postcard postage of the time.

In other words, since 1975, airmail postage was allowed to pay first-class postage as well as postage and fees on all classes of U.S. mail.

Incidentally, since the Nov. 10 article, there is one more piece of personal research I have done that uncovered the following information. As of Oct. 24, 1951 (reported in Postal Bulletin 129480 of Oct. 18, 1951): “United Nations postage stamps will be valid for postage only on mail deposited at the United Nations Post Office Station. Should any articles of mail matter with United Nations stamps affixed thereto be deposited at any United States post office, including those in our possessions and Territories, they will be considered as unpaid and treated in accordance with the existing regulations.”