Save some bucks on expertizing by eliminating obvious alterations 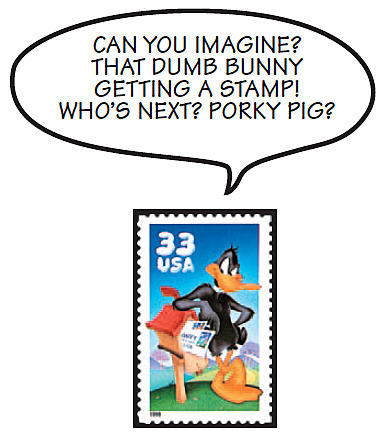 David Schwartz wins one of two prizes in the October cartoon caption contest with this line that seems to predict the future. Daffy Duck was only one of the characters featured on five stamps in the Looney Tunes series issued from 1997 to 2001. The nex 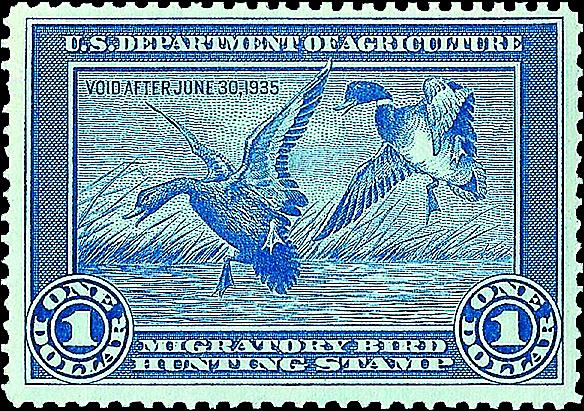 The first in an unbroken line of federal migratory bird hunting stamps that dates from 1934 to the present, these large revenue stamps for hunting licenses are notable for their beauty and high quality printing. 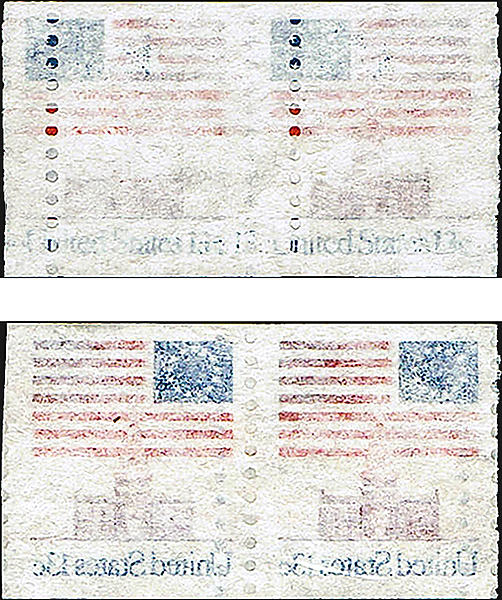 Seen from the front and the back, these pairs are the result of trying to pull apart lick-and-stick stamp coil rolls that were affected by moisture, causing the stamps to stick together like a small brick. Such items have been submitted for expertizati

Striking color varieties such as these have been created on purpose by collectors drawn to experimenting with chemicals to see what effect they might have on stamps. Some are identified as experiments on the back of the stamp, and others are not.

Some orange and yellow U.S. stamps from the Civil War until the 1930s have changed from their original colors to variations of brown and orange brown. They have been affected by sulphur in the air.

On top is the 1998 nondenominated H-rate (33¢) Hat stamp, as issued, with its normal gray hat brim. On the bottom is a variety with a green hat brim that is sometimes thought to be an error — but it is not.

In the previous column in this U.S. Stamp Notes series on expertizing (Linn’s, Oct. 27, page 6), I started looking at some of the patients (stamps) sent in for expertizing where the submitter could have saved themselves the fee through their own careful observation.

Granted, someone new to the hobby might not have the knowledge to be able to see the obvious, but this is where your local stamp club can be a resource.

If there is a stamp club near you, join it. In addition to the enjoyment of fellowship and new sources of stamps for your collection, the amount of knowledge that is available from other members will amaze you.

Take your question-mark stamps to the club before writing a check for expertizing. Often members will be able to save you the fee, not to mention the wait to find out what you have.

They also can tell you if they think it’s worthwhile to send the item in.

Today, I will discuss items recently sent in for authentication that need not have been expertizing candidates.

This sort of item might be sent in despite the fact that there is no catalog listing for such a variety, but the owner has an abundance of enthusiasm and the hope that he has discovered something new.

In 1998, the United States issued its group of nondenominated H-rate (33¢) Hat stamps. On the vast majority of the Hat stamps, the hat brim is gray, but once in a while you will see a stamp that has a green hat brim.

Is it a rare and valuable error?

On top is the 1998 nondenominated H-rate (33¢) Hat stamp, as issued, with its normal gray hat brim. On the bottom is a variety with a green hat brim that is sometimes thought to be an error — but it is not.

We know that color errors are listed in the Scott Specialized Catalogue of United States Stamps and Covers, but checking there reveals no listing for a green hat brim error.

This is the first clue that it’s time to tone down the enthusiasm level.

If something that is found 15 to 20 years after it’s issued is not in the catalog, there is a very high probability that it is not a genuine error, or that the variety itself is not of sufficient significance to be listed.

In the case of the Hat variety, it is a post-production changeling. The gray color is a composite of various pigments, and something in the ink responds to prolonged exposure to bright light by morphing the visual color from gray to green.

Put it in your album as an interesting variety, but don’t send it for expertizing as an error.

A similar variety affects some U.S. stamps of the late 19th and early 20th centuries printed in orange and sometimes yellow ink.

Four examples shown here have changed from those colors to variants ranging from chocolate brown to orange brown.

These are not errors, but rather, the result of sulfurization from chemicals in the air.

Some orange and yellow U.S. stamps from the Civil War until the 1930s have changed from their original colors to variations of brown and orange brown. They are genuine stamps, but have been adversely affected by sulphur in the air.

If not too far gone, the darkening effect can be reversed by carefully applying a little bit of hydrogen peroxide diluted in water. Before you try this on mint stamps, practice on cheap used examples.

And speaking of applying chemicals, there are some really amazing-looking stamps around that have been intentionally altered to create visually arresting varieties.

Why would someone do this? I suppose it is the same reason man climbs mountains. Anything man can conceive, man will try.

Striking color varieties such as these have been created on purpose by collectors drawn to experimenting with chemicals to see what effect they might have on stamps. Some are identified as experiments on the back of the stamp, and others are not.

Sometimes these intentional experiments will be marked on the back as being chemically transformed, but not always.

There is another resource for determining whether you have a stamp worth expertizing. The American Philatelic Society has a “Quick I.D.” service that can often identify the sorts of items discussed in this and prior columns, at a substantially lower cost than the formal expertizing process. It is open to APS members at $5 per scanned item and $10 for nonmembers.

The collector provides a digital scan of each item to be identified, and sends it to Quick I.D. as a GIF or JPG digital file.

Or a good quality color photocopy of the item can be submitted with payment to APS Quick I.D., 100 Match Factory Place, Bellefonte, PA 16823.

For additional information, visit http://stamps.org/stamp-identification, or contact Mercer Bristow by e-mail at ambristo@stamps.org, or by telephone at 814-933-3803.

One more easy-to-spot variety that is not genuine is from the era of lick-and-stick stamps, specifically with coil stamps from rolls that were subjected to moisture. The result is a roll that is stuck together, resembling a small brick.

Since such a roll of stamps with higher face values represents a significant amount of money, owners will often try to pull them apart. They would do better to soak them apart, because pulling them apart results in stamps that look like the stamps shown here.

Seen from the front and the back, these pairs are the result of trying to pull apart lick-and-stick stamp coil rolls that were affected by moisture, causing the stamps to stick together like a small brick. Such items have been submitted for expertization as errors, but they are merely damaged stamps.

This is because the bond of the paper on which stamps are printed is weaker than the bond created by the moistened gum. When the stuck stamps are pulled apart, it leaves part of the paper with gum above the design, and the stamps are so thin when looked at from the back that they seem to be printed in reverse on the back. This is easily mistaken for some sort of rarity.

In fact, they are just damaged stamps with no value, since they will not even pass for postage. There is no point in spending money to have them expertized.

I intend to revisit the matter of varieties that are not genuine at some point down the line, but December’s expertizing column will deal with at least a couple of Christmas stamp color misregistrations that mimic missing colors. In January, we will look at the question raised by a reader of when it makes financial sense to pay for the cost of expertizing something that appears to be a genuine stamp or variety.

Daffy Duck wasn’t the first duck on a U.S. stamp, but he is clearly the duck with the most personality — at least to us humans.

Daffy appeared on the 1999 33¢ stamp that also served as the October cartoon caption contest stamp.

As several entries pointed out, the 20¢ 1982 issue that marked the 50th anniversary of migratory bird hunting stamps was the first postage stamp to feature ducks.

That postage stamp commemorated the federal duck stamp program that began in 1932, and which produces a large and attractive revenue stamp each year featuring competitively selected duck art for the stamps that are used on that year’s hunting licenses.

Many U.S. collectors are not aware of these beautiful stamps, but they are avidly collected by those who appreciate the beauty of the basic art, and the engraving of the earlier issues.

The first in an unbroken line of migratory bird hunting stamps that dates from 1934 to the present, these large revenue stamps for hunting licenses are notable for their beauty and high quality printing.

William Meentemeyer of Sarasota, Fla., recognizes this with this entry: “I’m proud to be the most famous duck, but for 80 years they’ve pictured all my brothers and sisters!”

Steve Kotler of San Francisco, Calif., gives this a somewhat different treatment with, “They finally picked the right duck, but I should have been on a forever stamp!”

The great majority of entries this month talked about the contents of the unusual mailbox.

Adapting a favorite exclamation that Daffy sometimes borrowed from Sylvester the cat, Paul Abajian of Essex Junction, Vt., has him saying “Coupons, coupons, coupons, but nothing for succotash!”

And in a nod to Linn’s, Dieter Von Hennig of Reno, Nev., comments, “What? No Linn’s again? I better try the digital edition.”

The nonphilatelic winner comes from this group. Grieg Best of Sacramento, Calif., has Daffy musing, “Why is it ducks only get bills?”

On the philatelic side of our contest, David Schwartz seems to foretell the future with the clever line revealed here with the pictured stamp.

“Born in 1933, and my birthday cards are just arriving!” by Helen Parcells from Selbyville, Del.

“All this junk mail is driving me daffy!” sent by Boyd DeGeest of Winona, Minn.

“A card from Donald, three bills, and 37 political ads. The 2016 election is getting an early start!” from William Hyde of LaCrosse, Wis.

“Despite my star status, I’m comfortable in my own feathers!” by Edgar Dunlap via e-mail.

The next cartoon caption contest will be announced in the Dec. 8 Linn’s.