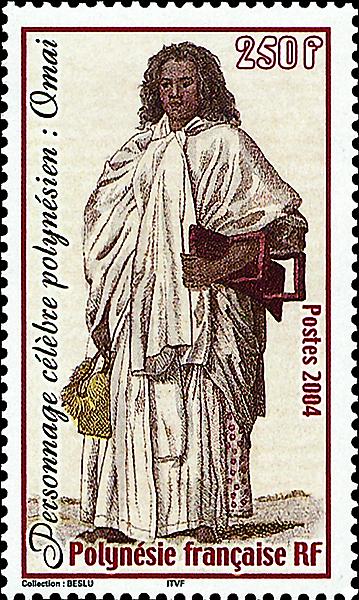 French Polynesia issued a stamp in 2004 bearing an image of Omai, a Polynesian native who traveled to England on Captain Cook’s second voyage. 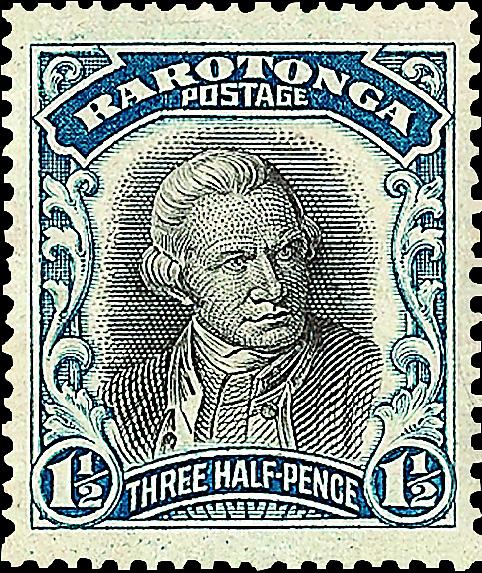 This 1920 stamp from Cook Islands (inscribed “Rarotonga”) bears a portrait of British explorer Capt. James Cook, for whom the islands are named. 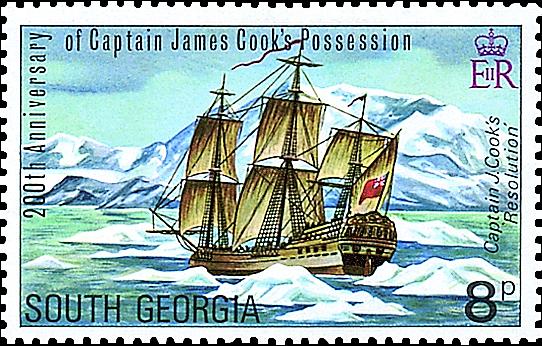 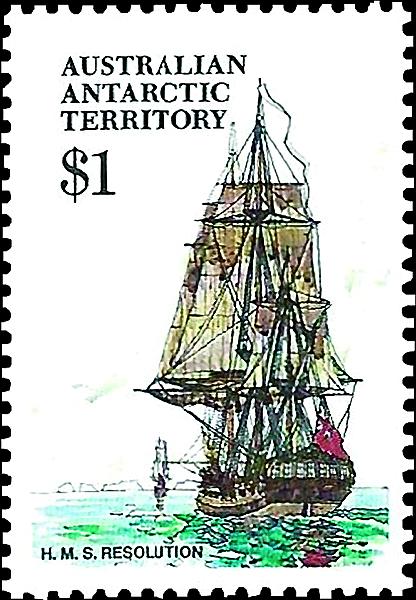 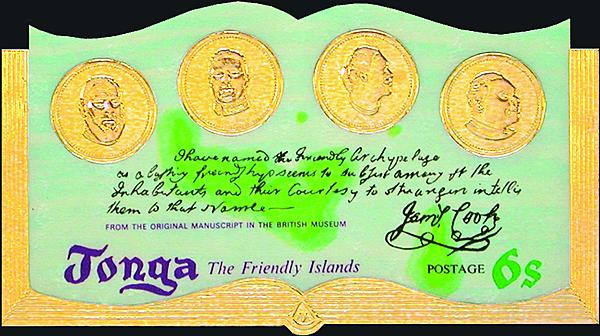 Tonga’s 6-seniti stamp issued in 1973 shows an entry from Cook’s log pertaining to Tonga. The stamp is from a set marking the bicentenary of Cook’s arrival.

Australia issued a 30¢ stamp in 1970 depicting Cook, his ship Endeavour, native Australians, a sextant and a kangaroo. 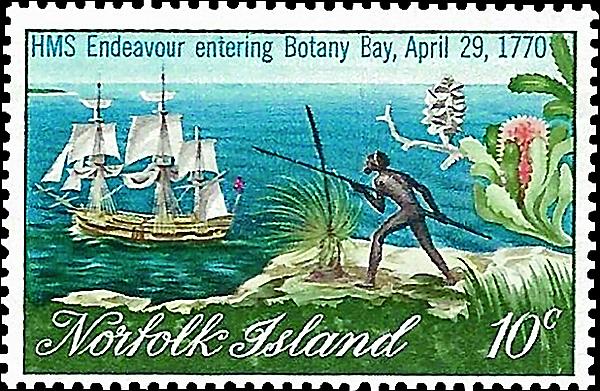 Norfolk Island commemorated the entry of Cook and the HMS Endeavour into Botany Bay on this 1970 10¢ stamp. 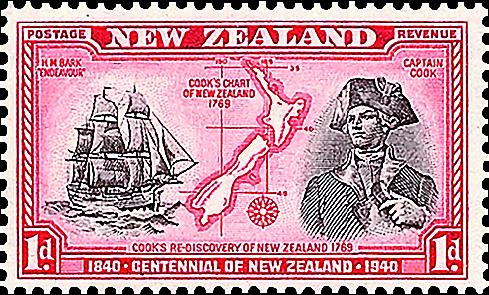 Cook’s mapping of the islands of New Zealand was commemorated on a 1940 stamp from that country.

Norfolk Island issued a se-tenant pair of stamps in 1979 marking the 200th anniversary of the death of Captain Cook. 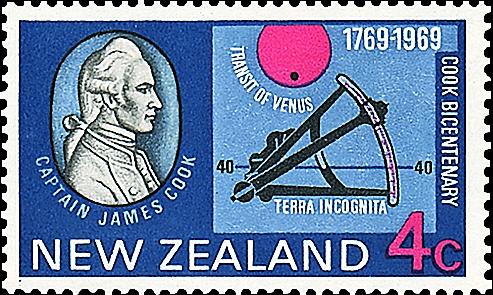 Capt. James Cook was not the first European to set sail for the Pacific Ocean.

Nevertheless, when he embarked on his first South Seas expedition aboard the HMS Endeavour in August 1768, Cook, along with his crew, began the first of three fateful adventures of scientific and geographic discovery.

His route would cross the Atlantic Ocean, circumnavigate South America and linger across the Pacific before heading home to England via the Indian Ocean and Cape of Good Hope.

Stamp collectors can follow these exhilarating South Pacific adventures by assembling a topical collection of the milestones of Cook’s journeys.

Cook’s first order of business was to observe the transit of Venus across the sun. Cook and two scientists on board, Charles Green and Daniel Solander, accurately recorded the transit that would lead to future improvements in navigation.

Their experiences were commemorated in 1969 on a 4¢ stamp from New Zealand (Scott 431). The design includes the image of Venus moving across the sun.

From October 1769 to February 1770, the Endeavour circumnavigated New Zealand.

Cook charted the coasts of New Zealand’s north and south islands, which New Zealand commemorated in 1940 on a bicolor 1-penny stamp (Scott 230).

From April to August 1770, Cook sailed the Endeavour along the east coast of Australia, exploring and charting.

The Endeavour continued north and struck the Great Barrier Reef on June 10.

Once the ship was repaired, Cook set sail for home, arriving in Britain in July 1771.

In 1970, Australia issued a set of six stamps (five 5¢ stamps and one 30¢ stamp) and a souvenir sheet commemorating the bicentennial of Cook’s arrival in Australia (Scott 477-482).

The 30¢ denomination attempted to include all of the important elements shown in the strip of five 5¢ stamps.

By July 1772, Cook had prepared for a second voyage with two vessels, HMS Resolution and HMS Adventure.

This journey sailed around Africa and continued south to the Antarctic Circle Jan. 17, 1773.

The two ships were separated in a fog but met in New Zealand in February 1773.

By August the ships were in Tahiti, and in October Cook set foot for the first time on Tonga, which he had named the Friendly Islands.

Tongan stamps issued in 1973 commemorate the bicentennial of Cook’s arrival in Tonga. A set of five (Scott 327-331) shows an entry from Cook’s log reporting about Tonga.

The two ships were separated shortly after leaving Tonga and missed each other in New Zealand. HMS Adventure returned to England in July 1774. The journey for HMS Resolution recommenced heading south in search of the southern continent, but was aborted due to ice and cold.

By March 1774, Cook had navigated Resolution to Easter Island and then made a sweep of Pacific islands, including Tahiti, Cook Islands, New Caledonia and Norfolk Island. Resolution traveled the southern ocean, heading for the Atlantic.

Cook stopped at South Georgia and took possession of the island for Britain on Jan. 17, 1775.

In 1975, South Georgia (then a dependency of the Falkland Islands) issued a stamp marking the bicentennial of Cook’s “possession” with a stamp that shows HMS Resolution sailing among the ice in Possession Bay (Scott 42).

In 1776, Cook was engaged to find the Northwest Passage on a third voyage. Two ships, HMS Resolution and HMS Discovery, were chosen for the third voyage.

The master of HMS Discovery was William Bligh of HMS Bounty fame. Bligh would go on to become a well-known Pacific adventurer.

The two ships headed south to Cape Town and then to Tasmania, New Zealand and Cook Islands, which are named for Cook.

Cook Islands has issued many stamps for its namesake, beginning in 1920 with a 1½d bicolor stamp (Scott 63).

The next stop was Raiatea, an island in what is now called French Polynesia, to return a young Polynesian man (Omai) who sailed to England with Cook on the second voyage two years earlier.

In January 1778, Cook set sail for Hawaii, where he and his crew received an initial warm reception.

In May, Cook began the quest for the Northwest Passage, taking him to Alta California, Oregon, Vancouver Island, Alaska and the northeast coast of Russia, where his ship incurred some damage.

Cook returned to Hawaii to affect repairs. He was killed at Kea­lakekua Bay on Feb. 14, 1779.

In 1979, Norfolk Island issued a se-tenant pair of stamps to mark the bicentennial of Cook’s death (Scott 243a).

An outstanding resource exists for those interested in forming a Captain Cook topical collection. The Captain James Cook Society has a wonderful website at www.captaincooksociety.com. In addition to a great deal of assembled information and history, there are several checklists of hundreds of Captain Cook stamps that have been issued over time.