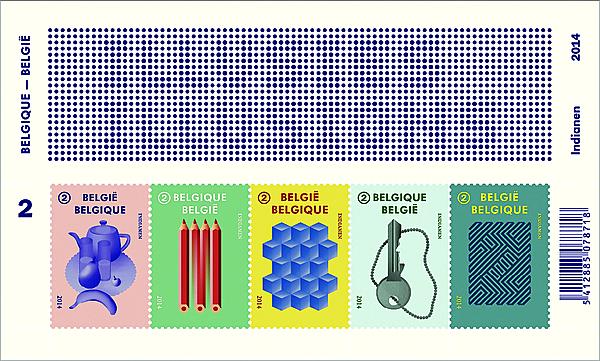 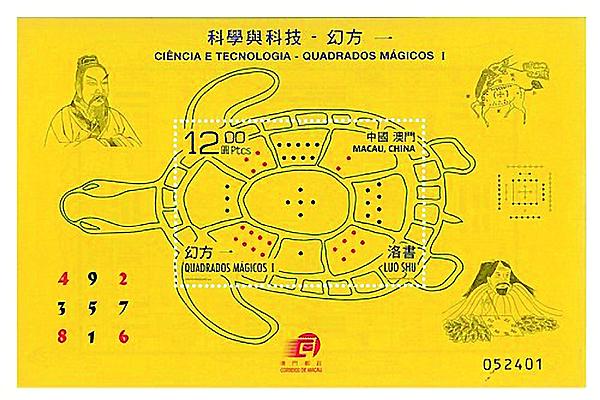 A souvenir sheet from Macau illustrates the myth of a turtle from the Luo River revealing a nine-by-nine magic square on its back. This magic square is called luo shu. 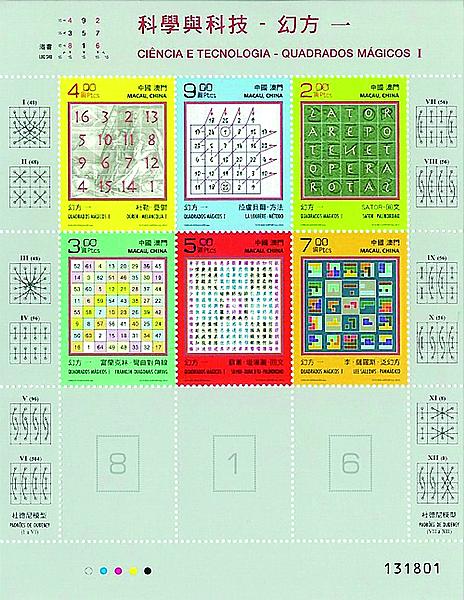 New stamps from Macau and Belgium present challenges for the mind and the eye, respectively.

A set of six stamps and a souvenir sheet from Macau feature magic squares. Merriam-Webster’s Collegiate Dictionary defines a magic square as: “a square containing a number of integers arranged so that the sum of the numbers is the same in each row, column, and main diagonal and often in some or all of the other diagonals.”

Issued Oct. 9, the Magic Squares set is the latest in Macau’s Science and Technology stamp series that began in 2001.

In announcing the new stamps, Macau Post said it was aiming not only to present the scientific and cultural aspects of magic squares, but “to create a unique product in the history of philately.”

One of America’s founding fathers, Benjamin Franklin, also was fascinated with magic squares.

One of Franklin’s creations is represented on the 3-pataca stamp from Macau. The inscription at lower right in the design reads, “Franklin Diagonais Curvas.” The latter two words refer to bent diagonal magic squares.

Franklin reportedly created this type of magic square to fight boredom while working as a clerk for the Pennsylvania Assembly.

Another familiar name found in the inscriptions on the stamps is that of Albrecht Durer (1471-1528), the German artist and printmaker. The 4pa stamp shows his Melencolia I.

The new-issue announcement from Macau Post describes this work: “Melencolia I is an engraving that includes in the upper right corner, under the bell, a normal associated magic square of doubly-order with extraordinary mathematical properties. The magic sum is 34 and the two middle cells of the bottom row show the date of the engraving, 1514.”

At the time he came up with this formula, he was serving as ambassador to Siam (present-day Thailand), so it also is called the Siamese method.

In posting a picture of the new stamp on his website, www.leesallows.com, he wrote: “Trying to unlock the secrets of magic squares has been the ruling passion of my life over the past 50 years. It has been a very fulfilling experience, and given the choice, I would happily do it all over again.

“In particular, nothing has exceeded the sheer excitement and intellectual pleasure I took in the exploration of a fascinating new world revealed through the emergence of two-dimensional or geomagic squares. That I was lucky enough to be the first to go prospecting in that land was a privilege I probably didn’t deserve, but certainly appreciated and enjoyed in full measure.”

Two of the stamps feature words, rather than numbers or shapes. The 2pa stamp shows a sator, or rotas square, a palindrome with the five words — sator, arepo, tenet, opera and rotas — that can be read forward, backward, upward and downward. The oldest known example of the sator square was found in the ruins of Pompeii, which was destroyed by an eruption of Vesuvius in A.D. 79.

The 5pa stamp presents a portion of a palindrome poem in Chinese characters written by Su Hui (365-427). Macau Post explains why the poem was written: “Far away from her husband, she found out that he had taken a concubine. To console her unhappiness and try to bring him back she composed her palindrome poem, Xuan Ji Tu, an array of 29 lines by 29 columns, with 841 characters, that can be read at least in 2,848 different ways, namely, forward, backward, horizontally, vertically and diagonally.

“After reading the poem, Dou Tao left his concubine and return to Su Hui.”

The souvenir sheet contains a single 12pa stamp illustrating the myth of the revealing of the luo shu square on the back of a turtle that emerged from the Luo River. The written record of this myth dates back 4,000 years.

Carlos A. Roldao Lopes, director of Macau Post, came up with the concept for the stamps and souvenir sheet, and Carlos Concalves created the designs. Cartor Security Printers of Meauce, France, printed the issue by offset.

A sheet of five stamps issued by Belgium Oct. 27 is called Optical Illusions.

Belgium’s postal administration, Bpost, urges you to look closely at the stamps because the designs may reveal something you did not see at first glance.

The descriptions of the stamps provided by Bpost provide some clues. Starting on the left, the stamps are described as showing still-life with clown, count the pencils, cubes in motion, key in profile and find the number.

The postal administration reports that it will provide the answers in its yearbook of 2014 stamps.

The Belgian design studio De Indianen designed the stamps. They were printed by offset.