The cachetmaker’s dilemma: what to do with those extra stamps? 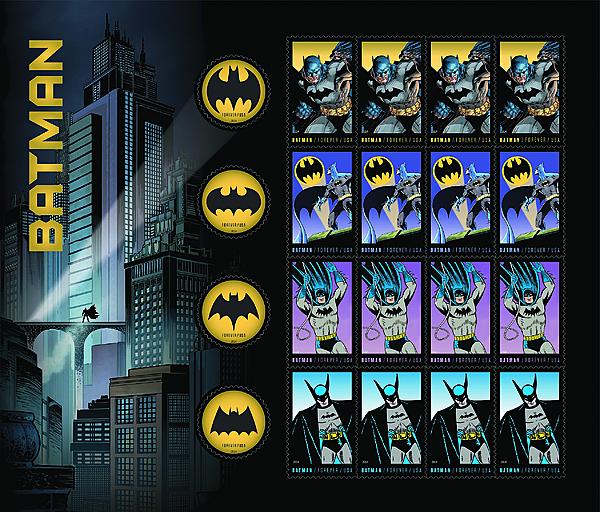 The pane of 20 United States Batman commemorative forever stamps issued Oct. 9 has eight different designs plus 12 stamps that repeat four of those designs.

The last quarter of 2014 could be unexpectedly expensive for first-day cover collectors, cachetmakers and servicers.

In order to service a set of the eight Batman stamps issued Oct. 9, a collector or cachetmaker has to buy a full pane of 20 stamps. The remaining 12 stamps on the pane, which repeat four of the eight designs, are excess.

That won’t be a hardship for individual collectors servicing one or two covers, but it might be for cachetmakers and servicers who have to contend with $5.88 of leftover stamps per set of FDCs.

Servicing 10 sets will require an outlay of $98, with 60 percent of that not being used to create the FDCs.

Or will there be a market for single FDCs of the Batman portrait stamps? Young Batman or old Batman?

There are two designs for the Dec. 5 Wilt Chamberlain issue, where one might have been sufficient, but at least there won’t be any odd-man-out stamps.

Neither of these commemorative sets was a certainty earlier in the year, making budgeting for them impossible. On the other hand, getting information about future United States issues — even near-future U.S. issues — has been a problem for FDC enthusiasts.

Here’s a tip for cachetmakers: Chamberlain hated being called “Wilt The Stilt.” He and his friends referred to him as the “Big Dipper” or just “Dipper.” In fact, the home he built in Los Angeles was called “Ursa Major,” the constellation of which the Big Dipper is a part.

Four Rudolph the Red-Nosed Reindeer designs were issued Nov. 6, but only two actually show Rudolph. Those two would have been enough. After all, two designs were sufficient for the Hot Rods issue.

Some good news for collectors and cachetmakers: The planned Rudolph souvenir sheet was canceled because of production problems. It would have had two designs on it.

Cachetmakers should also consider that 2014 marks the 75th anniversary of the first publication of the Rudolph story, by Montgomery Ward department stores in 1939. It is also the 65th anniversary of the song Rudolph the Red-Nosed Reindeer written by Johnny Marks, which was a hit for Gene Autry in 1949 and is still played every Christmas. The Gene Autry forever stamp (Scott 4449) was issued in 2009.

These anniversaries might be easier and less risky to immortalize on an FDC.

First-day cover collectors who want one of every issue (are there any left?) will have a choice to make when it comes to the $2 Circus souvenir sheet.

Although USPS Stamp Services chief Susan McGowan is on detail (temporary assignment) elsewhere in the agency (Linn’s, Oct. 27, page 1), FDC collectors might experience more of the same next year.

The U.S. stamp program is mostly drawn up years in advance, the people to whom the manager of Stamp Services reports are still in their jobs, there are few stamp collectors and no known serious FDC collectors on the Citizens’ Stamp Advisory Committee, and officially at least, the Postal Service expects McGowan to return to her permanent posting.