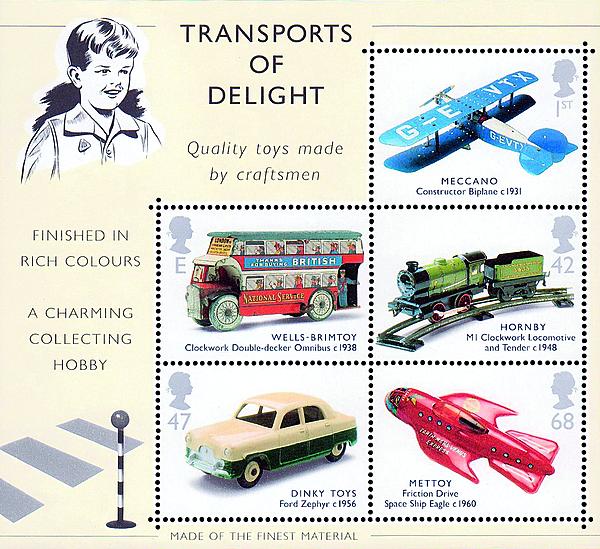 Great Britain’s most outstanding contribution to a thematic collection of toys is this souvenir sheet from 2003 showing antique toys representing five modes of transportation.

Children’s toys in a colorful, abstract design on Great Britain’s Europa stamps of 1989 are an attractive addition to a topical collection of toys on stamps. 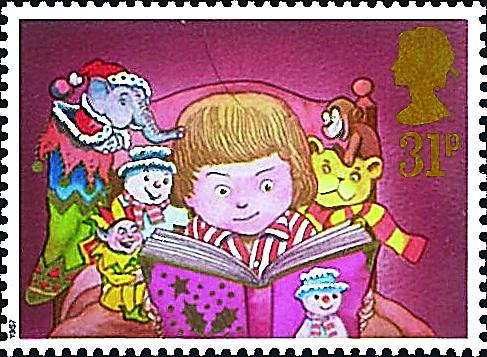 The 31-penny stamp of Great Britain’s 1987 Christmas issue shows a boy on Christmas morning reading a book to his stuffed toys.

A topical collection on the theme of children’s toys would include these three Great Britain Christmas stamps of 1968.

With around 3,000 commemoratives issued during the reign of Queen Elizabeth II, Great Britain is a rich resource for stamps for topical and thematic collections.

Take, for example, children’s toys. What child’s holiday excitement isn’t heightened by the expectation of toys under the Christmas tree?

These three stamps are predecimal issues and are the first stamps issued by Great Britain that would likely be in a topical collection of children’s toys.

It was more than 19 years before Britain issued another commemorative that fits into a topical collection of toys. The 31p denomination (Scott 1199) of the five-stamp Christmas set for 1987 shows a boy on Christmas morning reading a book to some of his stuffed animals, including a teddy bear, a monkey, and an elephant.

In 1959, several European countries formed the Conference of European Postal and Telecommunications. The purpose of this organization is to coordinate both postal and telecommunication efforts among members. Now called PostEurop, it includes more than 50 member postal administrations.

Over the years, member countries have issued stamps, often in accordance with a common theme, as a symbol of Europe’s desire for cooperation among its postal administrations. Collectors call these multination issues Europa stamps.

The common theme for 1989 was children’s games and toys. Two of the stamps in Britain’s 1989 Europa set are shown nearby (Scott 1256-1257). The CEPT Europa logo is printed finely in gold ink under the queen’s profile cameo.

The designs are bold, abstract presentations of toys, including airplanes and building blocks.

The piece de resistance of a toy topical collection of Great Britain stamps would be the souvenir sheet in the 2003 Transports of Delight issue (Scott 2157a).

The stamps also were each issued individually in sheet format (Scott 2153-2157).

The designs show photographs of toys in pristine condition against a white background.

Depending on how broad one’s definition is of what constitutes a toy, the teddy bear from the 1990 Smiles booklet (Scott 1304) could be included in a topical toy collection. This stamp is denominated 20p. A nondenominated first-class stamp showing the same teddy bear design was issued in 2005 (2318)

Also included could be the sled from the 1990 Christmas set (Scott 1343), the marbles shown on a stamp in the 1992 Greetings stamp booklet (1434), and the string puppets pictured on a stamp in the 1996 set honoring the 50th anniversary of British television programs for children (1700).

Great Britain’s commemorative stamps are a gold mine for topical and thematic collectors. What other British commemoratives would you include in a topical children’s toys collection?