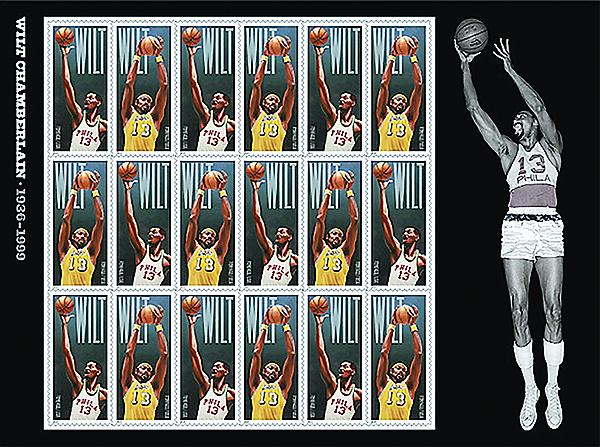 The stamps will debut during a 7 p.m. Philadelphia 76ers/Oklahoma City Thunder game at the Wells Fargo Center in Philadelphia, Pa.

The Postal Service will offer a limited number of single tickets to collectors who wish to attend the event. Collectors should e-mail NationalEvents@usps.gov before Nov. 24 at 2 p.m. There is a limit of one ticket per e-mail request, and tickets are not transferable after being confirmed.

Tickets to the game are also available for sale to the general public on the team’s website Sixers.com.

The extra-tall Wilt Chamberlain commemorative stamps each measure a little more than 2 inches tall. Artist Kadir Nelson created the two illustrations for the stamps. One stamp shows Chamberlain in a Philadelphia Warriors uniform, and the other shows him wearing an L.A. Lakers uniform. USPS art director Antonio Alcala designed the stamps and the pane.

The stamps will be sold in a pane of 18 with selvage on the left side reading “Wilt Chamberlain • 1936-1999.” On the right side of the pane, there is a black-and-white photograph, taken by Ken Regan, of Chamberlain leaping.

“The 7-foot-1-inch center dominated the NBA for more than a decade, setting a plethora of individual records,” according to the Postal Service. “As a pro, he led his teams to two NBA championships, and in 1962 he scored an NBA record 100 points in a single game.”

Chamberlain was born Aug. 21, 1936, in Philadelphia. While attending Overbrook High School, he played on the basketball team for three years. He was 6-foot 11-inch at the time.

During his high school playing years, he scored more than 2,200 points and was nicknamed “Wilt the Stilt” by a reporter. Chamberlain wasn’t a fan of the nickname.

He attended college at the University of Kansas and played for the Jayhawks beginning in 1956. In 1957, his team made it to the NCAA finals.

After college, in 1958, Chamberlain spent a year as a member of the Harlem Globetrotters basketball team.

In 1959, he started his NBA career with the Philadelphia Warriors. He was named NBA rookie of the year and most valuable player.

In 1962, Chamberlain became the first NBA player to score 100 points in a game, a record that still holds to this date. He also holds the record for most points scored in one season, 4,029 in 1961-62. His career with the Warriors continued after the team moved to San Francisco in 1962.

He returned to Philadelphia in 1965 to play for the 76ers. During his time with the 76ers, they won the NBA championship in 1967.

In 1968, Chamberlain was traded to the Los Angeles Lakers, and in 1972, the team won the NBA championship. Chamberlain retired in 1973.

Technical details for the Wilt Chamberlain forever stamps appear below.

Standard ordering instructions apply. Collectors requesting first-day cancels are encouraged to purchase their own stamps and affix them to envelopes. The first-day cover envelopes should be addressed for return (a removable label may be used), and mailed in a larger envelope addressed to Wilt Chamberlain Stamps, Retail Manager, Philadelphia Metropolitan District, 3190 S. 70th St., Philadelphia, PA 19153-3244. Requests for first-day cancels must be postmarked by Feb. 3.

The Postal Service’s set of two uncacheted first-day covers for the Wilt Chamberlain forever stamps is item No. 472416 at $1.86.