World’s most valuable stamp will be exhibited in Washington 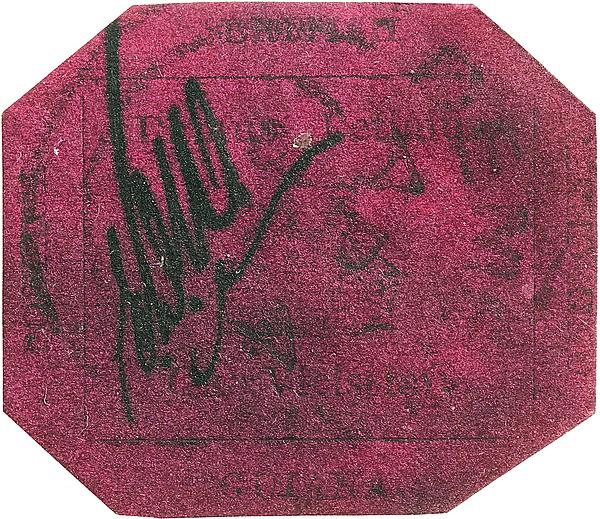 The 1856 British Guiana 1¢ Magenta, the most valuable stamp in the world, will be displayed at the National Postal Museum in Washington beginning in April 2015.

The famed 1856 British Guiana 1¢ Magenta — long regarded as the world’s most valuable stamp — will be displayed at the National Postal Museum for three years.

Museum Director Allen Kane made the surprise announcement Nov. 6 at the start of a ceremony for four Christmas stamps.

Kane said his Washington museum had arranged for a “long-term loan” of the stamp, which sold for $9.5 million in June at a New York auction.

The stamp, which has rarely been displayed in public, will go on view at the museum in April, the museum said.

It will be the longest and “most publicly accessible showing ever” of the stamp, according the museum.

The new owner of the fabled stamp is unknown, insisting on remaining anonymous when the 1¢ Magenta was sold by Sotheby’s New York.

A spokesman for the postal museum said it, too, is in the dark over who is the actual owner.

“The owner of the stamp is completely anonymous to us,” said museum spokesman Marshall Emery.

“You’re not going to find anything rarer than this,” Kane told a British newspaper shortly before the latest sale. “It’s a stamp the world of collectors has been dying to see for a long time.”

Now Kane will be able to add the stamp discovered by a 12-year-old Scottish lad in 1873 to the rare stamps that have been brought to the Capitol Hill museum.

“We love being able to showcase truly impressive objects for the world to see,” Kane said in a news release. “Everyone loves to see rare and extremely expensive things, and this stamp certainly fits the bill.”

Kane broke the news of the museum’s display when Postmaster General Patrick Donahoe and other U.S. Postal Service officials gathered in what he called “the greatest postal museum on the Earth” to launch a set of holiday stamps marking the 50th anniversary of the Rudolph the Red-Nosed Reindeer Christmas special.

Donahoe and his postal marketing director Nagisa Manabe were using the ceremony to highlight the Postal Service’s plans for holiday mailing season.

“This is our season to shine,” said Manabe, who oversees the USPS stamp program as well as its marketing efforts.

Donahoe announced that some post offices would begin delivering holiday parcels seven days a week as of Nov. 17 as part of his emphasis on packages as a key to the Postal Service’s future.

“Packages seven days a week and letters five days a week,” he said was his prescription for turning the financially ailing Postal Service around.

Letter mail has fallen sharply in recent years while packages continue to grow, fed by increasing levels of e-commerce, he said.

Manabe used a question-and-answer session after the stamp dedication ceremony to assure first-day collectors that she would attempt to give them advance notice of new stamps next year.

But she also said she still might want to withhold announcement of some stamps in an effort to gain more publicity for those issues.

Later, she told the first-day collectors she would continue to talk to them about their needs for information on upcoming stamps.

Donahoe also defended the agency’s stamp selection process from recent criticism that USPS is pushing stamps that have a large revenue potential and ignoring historical subjects.

The Citizens’ Stamp Advisory Committee is doing a good job of balancing requests for stamp subjects, Donahoe said, noting that one individual’s suggestion for a “pop culture” stamp might be another’s idea of a historical subject.

For additional information about the museum, visit online at www.postalmuseum.si.edu.