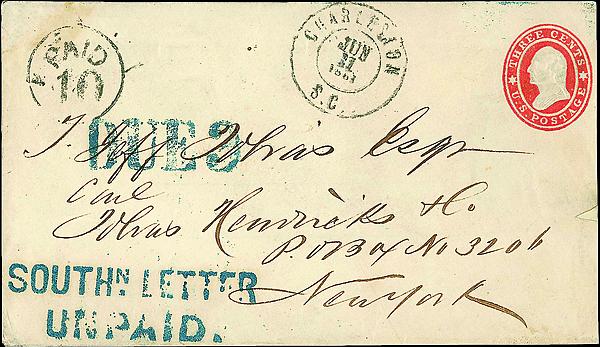 This 1861 3¢ stamped envelope mailed from Charleston, S.C., to New York City, is one of just two covers known from Charleston struck with the blue two-line “Southn. Letter Unpaid” handstamp. It is offered in Siegel’s auction of p 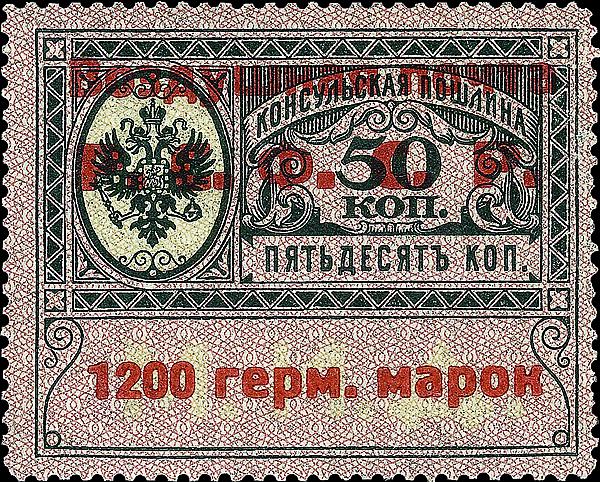 The key item in Russia’s 1922 air post Official set of eight stamps is the 1,200-mark-on-50-kopeck surcharged stamp. An unused example will be offered during the Nov. 18-19 auction by Siegel International.

Robert A. Siegel Auction Galleries of New York City will host four days of auction action from Nov. 18 to 21.

Siegel auctioned the first part of the Brandon collection earlier this year on June 24; that sale was previewed in the June 23 Linn’s.

The Siegel International worldwide auction, in association with Charles F. Shreve, is neatly divided between issues of Great Britain and the Commonwealth, which begins the sale, the rest of the world, and collections and accumulations.

Among the Russian stamps on offer are a number of the 1922 air post Official stamps, which the Scott Classic Specialized Catalogue of Stamps and Covers 1840-1940 notes were used on mail from the Russian embassy in Berlin to Moscow. The issues are Russian consular fee stamps surcharged in German marks.

These lithographed stamps with a standard arms-in-oval design and detailed borders show a bicolor burelage and are surcharged in carmine, creating an appealing pastiche of pictorial, inscribed and overprinted elements.

For the eight stamps in the set, the 2014 Scott Classic specialized catalog offers individual unused values that range from $175 to $3,000, with the exceptionof the 1,200-mark-on-50-kopeck stamp (Scott CO6), which rockets to a value listing of $43,000 (in italics, suggesting this issue trades infrequently).

It is believed that for this variety, only two panes of 25 stamps were issued, Siegel explains, describing the unused stamp with hinge remnant in the upcoming auction as having a very fine appearance and calling it “A highly collectable example of one of the key rarities from the Soviet Union.” It comes authenticated with a 2014 Buschbayew certificate noting unidentified handstamped markings on reverse and a crease at right. It is listed by Siegel with the Scott catalog value as its presale estimate.

The auction of the Brandon collection items offers a broad range of postal history, including Confederate patriotics, advertising covers, railroads and waterways, prisoners’ mail and more.

The “Southn. Letter Unpaid” handstamp was created by the Louisville postmaster in 1861 with the outbreak of the U.S. Civil War, to identify mail sent north from southern states that had seceded from the Union and therefore could no longer use U.S. postage. The marking rendered the postage invalid, and such letters were also marked postage due (“Due 3”).

Siegel notes that there are just 29 authentic “Southn. Letter Unpaid” covers recorded in the Special Routes book, and just two from Charleston, S.C.

Another appealing item in the collection is a Robert E. Lee autographed homemade field cover on brown paper addressed to Mrs. William H. Fitzhugh in Richmond, Va., which is offered with an estimate of $7,500 to $10,000.

Full details of these upcoming Siegel sales, including online bidding options, can be obtained at www.siegelauctions.com; or by writing to Robert A. Siegel Auction Galleries, 60 E. 56th Street, New York, NY 10022.