U.S. Stamp Notes: Advertising covers question if your car is ready for winter 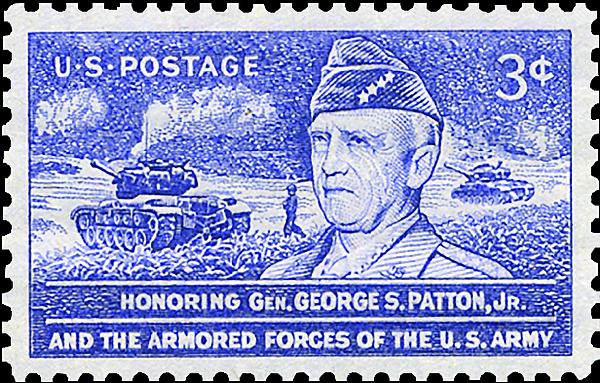 The cartoon caption contest stamp for November is this 1953 3¢ commemorative stamp picturing Gen. George Patton. There will be a winner for the best philatelic and nonphilatelic lines. Entries must be received by e-mail or at Linn’s 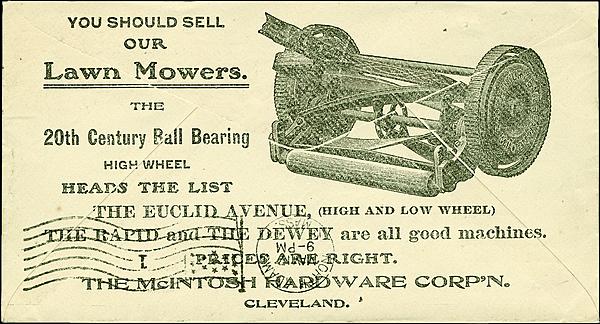 From the list of items mentioned on the front of this 1903 advertising cover, it seems to have been sent from a Cleveland, Ohio, sporting goods store. However, when the cover is turned over, it reveals that it 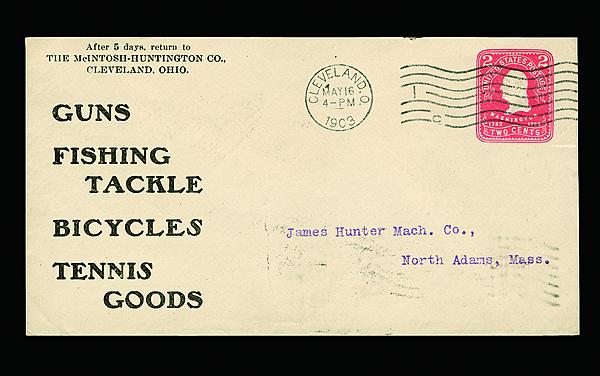 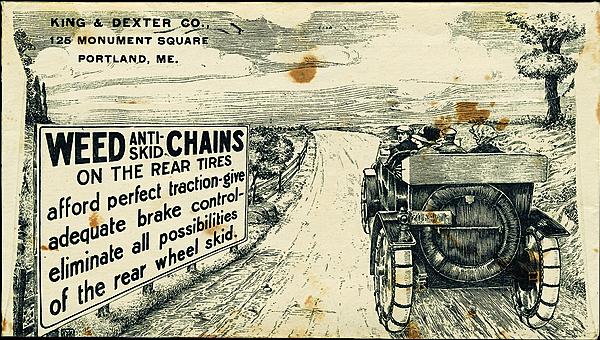 This 1915 advertising cover has some inconsistencies between the two images on each side of the envelope. 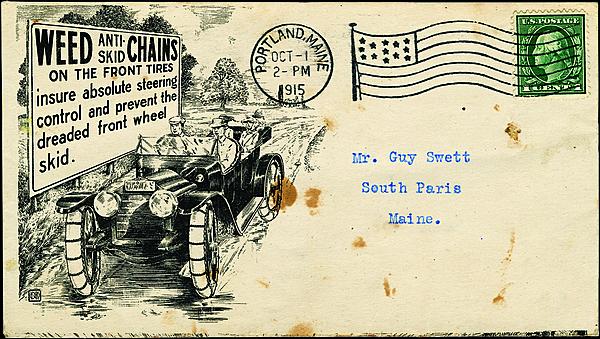 I wasn’t around in the early 1900s when companies used fancy advertising art on business envelopes to help sell their wares. It still happens today, but I don’t see it often.

Advertising envelopes were all the rage in the early years of the 20th century, and I enjoy visiting that era by way of the postal evidence that has survived. Two of my favorites are shown here.

It is no accident that these covers picture a car and lawn mower. Because every conceivable product is advertised in this era, it is prudent to limit one’s subjects, and those two subjects, plus covers related to death and dying, are what I actively seek.

I have a particular fondness for covers with advertising art on both the front and the back, such as the 1915 cover shown below.

On the front of the cover, the car is heading toward the viewer. On the back, it is moving away.

The car shown on both sides is the same, and the occupants look to be the same, based on their hats. However, the license plate numbers, the signs and foliage differ on the front and back.

The cover is canceled in Portland, Maine, Oct. 1, 1915, which would have been a good time of year to think about getting your automobile ready for winter weather.

The other cover is from the McIntosh-Huntington Co. of Cleveland. From the items listed on the front — guns, fishing tackle, bicycles and tennis goods — it appears to be a sporting goods store.

But turn the cover over and a “20th Century Ball Bearing, High Wheel” lawn mower is the featured item. So, it appears we are looking at advertising for a hardware business that, in this era, offered a wide range of goods.

These and similar advertising covers give us a window on the good old days. Today, we have cars that look very different and are much more reliable, and today we have lawn mowers that don’t have to be pushed.

Given the new bestselling book examining the manner of the death of Gen. George Patton (Killing Patton: The Strange Death of World War II’s Most Audacious General by Bill O’Reilly and Martin Dugard), and calling to mind his in-your-face method of running a military campaign as we contemplate strategy in the Middle East, this seems like a good time to use the 1953 3¢ General Patton commemorative as the cartoon caption contest stamp for November.

Patton presented the unvarnished truth as he saw it, with no consideration of political correctness or diplomacy. A brilliant leader in battle, he might not make it past major in a modern peacetime army. But, at the time, his shortcomings were understood and accepted as the price for utilizing his talents toward successfully ending World War II in Europe.

I want you to put on Patton’s larger-than-life personality, and his four stars, and tell me what you think he might say about today’s world, stamp collecting, the modern military, leadership or anything else that interests you.

Put your entry (or entries) on a postcard if possible and send it to me, John Hotchner, Cartoon Contest, care of Linn’s Editor, Box 29, Sidney, OH 45365, or e-mail it to jmhstamp@verizon.net. Be sure to include your mailing address.

For each winner, the prize will be the book Linn’s Stamp Identifier, published by Linn’s (a retail value of $12.99), or a 13-week subscription to Linn’s (a new subscription or an extension). To be considered for a prize, entries must reach Linn’s no later than Nov. 24.