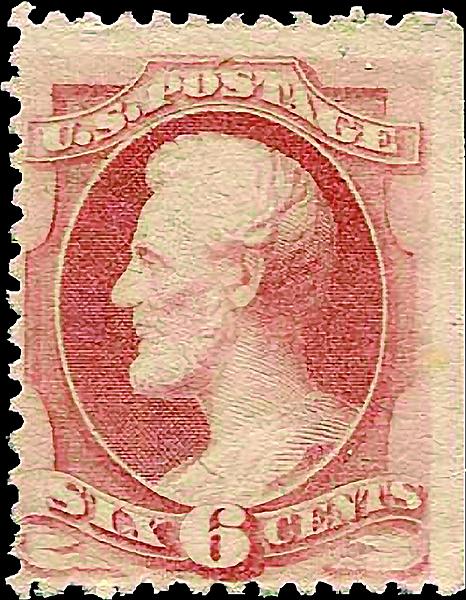 Regency-Superior’s auction at the APS Stampshow included an 1875 special printing of the 6¢ Lincoln on soft, porous paper, which sold for $40,460. 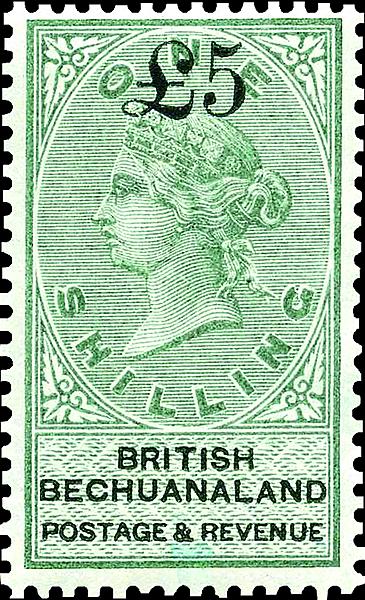 An unused 1918 £5 provisional issue of Bechuanaland Protectorate, sold by Harmer-Schau during its APS Stampshow auction for $92,000.

Not one but two major auctions took place during the American Philatelic Society’s annual Stampshow convention in Hartford, Conn., Aug. 20-23. Both sales were previewed in Linn’s Aug. 11 issue.

Presale viewing kept the staffs of Regency-Superior and Harmer-Schau busy during the show, and the results attested to robust interest in the material offered.

The Bechuanaland Protectorate was a southern African colony that is today the independent republic of Botswana. In 1918, presumably due to the war, delivery of £5 fiscal stamps to the colony was delayed, so 1-shilling Postage & Revenue stamps from neighboring British Bechuanaland (now a part of South Africa) were overprinted with the higher denomination.

Only four of these provisional stamps have survived: three unused and one used. Unlike other colonial postage stamps pressed into fiscal service, however, the word “Postage” was not obliterated, so the new £5 stamps remained technically valid for either use. In fact, the sole known used example bears a postal cancel, according to the auction firm (notwithstanding the note in the Scott Classic Specialized Catalog of Stamps and Covers 1840-1940 stating otherwise).

The stamp is listed under Bechuanaland Protectorate as Scott AR2; in the Stanley Gibbons catalog, it is F2. Both letter prefixes designate a revenue stamp that could sometimes be used for postal purposes. However, the auction firm argues that the stamp should properly be listed in the regular postage section of both catalogs.

One of the unused examples is now in the British Library and another, along with the sole used example, was bought by the government of Botswana at auction in 1981, making the example offered in the Harmer-Schau sale the lone one remaining in private hands.

Amazingly, it was discovered just recently when its owner purchased a “nondescript” British Africa collection and found the stamp, which is mint and never hinged, in a small envelope marked “$20.” Estimated at $15,000 to $25,000, it sold for $92,000, including the 15 percent buyer’s premium added by Harmer-Schau to all lots.

South Australia was one of six British colonies that joined to form modern Australia in 1901, although each state continued to use its own stamps for another dozen years.

Among United States items in the sale, a recently discovered Jan. 1 first-day cover of the 1893 2¢ Columbian commemorative (Scott 231) doubled its presale estimate to reach $23,000.

Since Jan. 1, 1893, was a Sunday and many post offices were closed, Jan. 2 is generally accepted as the first day of issue for the Columbian series. The auction firm notes that the cover in this sale is a new find and just the second recorded example.

The attention-grabber at the Regency-Superior sale in Hartford was a single example of the intentionally created upright Jenny Invert variety of the 2013 U.S. $2 stamp (variety of Scott 4806a) based on the classic 24¢ airmail error with the upside-down biplane.

Carefully removed from the pane of six, it sold for $14,875, including the 19 percent buyer’s premium Regency-Superior adds to all lots.

Among U.S. classics, an 1875 special printing of the 6¢ Lincoln on soft, porous paper (Scott 195) stood out as a tough-to-find stamp. Without gum as issued, this example, with a natural straight edge, sold for $40,460.