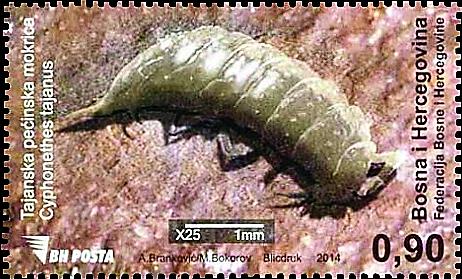 A recently discovered cave-dwelling wood louse is pictured on this stamp issued Sept. 10 by Bosnia-Herzegovina. 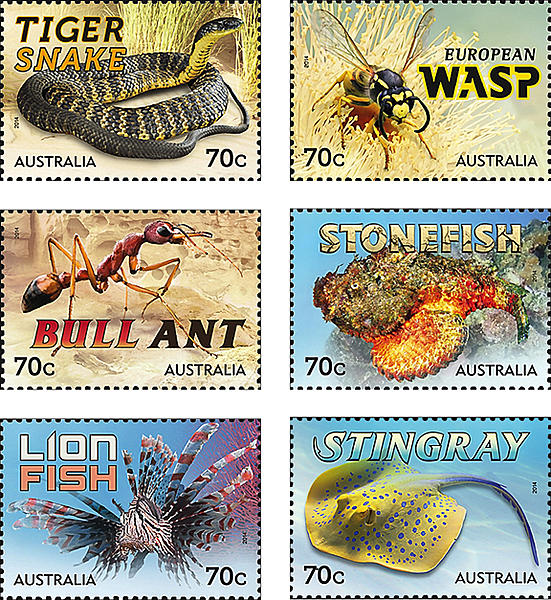 This year’s issue for the month is called “Things that Sting.”

The tiger snake (Notechis), which can grow up to 10 feet in length, is found in southern Australia, including the island of Tasmania.

The website of the Australian Museum says of the tiger snake: “The snake’s large size, often aggressive defence and toxic venom make it extremely dangerous to humans.

“Although generally shy and preferring escape over conflict, a cornered tiger snake will put on an impressive threat display by holding its forebody in a tense, loose curve with the head slightly raised and pointed at the offender. It will hiss loudly as it inflates and deflates its body, and if provoked further will lash out and bite forcefully.

“The venom of the tiger snake is strongly neurotoxic and coagulant, and anyone suspected of being bitten should seek medical attention immediately.”

The European wasp and the bull ant represent the insect world in the Things that Sting stamp set.

As its name suggests, the European wasp (Vespula germanica) is not native to Australia. It was first sighted in Tasmania in 1959 and came to the Australian mainland about two decades later.

Similar in size and appearance to a bee, the European wasp can sting repeatedly.

Australia has more than 90 species of bull ants. Not only can they sting, but these ants are large — about 1½ inches on average — and aggressive.

According to the Guinness World Records website, one species of bull ant (Myrmecia pyriformis) is the most dangerous ant in the world.

The website says: “In attack it uses its sting and jaws simultaneously. There have been at least three human fatalities since 1936, the latest a Victorian farmer in 1988.”

The easily camouflaged reef stonefish is one of the most venomous fish in the world.

Australia Post’s website promoting Stamp Collecting Month, http://thingsthatsting.com.au, says: “The dorsal fin spines can inject agonisingly painful and extremely toxic venom into the body. While a sting from a Stonefish has been known to be fatal, no deaths have been recorded in Australia since European settlement due to anti-venom being developed.”

The venomous fins of the lionfish can inflect extreme pain, nausea and difficulty in breathing in humans.

The blue-spotted fantail ray is among the smallest of the about 80 ray species. Not only does it have blue spots, it also has two blue stripes on its tail, which is where its barbed stingers are located.

Sharon Rodziewicz designed the stamps. The printing firm EGO printed them in a variety of formats, including sheets of 50, booklets of 10 and 20, and souvenir sheets with the six stamps se-tenant (side-by-side).

A stamp from Bosnia-Herzegovina shows a creature that looks like an insect but is actually a crustacean.

The creature is the Tajan cave wood louse (Cyphonethes tajanus), one of the most recently discovered of the thousands of species of wood lice.

As crustaceans, wood lice are related to lobsters, shrimp and crabs.

However, unlike these relatives, wood lice live on the land, though they prefer damp places.

For instance, the Tajan cave wood louse is only known to live in the caves of Tajan Nature Park.

Wood lice also are generally smaller than their crustacean relatives.

On the stamp, the image of the Tajan cave wood louse is shown magnified 25 times, according to the measurement scale shown below it.

Bosnia-Herzegovina issued this 90-marka stamp Sept. 10 in sheets of nine with a label. A. Brankovic and M. Bokorov designed the stamp.