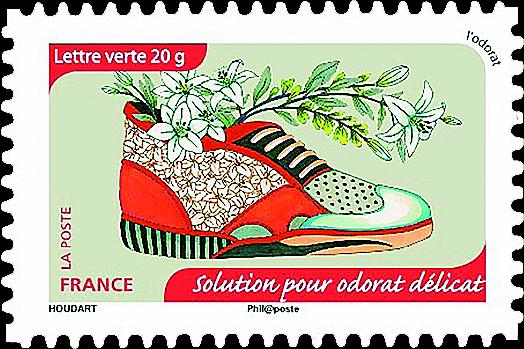 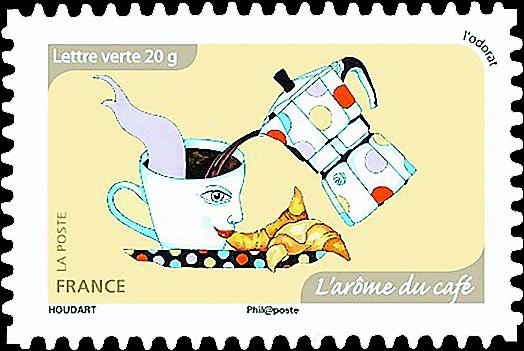 The illustration on this French booklet stamp evokes the smell of freshly made coffee. 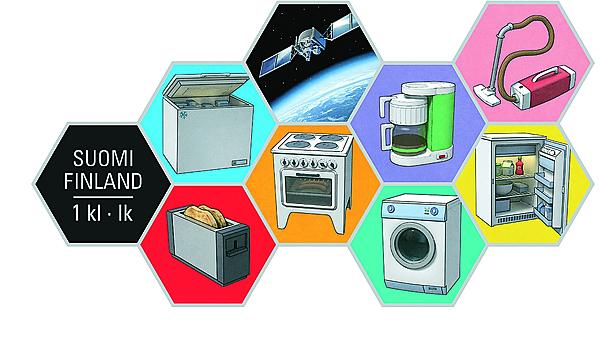 Seven household appliances and a satellite are shown in hexagons on this self-adhesive booklet stamp from Finland.

Nail polish, a slice of pizza and a coffeemaker are among the more than 50 everyday items pictured on new booklet stamps from Finland.

The booklet, issued Oct. 23, is called Changes in Everyday Finland and is part of a multiyear series leading up to the 100th anniversary of Finnish independence in 2017.

Each trend is further divided into eight hexagonal illustrations. A ninth hexagon on each stamp includes the country name, “Suomi-Finland,” and the first-class designation.

A close-up of the Domestic Appliances stamp is shown nearby.

In addition to the coffeemaker, the hexagons picture a toaster, freezer chest, satellite, oven with a stove top, washer, vacuum cleaner and small refrigerator.

The slice of pizza is shown on the Culinary Culture stamp in the center of the upper row on the pane, while the nail polish is part of the Pop Culture stamp below it. Aerosol cans of hairspray, a disco ball and a synthesizer also represent pop culture in the stamp’s design.

Compact discs are included twice in the Information Technology stamp at upper left: once with videotapes, and the second time with floppy disks.

Sami Saramaki designed the booklet stamps. Joh. Enschede of the Netherlands printed them by offset in a quantity of 200,000 booklets.

France’s La Poste calls this booklet L’odorat. All of the stamps are nondenominated, paying the green letter rate for items weighing up to 20 grams. Green letters are not carried by air, and arrive in two days.

Several good smells, including a rose, perfume and coffee, are represented on the stamp designs. Two croissants also are pictured on the stamp for coffee.

Other designs picture items that can stink, including fish, skunks and a tennis shoe. However, the shoe is filled with flowers, and the inscription on the stamp translates to “solution for delicate smell.”

Corinne Salvi designed the stamps, using the illustrations by Houdart.