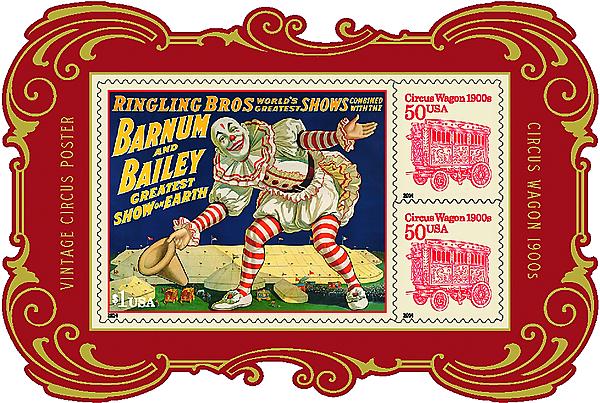 The $2 Circus souvenir sheet is available mint in the 2014 annual yearbook from the U.S. Postal Service that costs $64.95.

The United States Postal Service’s annual stamp yearbooks are a convenient, if somewhat pricey, means for obtaining most of the commemorative stamps issued in a given year.

Definitive (regular-issue) stamps are not included but may be purchased as a separate packet.

To protect the stamps, mounts are included in the yearbook. The mounts can be affixed to the yearbook pages to display the stamps.

Short, informative reviews of each issue and colorful pictures make the yearbook an entertaining gift for collectors and noncollectors alike.

For the 2014 yearbook, set to go on sale in December (pre-orders began in September), the Postal Service is including a special self-adhesive Circus souvenir sheet.

The USPS also will issue uncut Circus press sheets. The press sheet cost has not been announced.

Three stamps comprise the souvenir sheet: a $1 stamp with a design similar to the Barnum and Bailey Clown Poster forever stamp (Scott 4898), and two 50¢ stamps reprising the design of the 5¢ Circus Wagon coil of 1992 (2452).

If not for that $1 stamp, I probably wouldn’t have given the sheet much thought.

But the more I ruminated, the more annoyed I got.

To acquire the souvenir sheet, I could buy the yearbook, which is priced at $64.95. The price includes the face value of the stamps plus the cost of the mounts and the book.

That’s rather more than I care to shell out for an item with a total face value of $2.

Another option is to buy a souvenir sheet from a dealer, who will charge above face value to recover the initial cost and turn a reasonable profit.

Buying the souvenir sheet from a dealer won’t cost as much.

Given these circumstances, the only thing likely to be more scarce than the souvenir sheet itself will be associated postal history.

How pleased I would be to locate a cover franked with a Circus sheet paying postage to some exotic overseas destination.

Even a legitimate domestic use would be a cover worth saving.

Alas, finding such covers is not going to be easy, thanks to the limited-edition nature of the sheet.

Those words shouldn’t be part of the Postal Service’s stamp program.

If a stamp is approved for issue, it should be readily available to anyone for face value.

Some might argue that you will, in fact, pay face value for the Circus sheet and the other stamps included with the 2014 yearbook.

True enough, but the problem is not being able to buy the sheet separately. That’s a slap in the face to the stamp collectors who sustain the Postal Service’s stamp program.