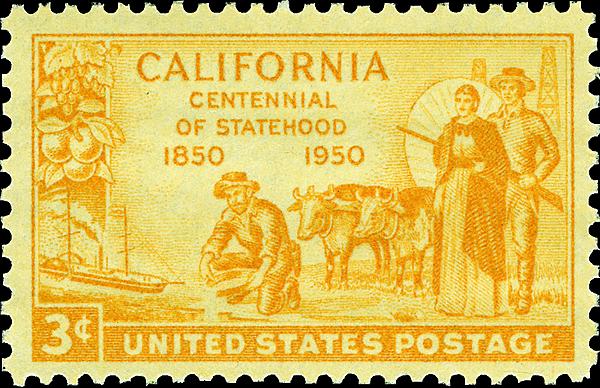 The 1950 3¢ California 100th Anniversary of Statehood commemorative stamp was issued in yellow in recognition of the role that the discovery of gold played in populating the state. 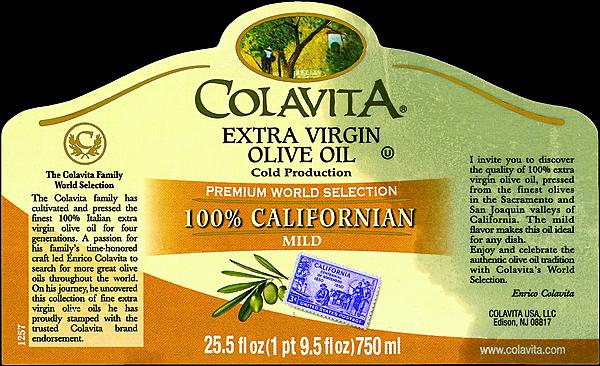 Notice something a bit off in the stamp chosen to draw attention to this label for extra virgin olive oil? 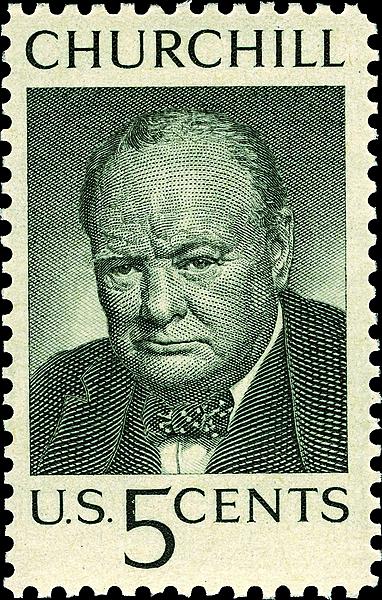 The United States issued a 5¢ stamp memorializing Churchill in 1965, within four months of his death. 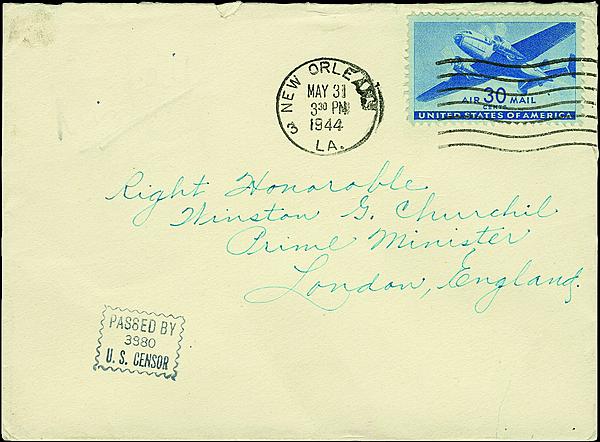 Sent from New Orleans in March 1944, this cover was censored in the United States and delivered to Prime Minister Winston Churchill in London, England, despite the lack of a street address.

One does not expect to see the name of an immortal such as Winston Leonard Spencer Churchill (1874-1965) as the addressee on a common piece of mail, so I was surprised to see the cover shown here courtesy of an American dealer in United States postal history, based in England.

The cover itself has two interesting features.

First is the U.S. civil censorship marking. There is no sender name on the cover, nor is there a sender’s address. One would expect to see that if the sender were military or the sending was some sort of official business.

Second is the lack of a street address, though it hardly would be needed on the delivery end.

The stamp dealer had other examples, and I wonder if a large number of Churchill-addressed covers were sold by the family at some point.

Churchill is one of the few foreigners to be honored on a U.S. stamp. The 5¢ stamp (Scott 1264) was issued May 13, 1965, less than four months after his death on Jan. 24, and was clearly intended to memorialize his life and contributions to freedom.

Churchill held a special place in American hearts, partially because he was Britain’s leader and an inspiration to all the Allies during World War II, but also because his mother was an American.

In recognition of his ties and his service, the U.S. Congress declared him an honorary American citizen in 1963, an honor accorded to only about a half dozen noncitizens.

The photo used as the basis for the stamp design was by Yousuf Karsh, and the story goes that he got the Churchill look in the photo by snatching away Churchill’s ever-present cigar just before snapping the photo.

It surely captures the determined Churchill of the war years.

If any publicity is good publicity, then I am pleased to see U.S. stamps being used in advertising. A recent example was sent in by reader Ronald Thurner of Santa Rosa, Calif., in the form of a label from a bottle of Colavita extra virgin olive oil.

Nothing is said about the stamp; it’s just there, in purple, drawing the eye to an olive branch that peeks out from behind the stamp.

The problem is that the 3¢ stamp as issued Sept. 9, 1950, is actually yellow, honoring the 100th anniversary of California statehood (Scott 997). It pictures a miner, pioneers and the SS Oregon.

Yellow was chosen because the miner is panning for gold, which played a significant role in bringing settlers west. Still, the color made it difficult for design details to be seen, and the choice received some criticism as a result.

Obviously, neither the stamp nor its color have much to do with olive oil, other than the fact that the weather in California’s Sacramento and San Joaquin valleys is well suited to olive tree cultivation.

Of course, a yellow stamp would not work very well with a yellow label, nor would the detail of a yellow stamp stand out to viewers. So the label artist exercised artistic license.