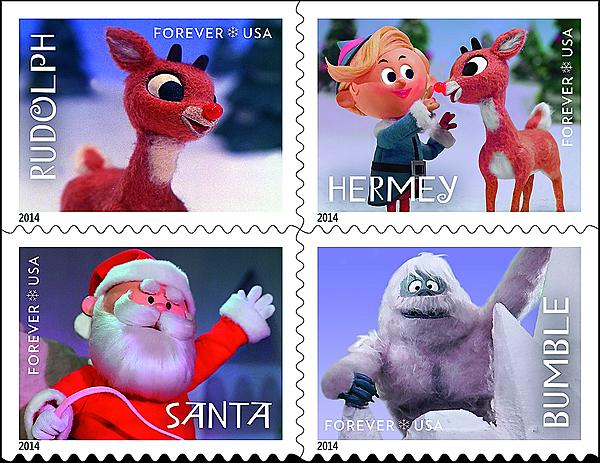 Scenes captured from the television production Rudolph the Red-Nosed Reindeer debut Nov. 6 on four United States stamps to be issued in Washington, D.C.

The stamps celebrate the 50th anniversary of the Rankin/Bass Christmas special, first aired Dec. 6, 1964, and rebroadcast every year since.

This stop-action animation production tells the story of “the most famous reindeer of all.”

The stamps will be issued in a double-sided pane of 20 (convertible booklet format).

The Postal Service said of the stop-action animation used to produce Rudolph the Red-Nosed Reindeer: “In this type of production, moveable models are photographed against backgrounds, giving the images their distinctive look.”

Rudolph is pictured on two of the stamps: on one by himself and on another with Hermey, the elf who would rather be a dentist than make toys.

The other two stamps show Santa Claus, and Bumble, the abominable snow monster.

Robert L. May introduced Rudoph in a poem written in 1939. His brother-in-law, Johnny Marks, set the story to music a decade later. Marks also composed the score for the television special, produced by Arthur Rankin Jr. and Jules Bass.

“The hour-long show went on to become not only the longest-running and highest-rated Christmas special in TV history, but also a beloved holiday tradition,” said the Postal Service about Rudolph the Red-Nosed Reindeer.

CCL Label printed 500 million of the Rudolph the Red-Nosed Reindeer forever stamps in double-sided panes of 20.

Each sheet segment consists of six panes arranged six across by one down and sells for the face value of $58.80.

A pictorial black-ink first-day cancel will be available for the stamps as well as a digital color first-day postmark.

Linn’s has also learned that a pictorial first-day-of-sale cancellation and event also are being planned for in Rudolph, Wis. Event details were unavailable as of press time. Details on how to obtain the postmark will be included in a future Postmark Pursuit column.

Technical details and first-day-cancel ordering information for the Rudolph the Red-Nosed Reindeer forever stamps can be found in the box below.

Collectors requesting first-day cancels are encouraged to purchase their own stamps and affix them to envelopes. The first-day cover envelopes should be addressed for return (a removable label may be used), and mailed in a larger envelope addressed to Rudolph the Red-Nosed Reindeer Stamps, Special Events, Box 92282, Washington, DC 20090-2282. Requests for first-day cancels must be postmarked by Jan. 5.
The Postal Service’s uncacheted set of four first-day covers for the Rudolph the Red-Nosed Reindeer stamps is USPS item No. 689616 at $3.72.