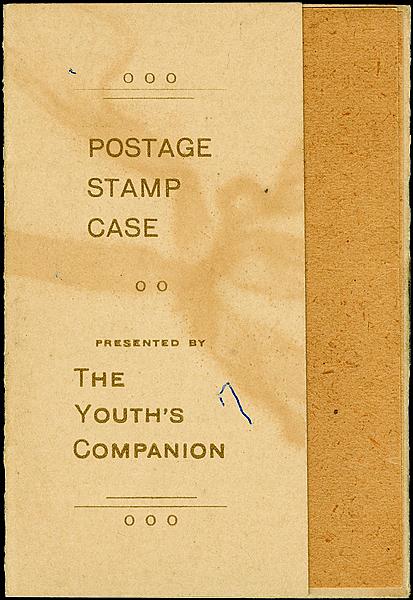 America’s history can be represented in small packages, such as this “Postage Stamp Case,” a folder given away in 1900 as publicity for the Youth’s Companion, then a family-oriented periodical. Beginning as a children&r 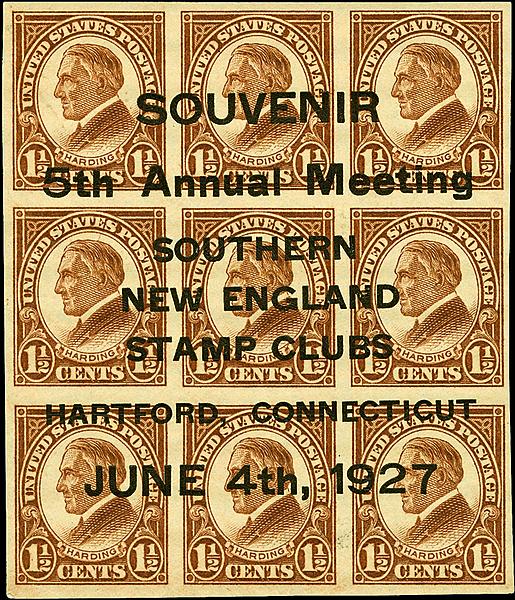 This block of nine 1925 Warren G. Harding imperforate stamps, with a total face value of 13½¢, served as a base for an overprint to mark a meeting of the Southern New England Stamp Clubs. 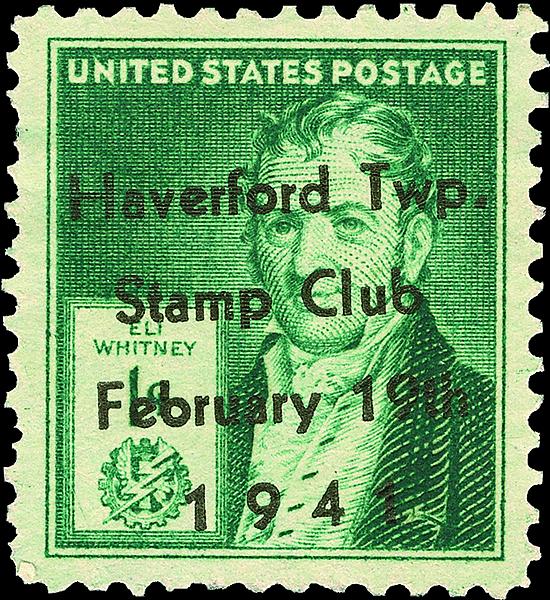 Part of the 1940 Famous Americans Inventors set, this 1¢ Eli Whitney stamp is overprinted for a Haverford Township (Pennsylvania) Stamp Club event of Feb. 19, 1941, perhaps a stamp show or dinner.

I collect and am a fan of United States overprints, not the few official productions in U.S. philatelic history, but the unofficial overprints that stamp clubs added to contemporary low-denomination stamps in the 1920s to 1940s. Apparently, the practice began to fade in the 1950s, and dropped off completely after that as first-class stamp rates increased.

I am pleased to present two examples that are new to me: one on the 1940 1¢ Eli Whitney stamp; the other on a 1½¢ Warren G. Harding block of nine imperforate stamps. The overprint on the Eli Whitney stamp was sent in by Linn’s reader Richard Pederson of Fredericksburg, Va.. Both of these club overprints were found at recent stamp shows.

The earlier of the two overprints is on the imperforate Harding stamps. It marks the June 4, 1927, meeting of the Southern New England Federation of Stamp Clubs.

The other overprint, created 14 years later, is a Feb. 19, 1941, souvenir of the Haverford Township (Pennsylvania) Stamp Club, likely for its annual stamp show or awards dinner.

Overprinting stamps would have had the same effect as canceling them: invalidation for future use as postage.

Today, the cost of stamps and the cost of printing might have killed the practice, but I sure would like to see it return.

Reader Carl Burnett of Melbourne, Fla., supplied the “Postage Stamp Case” shown full-size nearby. It was apparently a giveaway for a newspaper called the Youth’s Companion.

The reverse shows a drawing of a rather grand five-story office-type structure called “The Youth’s Companion Building” located at 201 Columbus Ave., Boston, Mass.

Beneath the illustration is this invitation: “You are cordially invited to visit The Companion and inspect the work of publishing the paper. A guide is in attendance.”

Inside the case is a sheet of wax paper with the instruction: “Postage Stamps will keep in good condition if placed with the gummed side next to the wax paper.”

Also included in the folder is this description: “The Youth’s Companion is an illustrated weekly family paper. It gives an extraordinary amount of bright and attractive reading from the best writers in America and Europe.”

The folder is from around 1900 as it includes a calendar for that year and contemporary postal rates.

An Internet search assisted with additional information about the Youth’s Companion. It was established in 1827 as a children’s magazine and had a 102-year run. Its early issues were centered on religion, to encourage “virtue and piety, and … warn against the ways of transgression.”

In the 1890s, it was recentered on entertainment and began to target adults as well as children. It merged with the American Boy in 1929.

The Youth’s Companion, which has been compared to the Reader’s Digest, published pieces contributed by important writers of the time, including Harriet Beecher Stowe, Mark Twain, Emily Dickinson, Booker T. Washington and Jack London.

On Sept. 8, 1892, the magazine published the first copy of the Pledge of Allegiance, written by staff member Francis Bellamy.

The Youth’s Companion Building in Boston still exists, and is on the National Register of Historic Places.