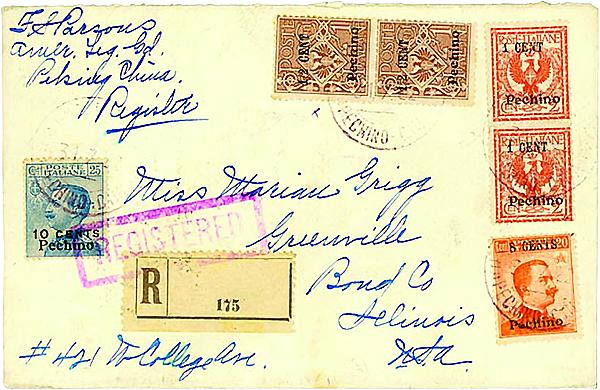 A 1922 cover sent from the American Legation in Peking through the Italian post office. Image courtesy of Daniel F. Kelleher Auctions. 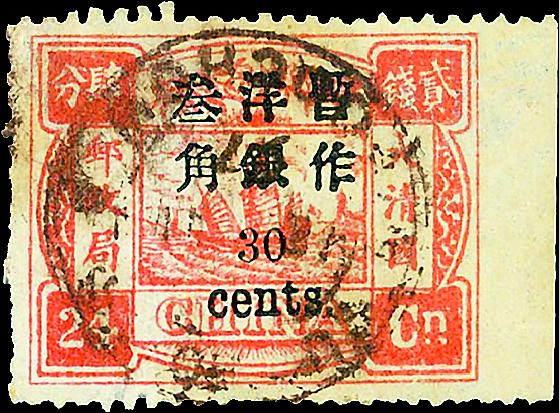 A little-known (and often unlisted) variety of the 1897 30¢-on-24-candareen with imperforate margin at right. Image courtesy of Daniel F. Kelleher Auctions. 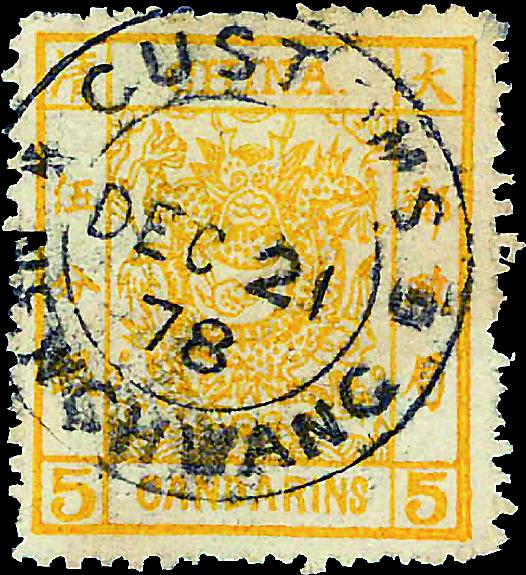 The 1878 postmarks on the Chinese Empire Large Dragons stamps can be difficult to find. Image courtesy of Daniel F. Kelleher Auctions.

There comes a time when a collector reaches out for a handbook to find a more fulsome explanation than he has at hand.

Over time, the Scott catalogs have developed from pricing guides to include considerable factual information.

China collectors of the pre-World War II issues find the Scott Classic Specialized Catalogue of Stamps and Covers 1840-1940 most helpful.

Packing the whole world into one volume means the Scott Classic specialized catalog cannot possibly be as specialized as a dedicated China handbook dealing solely with the same material.

Chan’s Colour-Illustrated Stamp Catalogue of China (1878-1949) is the only English-Chinese bilingual catalog I know of. A fascinating set of two volumes, Chan covers the most difficult stamps lucidly.

The China Stamp Society (based in the United States) published its Specialized Catalogue of China to 1949. It has gone through two editions since the 2012 release, and a third is being prepared.

In full color, it is a very comprehensive treatment of China, the provinces, Japanese occupations and Manchukuo, and Tibet.

The CSS catalog starts with a fine introduction, and a glossary of Chinese characters with English translations. This includes most common numbers, words and inscriptions used on stamps and postal history.

Values are fairly consistent with the market.

The complex 1942 domestic postage paid overprint illustrations are a marvel. Because each province used the same two characters, stroke and measurement distinctions determine location. The CSS catalog offers illustrations that highlight each of the variations.

A simple definition of a specialized collection is one that goes beyond a single example. A careful eye aids a China collector.

Inability to comprehend the meaning of Chinese characters is a hindrance, not paralysis. Guidebooks are readily available to assist the collector who doesn’t comprehend the Chinese language.

Blank album pages are the key. Place blank pages behind the relevant printed album page. The varieties, multiples and cancellations you’ll place on those pages will distinguish your collection from any other.

Postal history — the preservation and study of mailed envelopes and similar material — places stamps in their historical setting.

Online research of the sender and addressee often can help you write up covers with more flair.

Cancellations that are distinctive and pretty are fun to collect. The Chinese Empire 1878-83 Large Dragons stamps can be found with large customs cancellations according to city and date. Watch for the elusive 1878 postmarks.

Sharp-eyed collectors also find varieties that are new discoveries. When reported to catalog editors, such discoveries can result in a new listing in a specialized catalog.

Previously unknown, an 1885 Small Dragon 5-candareen rough perf 12½ (Scott 12, Chan 18) horizontal pair, showing a 3-millimeter imperforate margin at left, just sold at auction. Normal mint stamps catalog for $900, but this pair sold for $1,300. An imperforate margin is a straight edge that would be considered a fault in most other collecting areas — but not China.

Likewise for the 30¢-on-24-candareen small surcharge (Scott 37), used, with wide imperf margin at right. The specialized catalogs either don’t list or don’t price this rare variety.

It was sold to a sharp-eyed collector for $225 at a stamp show. The collector then placed it in a Hong Kong auction, where it realized U.S. $8,200.

Collecting postal history is a vast field. You can collect by a cover’s basic appeal, by the stamp franking, or by markings.

The 1922 cover shown on page 28, sent from the American Legation in Peking through the Italian post office and franked by various Italian Offices in China issues, would fit the bill.

Membership in the China Stamp Society brings a subscription to the celebrated China Clipper magazine and discounts on a fine array of CSS literature.