Curious 1921 Bulgarian stamp set worth acquiring for its story 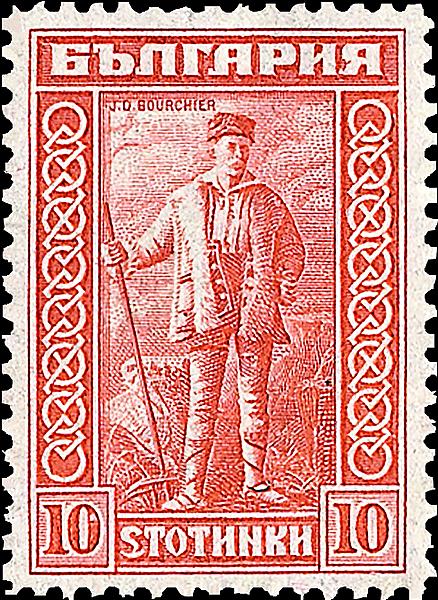 Journalist James D. Bourchier was honored by Bulgaria with nine stamps in 1921, this being the low value of the set. The reason for them is a curious tale.

Why did Bulgaria honor an Irish-born correspondent for a British newspaper with not just one but nine stamps (Scott 171-79) on Dec. 31, 1921?

The journey of James David Bourchier (1850-1920) from County Limerick to Sofia, Bulgaria, as Balkan correspondent for the London Times — and then a Bulgarian national hero and stamp subject — illustrates the cliche of truth being stranger than fiction.

Well-educated at Trinity College, Dublin, and then at King’s College, Cambridge, in classics and Latin and Greek, Bourchier became a teacher at Eton College, unhappy in his job.

He began writing for periodicals on the side and considered a new career in journalism. A fellow old Etonian who wrote for the London Times asked Bourchier in 1888 if he would go to Romania and Bulgaria, and report on the military and political situation.

At first Bourchier wrote as a freelance reporter, then as the Times’ Balkan correspondent from 1892 to 1915.

Bourchier did not report from a snug hotel room in the city, but learned Bulgarian and traveled all over the Balkan peninsula, including the most remote parts of Bulgaria, living with and coming to love the common people of the country.

Despite being profoundly hard of hearing, Bour­chier was gregarious, making friends and accumulating contacts easily, including several czars and kings of Bulgaria.

One amusing anecdote relates how passersby outside King Ferdinand’s palace walls in 1908 could hear the monarch “secretly briefing” Bourchier by bellowing into the journalist’s ear trumpet.

Bourchier made no pretense of objective, impartial reporting: He was always unabashedly sympathetic to Bulgaria and its people, and even acted as an official representative for the nation at several European political conferences.

Bourchier died in Sofia on Dec. 30, 1920, and King Boris III fulfilled his wish to be buried just outside the walls of Rila Monastery, in a remote mountain valley.

The people of his adopted country repaid his love and loyalty by crowding the cathedral in Sofia where he lay in state and where the funeral was conducted, and lining the route the procession took to the monastery. Bour­chier’s memory is still fresh: One of Sofia’s major roadways is James Bourchier Boulevard, and in 2012 a metro station was named after him.

The set of stamps issued for the one-year anniversary of Bourchier’s death were announced in summer 1921. The August 1921 Scott’s Monthly Journal reported that an order for an issue of 14 million stamps honoring Bourchier had been placed with “an English firm of engravers.”

The firm was Bradbury, Wilkinson & Co., which at the time engraved and printed stamps and banknotes for Bulgaria, among many other countries.

The two lowest values of the set (Scott 171-172, 10 stotinki and 20 stotinki) depict Bourchier dressed in typical Bulgarian clothing. Bradbury Wilkinson did not announce the sources of the designs, or the artists or engravers of its products, but the image on the Bourchier costume stamps is identical to photographs of him on various Internet sites.

The 30s, 50s and 1-lev values (Scott 173-175) show an oval portrait of Bourchier, probably also taken from a photograph, and the rest of the stamps in the set (176-179, denominated 1½l, 2l, 3l and 5l) show a view of Rila Monastery. The designs of the costume and portrait stamps include tiny lettering, “J.D. Bourchier,” and the monastery views say “Bourchier’s resting place.”

The Rila Monastery stamps were surcharged and reissued in October 1939 (Scott B13-B16) to raise funds for victims of a flood.

The Scott Classic Specialized Catalogue of Stamps and Covers 1840-1940 assigns negligible value to the Bourchier set: 25¢ each for most of the stamps, mint or used, and $3.35 for a mint full set, or $2.50 for a used full set.

The intriguing story behind these attractive engraved stamps is easily worth the pennies to acquire them.