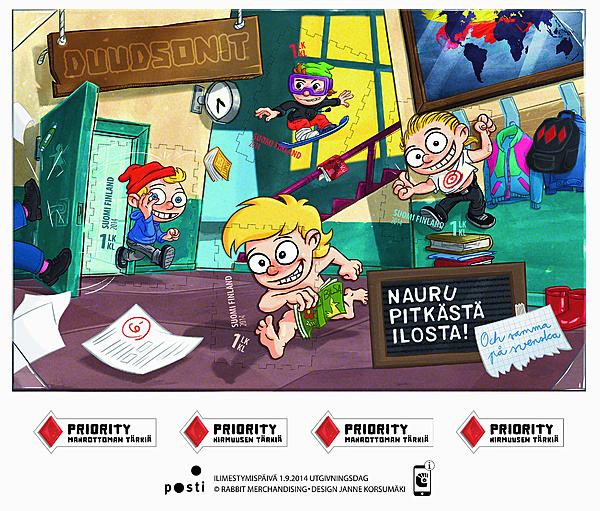 A limited edition of 3,000 of Finland’s the Dudesons pane includes intentionally created varieties in the stamp designs and selvage. 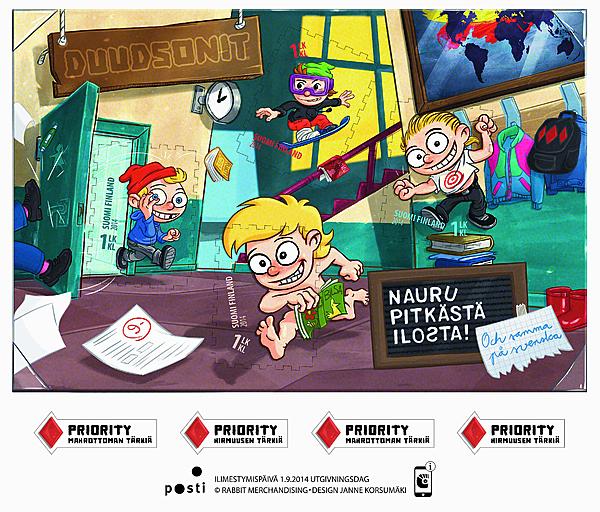 Finland issued a pane of four stamps Sept. 1 featuring cartoon versions of the stunt group the Dudesons as schoolchildren.

The right thumb of Jarno “Jarppi” Leppala is missing on the standard-issue stamp in Finland’s pane featuring the Dudesons and is present on the stamp with the intentionally created variety.

Like the United States Postal Service, Finland’s Itella Posti Oy has issued a limited edition of a stamp pane with intentionally created varieties.

Finland’s pane honors the Dudesons, a four-man stunt group with their own film and television series in Finland, the United States and other countries.

On Sept. 22, the announcement was made that 3,000 of the 303,000 panes contained five intentionally created varieties.

In this announcement, Itella Posti Oy product manager Tommi Kantola said that as many as five “pranks” were added on the special edition.

The announcement also described the design differences: “The special edition miniature pane includes, for instance, Jarppi’s right hand thumb in the stamp, which is missing in real life. Other errors can be found in the pane’s test number, time of day, the letter s and the color of the book covers.”

All of the stamp panes include messages on the reverse that relate to ananti-bullying campaign and a hidden CEE App (Chameleon Explorer) code that links to online content with a smart phone or tablet.