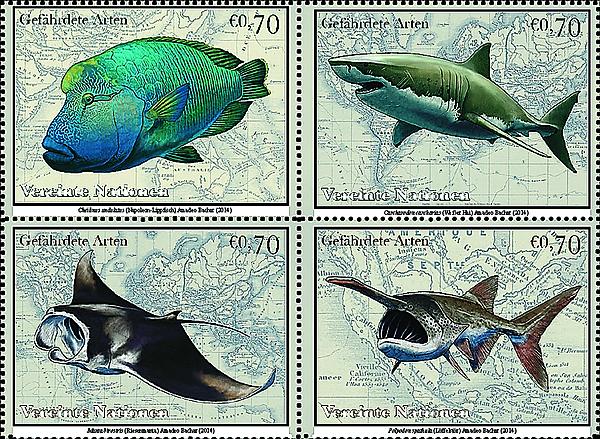 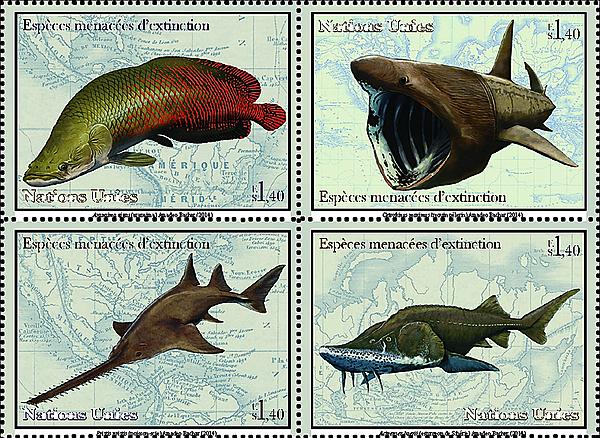 The four fish pictured on the U.N./Geneva Endangered Species stamps are the arapaima, basking shark, large-tooth sawfish and Siberian sturgeon. 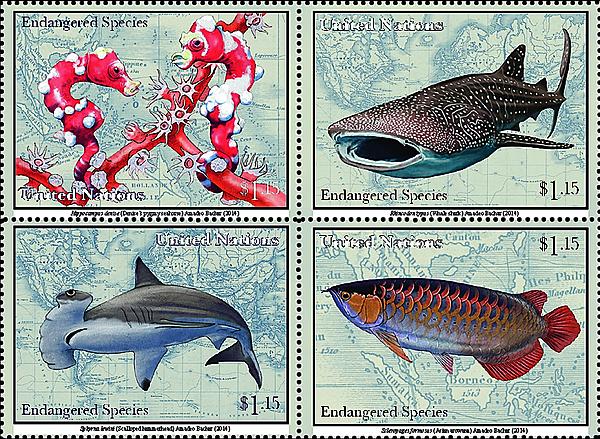 The first two stamps in the United Nations/New York Endangered Species set represent extremes in size from Denise’s pygmy sea horse, at less than an inch long, to the whale shark, at up to 40 feet long or longer. The other two $1.15 stamps show t

The UNPA’s Endangered Species series began March 3, 1993, as an effort to promote the protection of endangered species throughout the world. This is the 22nd set in the series.

The set includes four stamps for each of the three U.N. post offices at U.N. headquarters in New York City; the Palais des Nations in Geneva, Switzerland; and the Vienna International Center in Vienna, Austria.

The stamps are se-tenant (side-by-side) in panes of 16.

Amadeo Bachar, a freelance illustrator who specializes in fish, created the illustrations for the stamps. Each design shows a fish in the foreground and a map from a fishing chart in the background.

The first $1.15 stamp in the U.N./New York set shows Denise’s pygmy sea horse (Hippocampus denise). This tiny fish, only about 5/8 inch in length, is named for marine photographer and naturalist Denise Nielsen Tackett.

At the other end of the size spectrum, the whale shark (Rhincodon typus) is shown on the next stamp. The largest known fish, it can grow up to 40 feet or longer, about the size of a bus.

The second largest fish, the basking shark (Cetorhinus maximus), comes in at about 33 feet. One is shown on a 1.40-franc U.N./Geneva stamp.

The giant manta ray (Manta birostris) is equally large, growing up to 25 feet in length and weighing as much as 3,000 pounds.

Two large freshwater fish also are included in the set. South America’s arapaima gigas (Arapaima) is featured on a 1.40fr stamp, and the paddlefish (Polyodon spathula) is on a €0.70 stamp.

Arapaima gigas, which can grow as long as 10 feet, also can breathe air.

The paddlefish is named for its paddlelike snout. The scalloped hammerhead (Sphyrna lewini), shown on a $1.15 stamp, the large-tooth sawfish (Pristis pristis), on a 1.40fr stamp, and humphead wrasse (Cheilinus undulatus) on a €0.70 stamp also are named after distinguishing physical characteristics.

The remaining two stamps in the set feature freshwater fish: the Asian arowana (Scleropages formosus) on a $1.15 stamp, and the Siberian sturgeon (Acipenser baerii) on a 1.40fr denomination.

Each stamp measures 39.2 millimeters horizontally by 28.6mm vertically and is perforated gauge 12½ by 12¾.

The top and bottom borders of the panes are illustrated with silhouettes of different endangered species, a border design that is consistent throughout the Endangered Species series.

The corner illustrations change with each new stamp set to reflect the species highlighted on the stamp designs.

U.N. designer Rocco J. Callari created the pane concept for the stamps and the border illustrations.

Each pane also includes four marginal inscriptions: two in the left margin and two in the right. The inscription consists of the emblems of the United Nations and CITES, with the year “2014” between them.

CITES, the Convention on International Trade in Endangered Species of Wild Fauna and Flora, is an international treaty that aims to ensure that international trade in specimens of wild animals and plants does not threaten their survival.

In conjunction with the new stamps, the UNPA will offer first-day covers, silk FDCs and maximum cards.