A preliminary version of the presidential seal design (left) and the 37¢ stamp (right) as issued in 2005. For the final design, the seal was modified to remove the letters and open up the background. 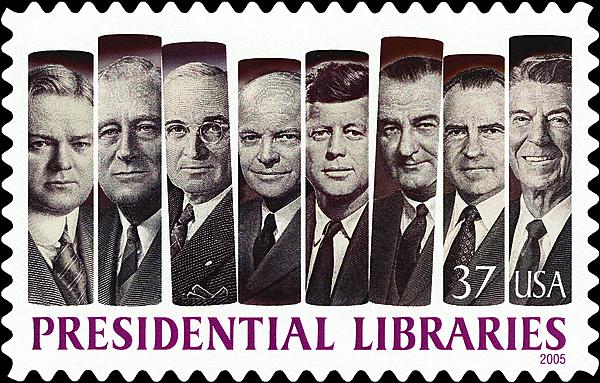 Paine’s initial idea for the design of the Presidential Libraries stamp was to show the deceased presidents whose libraries were part of the federal system in narrow vertical frames, suggestive of books on a shelf.

Paine loved the look of stamp sets. He served as art director for several United States sets, including the Celebrate the Century, Lighthouses, World War II, Flags of Our Nation and Legends of American Music stamps represented here by a single stamp from each set. 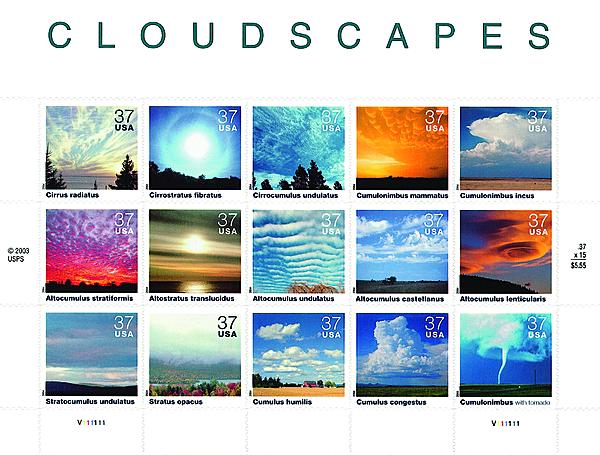 Editor’s Note: Howard E. Paine, who died Sept. 13 at age 85, was a United States Postal Service art director who oversaw the designing of more than 400 U.S. stamps. He discussed his work with George Amick in scores of conversations over the 23 years in which Amick researched and wrote the annual Linn’s U.S. Stamp Yearbooks.

Howard Paine had clear, consistent convictions about how stamps should look and convey their message. Our friendship, and my awareness of those convictions, date to 1981, after his retirement from the National Geographic Society and at the outset of his career with the USPS, when he took part in a forum I had organized for Stamp World magazine.

“What makes a good stamp design? Simplicity,” he told us. “The design has to be reproduced on a square inch of paper. You have to think small and design small: bold, clean, simple.”

He never abandoned that basic principle.

This simplicity can be seen in his designs for the 2004 pane of 15 stamps titled Cloudscapes.

He liked portraits, he said, “where the image is cropped right in on the head, not the head and shoulders,” a practice that “makes the most of the small space and has more impact.”

The good one depicts Robert F. Kennedy in profile (Scott 1770).

“You’re not looking at anything else, at how he’s dressed — just at the man, at his head, wondering, perhaps, what is going on in his head,” he said.

The others, cropped conventionally, were for John Steinbeck (Scott 1773) — “That big ear isn’t essential,” Paine said — and Martin Luther King Jr. (1771), with “a lot of small figures in the foreground. I can hardly make out what they’re doing. I’d love to see a King stamp with the face close in, like Bobby Kennedy’s, delivering an oration, perhaps, or just thinking.”

Paine would get exactly what he wanted in 1999, when a portrait of King, eyes raised to the heavens, was shown on a stamp in the Celebrate the Century series (Scott 3188a).

Ironically, that stamp wasn’t one of his; he and Carl Herr­man had split the art director chores for the 10 panes and 150 stamps of the series, and the pane for the 1960s, containing the King stamp, was Herr­man’s.

Howard told the forum he thought the USPS had “fallen back too often on tired symbols.”

He considered the Energy Conservation commemorative of 1974 (Scott 1547) “one of the worst ever.”

“The designer didn’t know what to say about energy, and so he played with the letters. Huge, bad letters. The word ‘Conservation’ is stuck in there, plus some drops and molecules of oil,” he said.

“How much more impact just a blazing, hot sun would have had!”

The International Women’s Year stamp (Scott 1571), also issued in 1975, “is the same — another globe, opened out in five blue gores; a dove of peace, a female symbol. The designers didn’t know where to stop. Or where to start. What a failure of imagination.”

He didn’t like to see a picture spread over two or more stamps, as USPS had done a few times. He called the 1981 Space Achievement block of eight (Scott 1912-1919) “a fisherman’s platter.”

“Each stamp works individually, but as a group it’s just kind of wild,” he said. “There’s a lot of hardware floating around. … It’s a case of trying to do too much — to show the whole history of the space effort instead of taking one clean, simple aspect of it.”

Looking ahead to his Postal Service career, Howard told the forum: “I’d like to try some adventurous things. I’d like to see some of the great caricaturists design stamps. (Broadway artist) Al Hirschfeld could do theater people.”

It took a while, but in 1991 Paine designed a five stamps honoring 20th-century American comedians with portraits created for USPS by Hirschfeld (Scott 2562-2566), and he turned to the artist again three years later for 10 Silent Screen Stars stamps (2819-2828).

In both issues, the denominations were on panels resembling torn ticket stubs, a device Howard invented for stamps with a show-biz angle.

A familiar Paine mantra was that “collectors love sets,” and he, too, loved the “set look.” He imparted that look to the Celebrate the Century stamps and such other classic series as Lighthouses; World War II; Flags of Our Nation; and Legends of American Music, which began with Elvis Presley and comprised 83 designs featuring big heads and close cropping.

He became a good friend and fan of many of the illustrators and typographers with whom he worked on these extended projects: Howard Koslow, Bill Bond, Tom Engeman, Burt Silverman and others.

When Howard tackled an assignment, he poured out his thoughts in page after handwritten page, often illustrated with quick pencil sketches, which he sent to researchers, artists, typographers and other co-workers.

Typical of his doggedness in getting a design right was the effort he put into the Presidential Libraries commemorative of 2005 (Scott 3930), a job that took nearly two years and resulted in a 5½-inch thick correspondence folder in his files.

His original idea for the stamp illustration was a row of books on a shelf, each spine bearing the portrait of a president who had an official library in the federal system, so tightly cropped that the president appeared to be peering out through a partly open doorway.

The artwork he developed with typographer John Boyd showed six deceased chief executives, Herbert Hoover through Lyndon B. Johnson, but it became necessary to squeeze in two more after Congress added Richard Nixon’s library to the system and Ronald Reagan died.

Smitten with the concept, he stuck with it for more than a year, until, as he told me, the decision-makers “decided that this wasn’t working and I should come up with something else.”

With Boyd and other artists, Howard developed at least six alternative designs, but none satisfied him or the Postal Service. Then he remembered seeing a White House invitation bearing the presidential seal, embossed on heavy cream stationery. It had gravitas, it symbolized the presidency, and “it made you feel important just to hold it,” he said.

He created a simplified version of the seal, and underneath it placed the words “Presidential Libraries” in large, flowing script by calligrapher Julian Waters, with whom he had worked on the Legends of American Music series.

His instructions to Waters reflected the preciseness of his thinking. “I’d like it to be a bit heavier, more masculine, than the Bill of Rights stamp you did some time ago,” he wrote.

“Perhaps with fewer flourishes. … The libraries are a businesslike archive of the workings of one administration. That’s why I’m asking for a certain amount of boldness.”

Waters sent him a preliminary sketch, which Howard found “bold and lively, but perhaps too italicized, too racy. I love the initials and the swashes. I just wish it stood up a bit more vertical … to ‘own’ the space, in competition with that powerful seal.”

He was pleased with the finished design, but had to compromise on printing and color. He had wanted the image to be engraved, but cost concerns forced him to settle for offset lithography, which knocked out the metallic gold ink he had hoped for because in offset it wouldn’t hold the fine lines of the seal.

The printer tried a simulated gold ink, which “turned out to look like olive drab,” Howard said. In the end, the stamp was printed in reflex blue, PMS red and ivory.

Those unfulfilled production preferences reflected some old-fashioned stamp biases on Howard’s part that went beyond design.

“I happen to like large stamps, intaglio printed stamps, single-color stamps,” he told the forum. “I like old-fashioned, engraved, documentary looking stamps that look as if maybe they are worth 18 or 20 cents” — which, at the time, were the expiring and incoming first-class rates.

Stamps of that description were rare then and have all but vanished now. Still, Howard Paine’s words are likely to prompt many a veteran collector to smile nostalgically and murmur “amen.”