Invalid postage on domestic U.S. mail from 1954 to the present 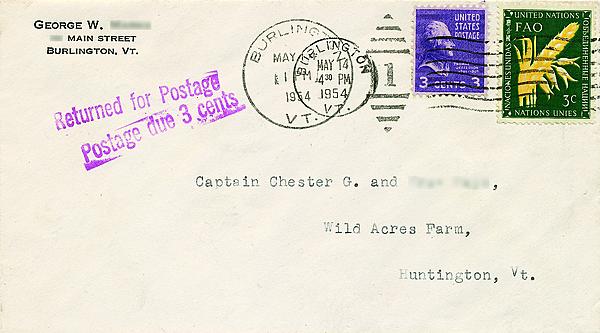 This May 11, 1954, letter mailed at Burlington, Vt., was first franked at the 3¢ domestic surface letter rate with a 3¢ United Nations stamp. A postal worker in Vermont considered the letter unpaid and unmailable, and marked it “Returne

I recently was asked whether, in 2000, special delivery stamps were valid as postage on Express Mail.

It’s important to note that by the year 2000, and in fact as of June 7, 1997 (according to the United States Postal Service’s Postal Bulletin 21946 for May 22, 1997), special delivery service was discontinued because Express Mail service had totally replaced it.

So the question is really, in the year 2000 could special delivery stamps that a person still had on hand be used as postage on an Express Mail item? Were such stamps valid as postage?

Let’s look at the history of valid postage. I am unable to locate any statement before 1954 that addresses the validity of postage use of special delivery stamps. Only with the Postal Manual Post Office Services Circular 1 of Oct. 18, 1954, Section 141.6, do we find:

“a. Mutilated or defaced stamps;

“f. Stamps of other countries.”

Finally, at some point between the Domestic Mail Manual issue 4 of Oct. 1, 1980, and the DMM issue 20 of Nov. 14, 1985, stamps overprinted with an unauthorized design, message, or other marking were declared equally invalid.

From that date until the present, the list of invalid postage stamps has remained unchanged.

Therefore, from Oct. 18, 1954, until the present, any use of special delivery stamps as postage was invalid.

I cannot illustrate any invalid use of special delivery stamps as postage; however, I can show an attempt to use a United Nations stamp outside of New York City that was caught, and the letter was returned to the writer for postage due.

Unfortunately, this example is dated May 11, 1954, a date that predates any official statement that I am able to find about the validity of such a use.

As far as the postal worker in Vermont was concerned, the letter was unpaid, unmailable, and marked “Returned for Postage” and “Postage due 3 cents.”

The writer paid the correct postage with the 3¢ Thomas Jefferson Presidential stamp, and the letter was correctly remailed to the addressee on May 14.