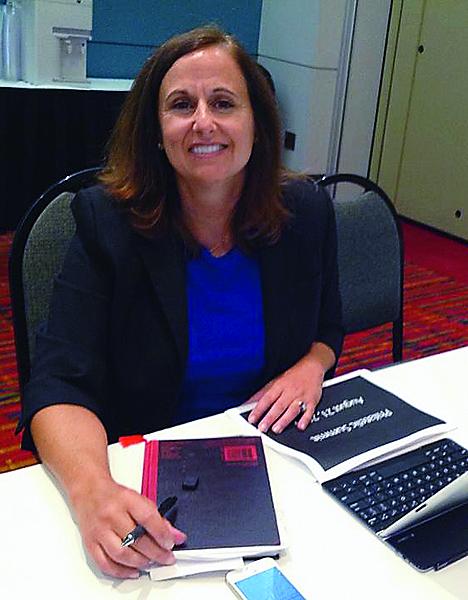 Susan McGowan, former director of Stamp Services for the United States Postal Service, during a meeting in August with philatelic journalists at the American Philatelic Society Stampshow.

Susan McGowan, a public relations executive who was named head of the United States Postal Service’s stamp program in December 2012, has been replaced, a USPS spokesman confirmed Oct. 8.

Spokesman Mark Saunders said McGowan was “not ousted” from her stamp position, but had been detailed to another position in the marketing department.

There has been considerable turmoil within the Stamp Services office, which controls the stamp program, according to several current and former postal employees.

The office also has come under fire from stamp collectors, especially first-day cover collectors, for the slow release of information about upcoming new stamp issues.

During McGowan’s tenure the stamp program has taken several new marketing steps, including the manufacture and selling of a stamp with a deliberate scarce variety.

Last year the agency issued a $2 version of the famous 1918 Jenny Invert airmail error stamp, which shows the airplane flying upside down. In addition to the upside-down examples, the Postal Service printed 100 panes of six of the $2 stamp with the Jenny aircraft flying right-side up — perhaps the first time that the agency deliberately created a stamp rarity.

McGowan also served as head of corporate licensing when she was moved from USPS public relations into the stamp position.

Those changes came shortly after the stamp program was moved from the administration of USPS Government Relations and placed under the control of Nagisa Manabe, the agency’s chief marketing officer.

McGowan replaced Stephen Kearney, a senior career Postal Service executive who had headed the stamp program for two years when he was removed.

According to an e-mail welcoming McGowan to the marketing department, she will be joining a sales operations and planning team. She will be working on tradeshows, communications and other issues, the message said.

McGowan joined the Postal Service in 2011. She worked previously at Avis Budget Group, Wyndham Worldwide, Toshiba Consumer Electronics, and Nutrisystem. She holds a master’s degree in corporate and organizational communication from Fairleigh Dickinson University and a bachelor’s degree in marketing from Rutgers University.