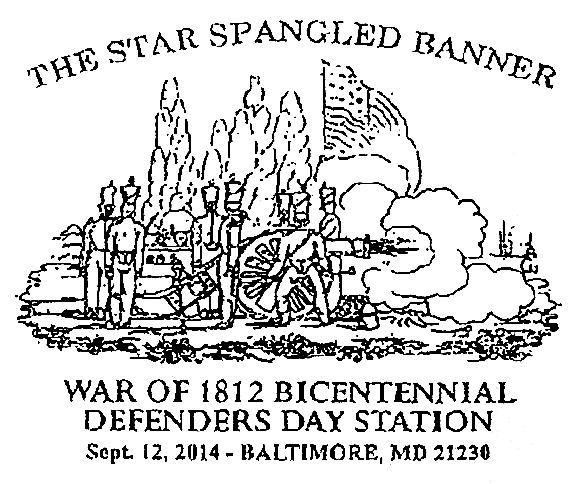 One of seven different postmarks offered in September in Baltimore to commemorate the bicentennial of the Battle of Baltimore, Fort McHenry and the national anthem.

Collectors of War of 1812 postmarks will have plenty to pursue with the latest group of postmarks offered by the Baltimore, Md., post office.

Seven different pictorial postmark designs commemorate themes associated with the 200th anniversary of the Battle of Baltimore at Fort McHenry and North Point, and The Star-Spangled Banner, which Francis Scott Key wrote after witnessing the bombardment of the fort.

Shown here is one of the postmarks, complementing the new United States War of 1812: Fort McHenry commemorative forever stamp issued Sept. 13 in Baltimore.

Each postmark is detailed below with the station name and description of the design.

To obtain any or all of these pictorial postmarks — all of which have a 60-day extension — use the designated station name and be very specific when identifying which postmark you are requesting.

Then send requests to the following address:

— Fort McHenry Bicentennial Station, Sept. 13-14; Francis Scott Key in a shield with an American flag, text “O’er the Land of the Free and the Home of the Brave.”