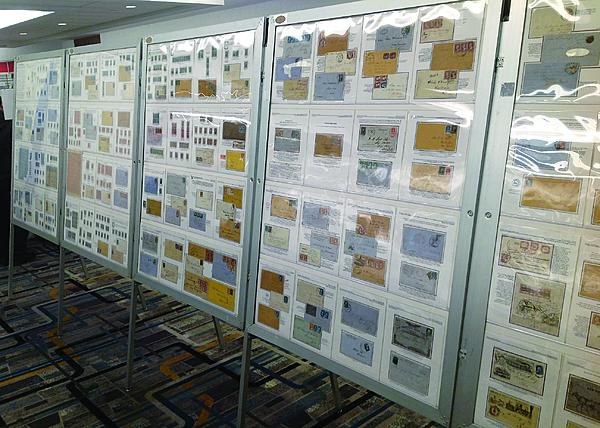 More than 230 frames of exhibits were displayed during the stamp show. The exhibits were judged using international standards to help exhibitors prepare for World Stamp Show-NY 2016. 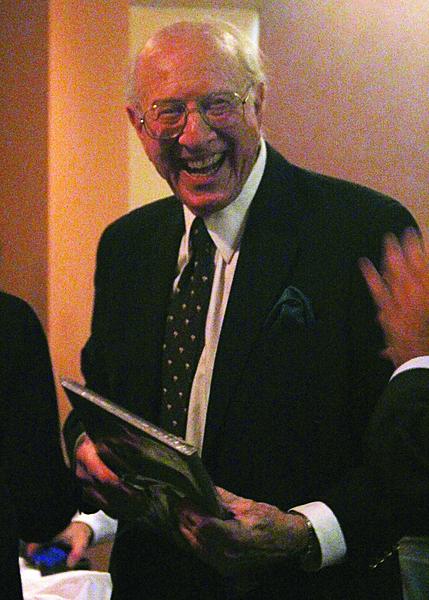 Stamp dealer Richard Champagne was named the ASDA man of the year during the Saturday evening awards dinner at the New York show. 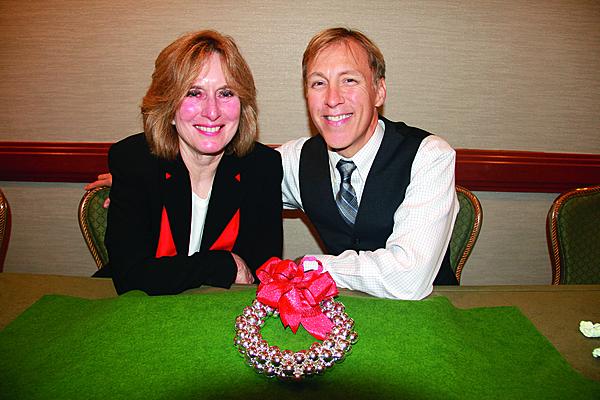 Photographer Sally Andersen-Bruce and wreath constructor Michael Owens pose with the actual wreath that was photographed for use on the new U.S. Silver Bells global forever stamp issued at the stamp show. 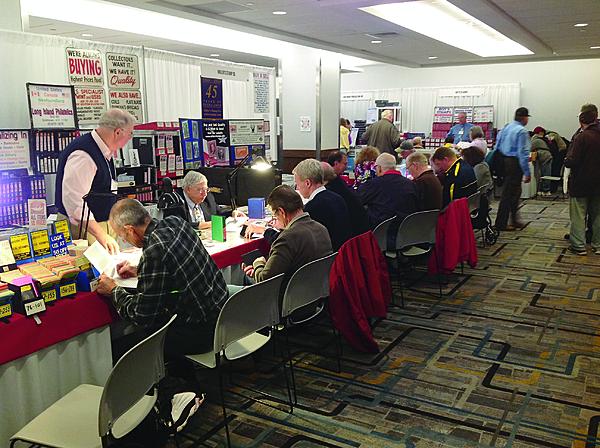 The busy show floor on the first day, Oct. 23, of the National Postage Stamp Show celebrating the 100th anniversary of the American Stamp Dealers Association.

A new show venue afforded more room for attendees and made it possible to position the United States Postal Service retail areas, the dealer tables and the exhibits all in the same room.

Public auctions by the Daniel F. Kelleher firm took place in a separate room just a few steps away.

Attendance was brisk for the opening of the show, with more than 900 people on the first day. The total show attendance was approximately 2,000, according to Van Siegling, ASDA interim executive director.

Pulling in crowds on the opening day were ceremonies held by the U.S. Postal Service for its Winter Fun forever stamps and Silver Bells global forever stamp.

The United Nations Postal Administration also had ceremonies for its Endangered Species stamps and its ASDA personalized pane of stamps for the association’s centennial.

Both postal administrations also held raffles by handing out tickets to those at the events. Recent products were given as prizes. Approximately 200 people attended each ceremony.

A CBS news reporter present at the show interviewed dealers and collectors, resulting in a report focused on the ASDA centennial titled “In digital age, stamp collecting still makes its mark.”

The video and article can be found on the CBS website at www.cbsnews.com/news/centennial-stamp-show-breaks-down-stereotypes.

Stamp dealer Richard Champagne was named the ASDA man of the year during a dinner held Saturday evening.

The ASDA also presented exhibit awards at the Saturday dinner.

The exhibits met the criteria of an international philatelic exhibition, consisting of 234 frames of national and international gold medal exhibits. The exhibits were judged by International Federation of Philately standards to help exhibitors prepare for World Stamp Show-NY 2016, to be held in New York City.

One notable rarity on display was the 1852 Dawson cover, the only cover bearing an example of the 2¢ Hawaiian Missionary stamp and the only cover franked with two different denominations of Hawaiian Missionary stamps. Addressed to Miss Eliza A. Dawson in New York, the cover was auctioned by Robert A. Siegel Auction Galleries in 2013 for $2,242,500.

The winning exhibitors at the National Postage Stamp Show were:

Robert B. Pildes for “Artist Drawings, Essays, Proofs and Associated Material of the 1948 Do’ar Ivri Issue of Israel,” grand award for international material;

Jeffrey Forster for “The U.S. 1869 Pictorial Issue Used in International Mails,” best-in-show for postal history exhibits; and Murray A. Abramson for “Expansion of U.S. Airmail to Foreign Destinations (1924-1941),” best-in-show for 20th-century material.

For additional information about the American Stamp Dealers Association, visit the website americanstampdealer.com.