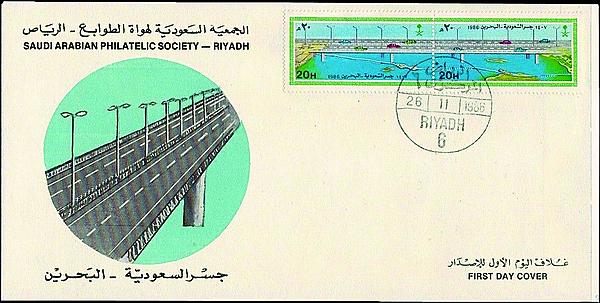 A pair of Saudi Arabia stamps marked the opening of the King Fahd Causeway.

Saudi Arabia issued two stamps Nov. 26, 1986, to celebrate the inauguration of the King Fahd Causeway, a chain of bridges and causeways linking Saudi Arabia and the island of Bahrain.

The two stamps are se-tenant (side-by-side). They are listed in the 2015 Scott Standard Postage Stamp Catalogue as Scott 1039 for the pair and 1039a-1039b for singles.

Both stamps have the same face value of 20 halalas. As of 1976, 100 halalas are equivalent to one Saudi rial.

The multicolor rectangular stamps were designed by the Directorate General of Posts and printed by offset at the Government Security Printing Press, Riyadh, on white unwatermarked paper in sheets of 50 stamps (25 se-tenant pairs) plus two labels.

The two stamps are perforated gauge 14. The printing quantity was 800,000 pairs.

In a continuous design, the pair pictures the bridge connecting Bahrain on the right stamp to Saudi Arabia on the left stamp. Traffic is shown traveling in both directions on the four-lane bridge. Streetlights also are pictured.

An aerial view of the causeway is shown below the bridge on both stamps.

In addition, the Bahrain side of the pair shows a partial map of the country with more vegetation and land features than on the Saudi side. The Saudi side has more water.

On both stamps, the denomination and currency are expressed in Arabic at top left and in English at bottom left.

The date of 1986 is in English, while the rest of the inscription is in Arabic.

Saudi Arabia’s national emblem, a palm tree above two crossed swords, appears in the top right corner of each stamp.

Various first-day covers exist. In the FDC shown here, the round image on the left side depicts a section of the bridge.

The Arabic text “Saudi-Bahrain Bridge” is inscribed below the image with “Saudi Arabian Philatelic Society-Riyadh” in Arabic and English above it.

The words “First Day Cover” appear in both Arabic and English at bottom right on the cover.

In 1954, King Saud made an official visit to Bahrain. During the visit, he expressed the desire to build a bridge connecting the two nations. More than two decades later, on July 8, 1981, the agreement to build the causeway was signed.

Constructing the four-lane 16-mile long, 75-foot wide causeway required 12 million cubic feet of concrete and about 47,000 tons of reinforced steel. The total cost was about $800 million.

The causeway was officially opened to the public Nov. 26, 1986. King Fahd of Saudi Arabia and Sheikh Isa bin Salman Al Khalifa, the emir of Bahrain, attended the ceremony.

In 2010, it was estimated that more than 25,000 vehicles crossed the causeway each day. In the same year, a major expansion project at the cost of about $5.3 million was announced.

Saudi Arabia’s 1986 King Fahd Causeway stamps should be collected as an unsevered pair; otherwise, the design loses its beauty.

This se-tenant pair is an inexpensive way to add an attractive item to any stamp collection.