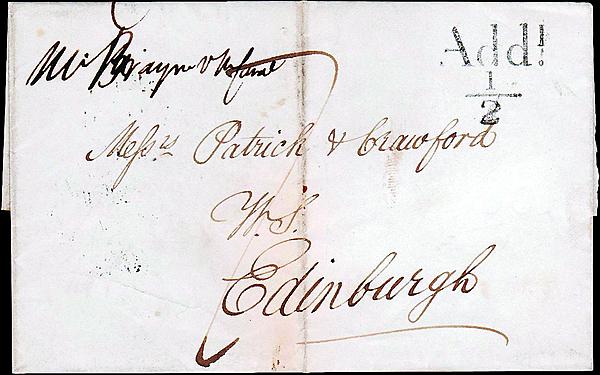 The additional halfpenny marking and the address to Edinburgh confirm this to be an example of the Scottish wheel tax surcharge. 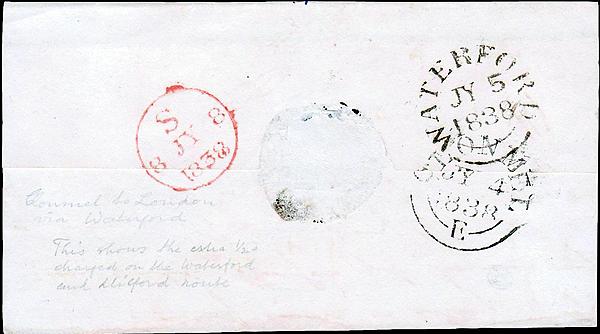 Both sides of a letter from Clonmel, Ireland, to London via Waterford, dated July 4, 1838, a scarce example 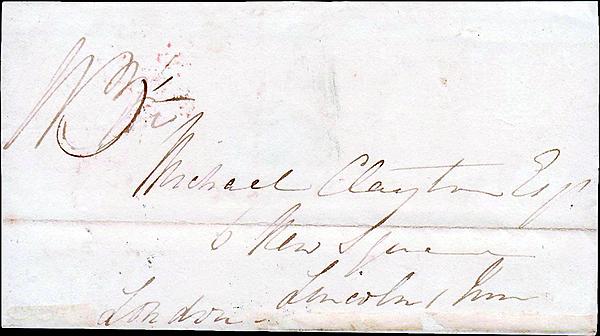 To the keen eye of a collector of British postal history, the postage charge of “1/3½” (1 shilling, 3 and a halfpence) marked at upper left on the front of the folded wrapper shown nearby begs for further investigation.

Postal historians know that most postage charges on British preadhesive mail were charged in whole pence. Rarely does postage include fractional currency.

The most common explanation for fractional postage is the Scottish wheel tax, a surcharge of an additional halfpenny collected by the post office to help maintain roads in Scotland.

On June 9, 1813, an act of Parliament required the post office to collect an additional surcharge of ½d above standard postage rates to help maintain roads in Scotland.

The road tax was turned over by the post office to private turnpike trustees, who were responsible for maintaining roads in good condition, so that carriages carrying mail could use them unimpeded.

For 26 years, from 1813 to 1839, mail carried by four-wheeled vehicles within Scotland and across the Scottish border to and from England was surcharged an additional halfpenny.

The cover pictured on page 27 shows an “Addl. ½” handstamp indicating the application of the Scottish wheel tax was collected upon delivery along with the standard postage of 7d.

More than 150 distinctive halfpenny surcharge marks were used in connection with the Scottish wheel tax. Many covers from the 26 years the wheel tax was in effect have survived.

The wrapper shown at the beginning of this article was sent to London from Clonmel in Ireland and charged 1sh, 3½d. It went nowhere near Scotland, however, so what explains the inclusion of a halfpenny in the total postage?

Other markings on the letter provide clues to explain the fractional charge. A backstamp indicates that the wrapper was mailed in Clonmel on July 4, 1838.

The letter went from Clonmel to Waterford, a port at the southeastern tip of Ireland, as evidenced by the Waterford cancel on the back.

From Waterford, mail destined for London was carried by boat across the Celtic Sea to Milford Haven in south Wales.

Milford Haven was one of four port cities in west Britain used to transport mail to and from Ireland. The road into Milford from the east had been in existence since the Elizabethan era (1558-1603) and, over the centuries, had fallen into disrepair.

By 1835, people were complaining about the condition of the Milford and other roads to the roads commission.

The July 4, 1838, date of posting is important to understanding the additional halfpenny charge.

A June 21, 1836, act of Parliament authorized “granting an additional Rate of Postage on Letters between Great Britain and Ireland by way of Milford and Waterford.”

This additional rate was “For every Single [sheet] Letter the additional Sum of One Halfpenny.”

The language of the act referred to the “Milford Road Fund.”

Francis Freeling, then secretary of the Post Office, strongly objected to a tax surcharge on mail, calling it an “imposition.” Despite the objection of the post office, the bill was given royal assent.

Prior to postage stamps, which were first available in May 1840, postage charges were usually collected upon delivery. The amount due had to be indicated by the post office on the front (the address panel) of a folded letter.

The fractional “½” at the end of the postage charge on the letter from Clonmel to London is an example of the little known Welsh road repair fund surcharge, of which examples are scarce.

Compared to the Scottish wheel tax, the application of the Milford road tax is more difficult to identify. No distinctive handstamps were produced for the Welsh equivalent, so collectors cannot rely on any special marking to identify Welsh road repair surcharged covers.

The primary giveaway clues are the manuscript “½” penny fraction written at the end of postage charges, a Waterford date­stamp, and the date of posting, which must be between June 21, 1836, and Dec. 5, 1839.

The varying postage rates based on miles from mailing to destination were unified into a single rate of 4d for under half an ounce.

The fact that the Welsh road repair fund surcharge of a halfpenny was in effect just three years, five months and 13 days accounts for the relatively low number of surviving examples.

Unlike examples of the Scottish wheel tax surcharge, which can be bought by collectors for as little as $6, examples of the halfpenny Welsh road tax are scarce and, therefore, expensive. The example shown in this article cost £160 (about U.S. $260).