The value of observation in expertizing: Is it real or fake? 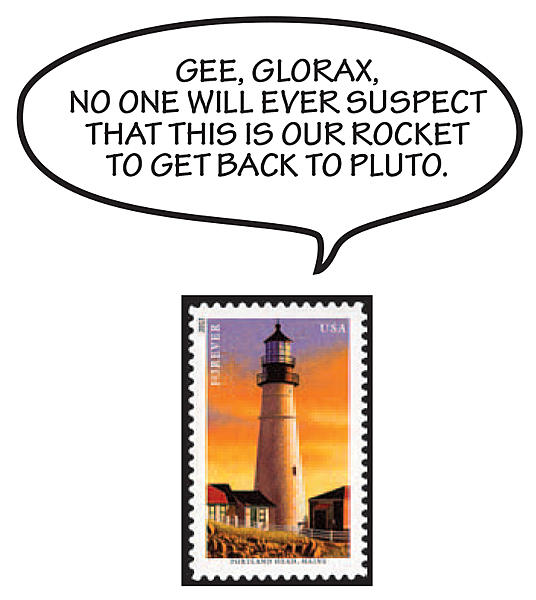 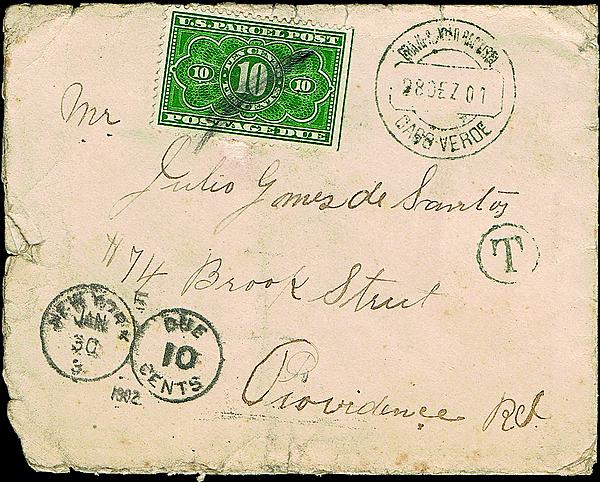 What is it about this 1901 cover that has been faked? The answer appears in the accompanying article. 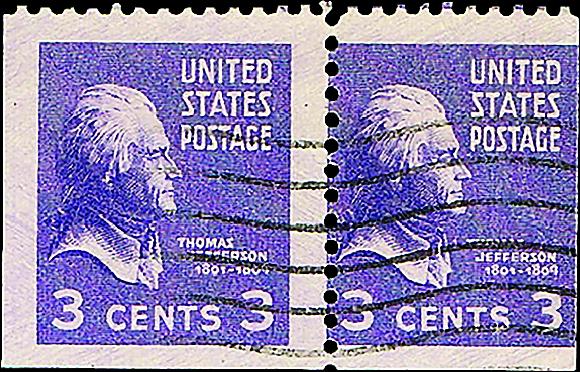 Raw material for faked single imperforate stamps, like the 3¢ Bank Note stamp, can be from jumbo perforated examples such as the 2¢ stamp, or from widely perforated booklet-pane singles. 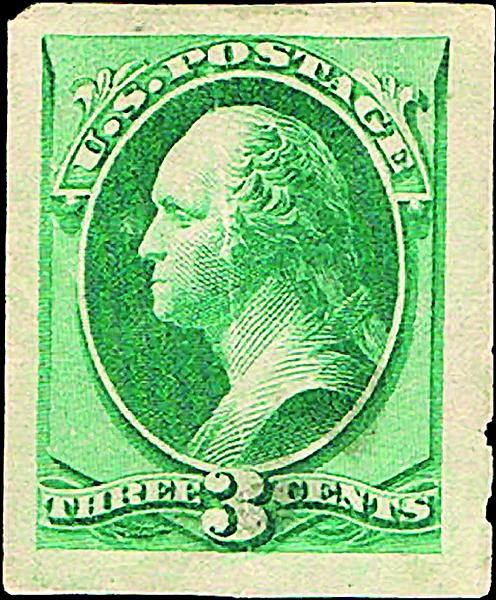 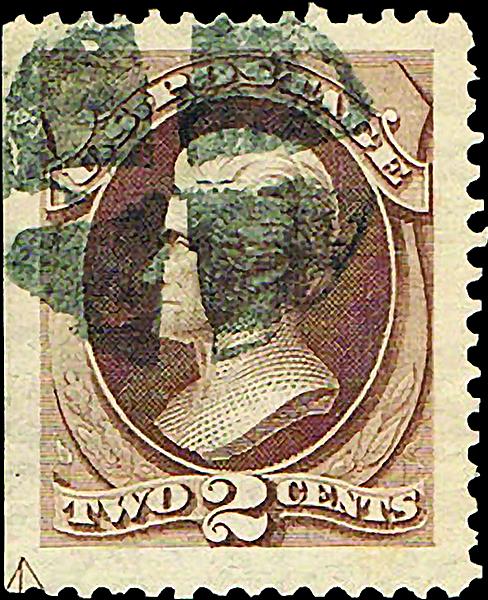 Graphically cropped from a cover, this seemingly imperforate 1941 6¢ Transport stamp was clipped from a booklet pane.

What appear to be perforations on this strip of three 1¢ Liberty issue George Washington coil stamps actually are punctures created by teeth that held the coil roll in place in a coil dispensing machine.

The stamps on this seemingly double-perforated strip of 1973 commemoratives were altered by the addition of a second row of horizontal perfs.

I am often asked if such-and-such an item should be submitted for expertizing. The default answer is “yes,” but there are three general exceptions.

The first is when the cost of expertizing is more — often far more — than the value of the item, although that is not an absolute rule. The scholar who needs to verify his opinion for his study might find the cost of a certificate worthwhile.

Even cheap stamps have been faked, especially when overprinted or surcharged.

A few philatelists seem to collect certificates with as much passion as they collect stamps. Value to them is not the most important factor: assuring that their stamps are genuine and unaltered is.

Since we all get to collect however we wish, I have no problem with this.

The second exception is when the item is evidently what it seems to be.

Stamps that fit into this class, when being looked at by any reasonably experienced collector, include the United States 1847 5¢ and 10¢ stamps (Scott 1 and 2), and Great Britain’s 1840 Penny Black (1).

Expertizing might still be desired if the owner wants to know about possible defects, plating or minor varieties that are not obvious, but the basic stamp is what it is.

The third “do not submit” category represents material discussed in this column and in the next: philatelic items that can be eliminated as being genuine through observation by anyone with a bit of knowledge, a magnifier, an up-to-date catalog and a logical mind.

I was asked recently about submitting a vertical strip of three of the United States 8¢ Rural America Angus Cattle stamp (Scott 1504). The stamps on the strip, pictured here, each have two sets of horizontal perforations.

The owner — an error, freak and oddity collector — can be forgiven for hoping that this is a genuine variety, as there are genuine double perfs in one direction known on some of the stamps perforated on the sheetfed L-perforator during the 1960s and 1970s. But this is not one of them.

What is the tip-off? The perforations under the words “Rural America” are smaller than the genuine perforations above the words. The second set of perfs was added after production, and the piece is nothing but a curiosity.

Such a small difference can escape notice when hope overcomes reason.

A similar item is shown here, graphically cropped: a 1¢ Liberty series George Washington coil strip (Scott 1054), on cover with doubled vertical perforations. In this case, the second set of perforations (within the stamp design) is a bit ragged and is, again, smaller than the genuine perforations.

The origin of this effect is a coil dispensing machine set to dispense stamps one at a time. Insert a penny, and one stamp comes out. Teeth clamp down on the next stamp to prevent the buyer from getting anything more than what was paid for.

In this case, those teeth are of the same gauge as the genuine perforations, and create puncture holes that match up pretty well.

Also shown graphically cropped from its cover is an apparent imperforate single of the 1941 6¢ Transport airmail stamp (Scott C25).

The stamp has decent margins, but it is a nearly inviolable rule in expertizing that one never gives a good certificate to single imperfs. In this case, there is a really good reason.

This design was also released in the form of a three-stamp vertical booklet pane. The bottom stamp of that pane has no perforations at right, left or bottom.

Cut the perforations off the top and you have an instant, though quite faked, imperforate stamp.

This phenomenon is often seen with early U.S. stamps where the settings for the lines of perforating pins were variable, causing the occasional jumbo stamp, such as the 2¢ margin single shown nearby. Cut off the perforations, and you have what appears to be a credible imperf single, such as the 3¢ stamp next to it.

Also shown is a pair of stamps from a 1938 3¢ Prexie booklet pane. You will see that the lower left stamp from the booklet pane of six is off both high and to the right. And you can picture someone clipping just inside the perforations, together with the straight edges at left and bottom, leaving what would appear to be a nice imperforate single with quite large margins.

The bottom line is, beware of the good-looking imperforate single.

Covers can also be subjected to the logical approach. An example is the cover canceled in Cape Verde Dec. 28, 1901, and sent without postage. On arrival in New York in January 1902, it was rated 10¢ postage due and sent onward to the addressee in Providence, R.I.

On arrival, the 10¢ was collected as the letter was delivered, and evidence thereof was affixed to the front of the letter.

How can I be so sure? The parcel post postage due stamps were issued in 1913 to complement the parcel post stamps released that same year for the new fourth class services approved by Congress in 1912.

The five-stamp parcel post postage due set consists of 1¢, 2¢, 5¢, 10¢ and 25¢ denominations. The aggregate value for used examples in the 2015 Scott Specialized Catalogue of United States Stamps and Covers is $77, with the 10¢ stamp being the most desirable, at $45.

But the same stamps used on cover are much more difficult to find, and much more pricey than the value for the used stamp off cover.

That value difference is quite an incentive to create a fake rarity. But the 1901 cover shown here, which is genuine enough in its basics, fails logical examination because the stamp on it was not issued until 1913.

The owner need not bother submitting it for an expert opinion.

In the next column in this expertizing series, we will look at more examples of stamps that have no prayer of getting a genuine certificate.

Picture yourself looking out over the water from the top of a lighthouse, such as the structure shown on the Portland Head Lighthouse stamp issued as part of the 2013 New England Coastal Lighthouses set.

That particular stamp was used for the September cartoon caption contest.

Of the hundred or so readers who took the challenge, some remarkably similar themes based in popular culture were used by many entries.

The musical On A Clear Day You Can See Forever was translated by reader Bill Kriebel of Philadelphia, Pa., to “On a clear day, I’m not necessary!”

The song title You Light Up My Life was used by several entries, alone and in context, such as “My job as lighthouse keeper keeps me singing, ‘You light up my life,’” from Thomas Misiewicz from Martinsburg, W.Va.

“It’s lonely at the top,” a common bit of societal wisdom, was used multiple times; the first to arrive was from Michael Cochran of Libertyville, Ill.

Another song, one originally relating to sails, was converted to comment on a New England sports team by Richard Herman of Lido Beach, N.Y., whose entry was “Red Sox in the sunset …”

The most popular theme was based in the parallel between housekeeping and the stamp. This is typified by the entry from Robert North of Van Nuys, Calif.: “But the ad said, ‘Easy job. Only a little light house keeping involved.’”

The daily trip to empty the mailbox was the second most popular theme. This entry is from Arnie Fenske of Eldon, Mo.: “I don’t care what you say, it’s your turn to walk down and get the mail!”

The nonphilatelic winner, shown here with the Lighthouse stamp, casts the lighthouse in a completely different role. It is from Charles Vukotich, sent in via e-mail.

On the philatelic side, Howard Banks, who also submitted by e-mail, came up with “I knew becoming a lighthouse attendant was a longterm commitment, but forever? Really?”

“You call this a penthouse with a view?” from Boyd DeGeest of Winona, Minn.

“I see a postage rate hike on the horizon,” by Steve Kotler of San Francisco, Calif.

“I hope we’re high enough up here when the sea of Postal Service red ink hits us,” sent by A.J. Zappa of Tucson, Ariz.

“Martha, add 200,000 candles to the shopping list, just in case the power goes out,” from Michael Moticha of Apple Valley, Calif.

“Where do I keep my collection of lighthouse stamps and covers? Why in a Lighthouse album, of course!” by Bradley Miller of Huntsville, Ala.

“No, Sarah, you can’t see Russia from here!” sent by Emmanuel Atsalinos of Silver Spring, Md.

The next cartoon caption contest will be announced in the Nov. 10 Linn’s.