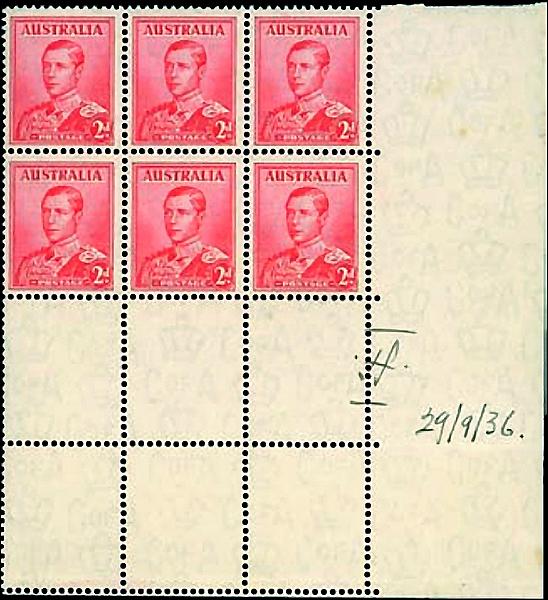 Changing hands for the first time since 1936, a unique block of six of an unissued 2-penny King Edward VIII stamp set a new world record price for an Australian philatelic item Oct. 16 at a Spink auction at its headquarters at 69 Southampton Row, Bloomsbury, London.

The sale of the block, a highlight of the Vestey collection of Australia, was previewed online at Linns.com Oct. 3 and in the Oct. 20 Linn’s Stamp Monthly. It was hammered down for £200,000 plus 20 percent buyer’s premium, or about US$387,000.

The block, printed on Crown-and-C of A paper, includes an interpanneau (between-the-sheets) margin at the bottom. It is hinged in the margin only.

Called by Spink “undoubtedly the greatest rarity in Australian philately,” the stamp is unlisted in the Scott or Stanley Gibbons catalogs, though it does appear in the Brusden-White Australian Commonwealth Specialists’ Catalogue.

“This was the first time that it has come on the market,” said Nick Startup, a Spink representative. “The block was sent directly from Lord Huntingfield to the present Lord Vestey’s great-grandfather, the 1st Baron Vestey.”

As is usual, Spink would not reveal the identity of the buyer.

In September 1936, a few weeks before the controversy over Edward VIII’s desire to marry American divorcee Wallis Simpson came to a head, Lord Huntingfield, the governor of the Australian province of Victoria, made a ceremonial visit to the printers.

A new stamp was in the works, a scarlet 2d definitive showing the boyish-looking monarch in naval uniform. Noting his approval, Lord Huntingfield initialed and dated a sheet.

A few weeks later, to thank the governor for his visit, John Ash, the head of the printing house, sent the signed sheet to him as a memento.

Then the king abdicated, and the Australian postmaster general decided not to issue the stamp. With evident embarrassment, Ash wrote the governor again, asking for the sheet to be returned for destruction.

The governor obliged – mostly. In the meantime, he had separated the bottom corner block, with his initials and date in the margin, and sent it off to a friend in England. He wrote that he “thought it very doubtful” he could get the six stamps back. Ash thanked the governor, and let the matter lie.

The block was accompanied in the Spink sale by the original correspondence between Huntingfield and Ash.

The English recipient was Sir William Vestey, a shipping magnate and pioneer of refrigeration who built his meat importing business into a global trade empire. The Vesteys are also renowned in Australia for their dispute with the aboriginal Gurindji people over land rights and working conditions.

In 1936, Vestey had just joined the Royal Philatelic Society. The significance of his newly acquired block of Edward VIII stamps did not become apparent until later, when it was realized that all the printed stamps and everything related to their design and production had been destroyed.

Over the years, as the Vestey collection of British Empire rarities grew, the block became a treasured centerpiece, inherited by Lord Vestey’s son and later his great-grandson, now the 3rd Baron Vestey. The block was exhibited at the Royal Philatelic Society London in 2009 and at the Melbourne International Exhibition last year.

Spink (www.spink.com) is offering the Vestey collection of Leeward Islands, Bahamas and Turks Islands Dec. 11, and further parts in 2015.