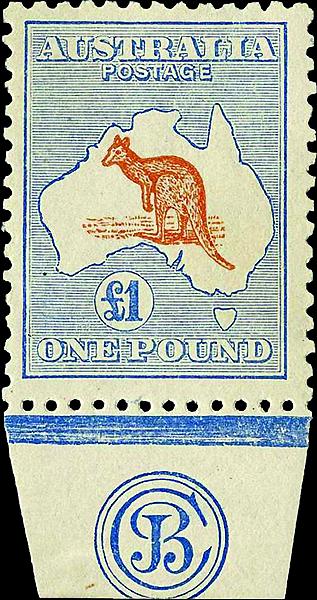 One of a reported three known mint examples of Australia’s £1 ultramarine and brown orange Kangaroo with monogram attached. The stamp was offered by Mossgreen as part of the Julian Sterling collection.

On Aug. 12, the Australian auction firm Mossgreen sold the second and third parts of the Julian Sterling collection. Part 1 of the sale was reviewed in Linn’s July 21.

As in the earlier session, the highlights were stamps from the Kangaroo and Map and King George V series of Australia, with attached tabs showing printers’ circular monograms or imprints.

As these only became popular after the stamps went off sale, few survive.

There are reportedly only three mint examples of the £1 ultramarine and brown orange Kangaroo (Scott 56) known with the circular “JBC” monogram attached. One of those three is in the Royal Collection, while the other two were in the Sterling collection.

A well-centered example with the additional perk of an inverted watermark sold for the equivalent of $50,800, including the 22 percent buyer’s premium levied by Mossgreen on all lots. The second example, less well centered and with normal watermark, was one of the very few lots that did not find a buyer.

The stamp is known with the right-hand figure of value thinner than it should be. On paper watermarked with a multiple crown and A, the stamp is not uncommon, but with a simple wide-crown-and-narrow-A watermark (Scott 19a), it is rare, with only five known.

An unused, lightly hinged example, described as the finest of those five, sold for almost $26,000.

Another King George V plate flaw, the 4d violet with a white line through the words “Four Pence” (variety of Scott 32), is also one of just a handful of mint examples known. Described as one of the “jewels of Australian philately,” it sold for $22,600.