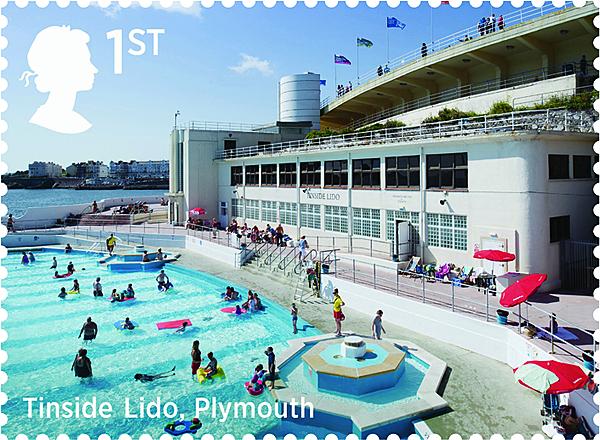 The Tinside lido, an outdoor saltwater pool beside Plymouth Sound, was built in 1935 in the art deco style. 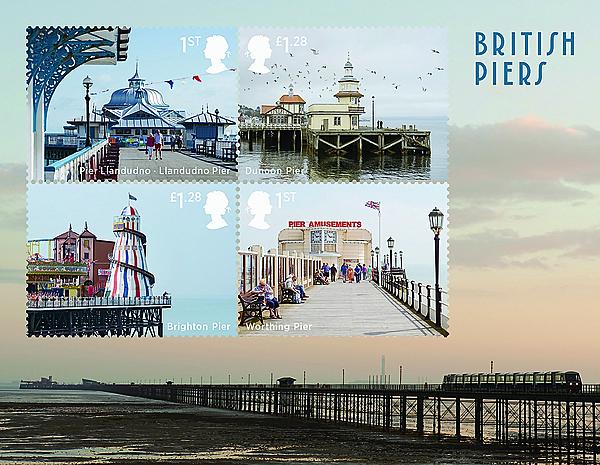 The 97-penny and £1.28 stamps in Great Britain’s Seaside Architecture set to be issued Sept. 18 reproduce photographs of the pier at Bangor, the Southwold lighthouse, the Casino at Blackpool Pleasure Beach and a shelter at Bexhill-on-Sea. 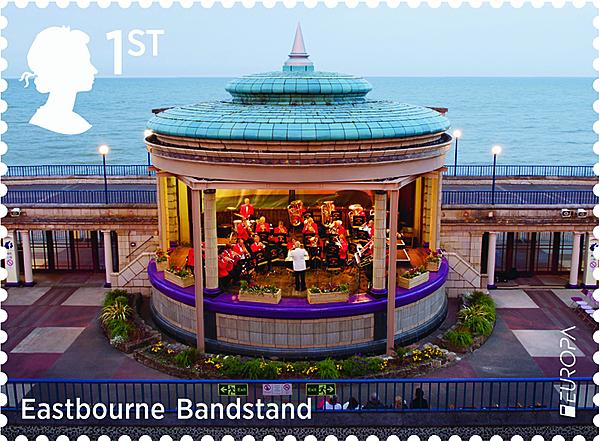 Great Britain’s 2014 Europa stamp is part of the Sept. 18 Seaside Architecture set. The first-class stamp pictures a band playing in the Eastbourne Bandstand.

Great Britain’s Royal Mail highlights seaside architecture from the Victorian era through today on 10 stamps to be issued Sept. 18.

The set includes Great Britain’s 2014 Europa stamp with the theme of musical instruments. This nondenominated first-class stamp reproduces a photograph of a brass band playing in the Eastbourne Bandstand.

All of the stamps feature photographs taken by Lee Mawdsley.

Royal Mail said of the designs: “The chosen selection captures distinctive types of seaside architecture from key periods when major investment led to innovation, in particular the late Victorian era and interwar years. There is a good range of resort type — large and small, well-known and less so — from the number one working-class resort of Blackpool to the more sedate Southwold which has grown in popularity as a result of its quiet nostalgic feel.

“All of the chosen structures are fine examples of their type and the fact that they have been newly photographed as vibrant, well-used places helps celebrate the resurgence of interest in the British seaside which has happened over the last two decades.”

The Victorian era is represented by six of the 10 stamps in the issue.

Construction on the lighthouse started in 1887, and it became fully operationally Sept. 3, 1890. As can be seen the stamp design, the lighthouse’s white tower stands among the houses of Southwold, a town on the North Sea Coast.

Britain’s Heritage Trail website says of this pier at Bangor: “Bangor, along with neighbouring Llandudno, probably gives today’s enthusiast the best opportunity to see a how traditional promenade piers would have looked in their heyday of the 1860s.

“Ironically, construction of Bangor Pier did not commence until the mid 1890s, making it one of the later piers to be built. Designed by J.J. Webster of Westminster, and at a cost of some £14,475, Bangor’s new 1550ft (470m) pier opened to the public on 14th May 1896 with a ceremony performed by Lord Penrhyn.”

The Llandudno pier, mentioned in the Heritage Trail quote, is pictured on a stamp in the Seaside Architecture souvenir sheet. This first-class stamp is se-tenant with three other stamps showing the piers at Dunoon, Brighton and Worthing.

Pictured in the selvage area of the souvenir sheet is the 1.34-mile-long Southend pier, the longest pleasure pier in the world.

The Worthing pier is shown on the first-class stamp in the lower-right corner of the souvenir sheet. Designed by Robert Rawlinson, it opened in 1862 and has been enlarged and rebuilt several times since. The amusement arcade, shown in the background on the stamp, was added in 1937.

The £1.28 stamp in the upper right corner of the souvenir sheet features Scotland’s Dunoon pier. The first pier at Dunoon was built in 1835. After being expanded twice, it was replaced in 1895.

Architecture of the art deco era is known for its geometric shapes, such as the semicircular Eastbourne Bandstand on the Europa stamp and Tinside lido, shown on another first-class stamp. Both were built in 1935.

The website for the bandstand gives the following history: “The building of the Bandstand formed part of the main sea front improvements, cost £28,000 to construct and was surmounted with a stainless steel spire. The project engineer was Leslie Rosevere.

“The first concerts were given on the 28th July 1935 with a total of 10,400 attending all three concerts and paying 3d each. The Bandstand was officially opened on the 5th August 1935 by the Lord Lieutenant of the county, Lord Leconfield with an audience of 8,000.”

Today, the bandstand hosts more than 100 concerts each year.

Tinside lido, a saltwater pool that juts into Plymouth Sound, was called “one of the finest open-sea bathing centres in the country” during its heyday.

After being closed in 1992, it was restored and reopened in 2003. Since then, it has frequently appeared on lists of the best outdoor pools in the United Kingdom.

A £1.28 stamp shows the Casino, an entertainment complex, at Blackpool Pleasure Beach.

The Pleasure Beach amusement park was founded in 1896 by William George Bean. In the 1930s, modernist architect Joseph Emberton was brought in to redesign the park. This included replacing the original 1913 Casino building with a new one in 1939.

Britain’s seaside resorts continue to evolve. Royal Mail’s press release says about the Bexhill-on-Sea shelter shown on a £1.28 stamp: “Innovative contemporary architecture has been a major driver of regeneration of the seaside and even seemingly ephemeral structures like shelters can make a big impact on the overall feel of an otherwise traditional promenade. Bexhill-on-Sea has managed to blend a Victorian sea front with iconic 1930s architecture and new 21st-century shelters.”

The firm Why Not Associates designed the stamps and souvenir sheet. The stamps are 41 millimeters by 30mm, perforated gauge 14.5 by 14, and the souvenir sheet is 115mm by 89mm.

Joh. Enschede of the Netherlands printed the souvenir sheet, and International Security Printers of England printed the other stamps by offset in sheets of 50, sold in panes of 25 at most postal outlets.

The products offered in conjunction with the Seaside Architecture stamps include first-day covers, 11 postcards reproducing the designs of the stamps and the souvenir sheet, and a presentation pack including the stamps and text by architectural historian and writer Kathryn Ferry.