A blue Bowlsby plate essay on white paper as a block of four, perforated all around and in between (Scott 63-E13f). 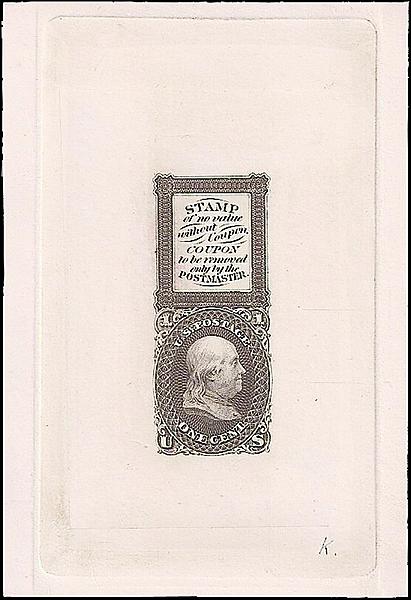 Since the day that I received my first Bowlsby coupon essay (Scott 63-E13) in an approval selection from Falk Finkelburg, it has been a favorite of mine. This small piece of paper has a fabulous story to tell.

George W. Bowlsby was a soldier in the American Civil War. He was mustered in as a lieutenant at Monroe, Mich., around March 20, 1862, as a member of the 15th Michigan Infantry, Company K. Bowlsby quickly rose to the rank of captain, which probably made him second in command of his company.

On Sept. 30, 1863, he was discharged. Based on his military records, his discharge was likely the result of wounds received in battle.

He returned to his home in Monroe where he operated the local railroad depot. I’m sure that he had plenty of time between trains to tinker with his love of invention.

Bowlsby held several patents, but will be remembered to philately for his famous coupon essay that received a patent Dec. 26, 1865. This was a full two years before we start to see the many different grill essays and other prevention-of-reuse experiments that appear in the Scott Specialized Catalogue of United States Stamps and Covers.

Lot 1334 in the Robert A. Siegel sale No. 816 of the Finkelburg estate shows the lower half of a crudely designed stamp that appears to have been perforated through the middle with a sewing machine. (The sale can be viewed online at www.siegelauctions.com.)

The item is affixed to a piece of paper, and at the top of the paper is the manuscript notation “Stamp After Cancellation.” This item closely resembles the drawing in Bowlsby’s original patent papers.

In recent years, there has been offered at auction a block of 1¢ National large banknote stamps with similar sewing machine-type holes across the middle of the stamps. The stamps are fully perforated around the edges, and only the bottom half of each stamp is gummed. While these may be the true Bowlsby experiments, it is the colorful large die and plate essays that attract collectors.

National went to great expense to engrave the die and transfer the image to a 50-subject plate. It is reasonable to assume that National acquired the patent from Bowlsby. They tried to buy up any patent that they felt could pose a threat to Charles F. Steel’s patent for the stamp grill.

They wanted the government to focus only on their grill experiments, which led to the production of grilled postage stamps, a continuation of their contract and, yes, more money.

The Bowlsby patent, based on the time and expense put forward by National, was their plan B.

I believe that part of the cachet surrounding the Bowlsby essays comes in the many colors available as large die essays and the several distinct perforation varieties of the plate essays.

The die essays are truly rare. I have yet to find more than three of any one color.

There may have been two sheets of 50 available of the perforated plate essays.

However, I doubt more than one sheet ever existed for the imperforate pelure or white paper varieties.

At least one sheet was grilled with an experimental C-grill at some point in time. A split grill variety also exists from this sheet.

I have not seen more than five examples of this scarce variety in the past 35 years. It is truly rare.

One has to wonder how these stunning bits of paper made it into the marketplace. My guess is they were liberated by Henry G. Mandel, who was a vice president of the American Bank Note Co. after National and Continental were consolidated into it. He sold everything that he had accumulated from the files at American to the Earl of Crawford in England.

In November 1915, John Klemann of Nassau Stamp Co. braved the U-boats to go to England to bring back the Crawford collection.

To give you some idea of the size of the collection, Klemann sold items out of it until he retired around 1939. Most of the balance was then sold in a series of seven name sales by Harmer, Rooke & Co., from 1941 to 1944.

At that time, a still-considerable balance was acquired from Harmer, Rooke by New York auctioneer Eugene Costales. He was able to offer material from the lot from the late 1940s well into the 1950s.

My next column will continue to explore some of the different essays that were developed for the prevention of reuse of postage stamps.