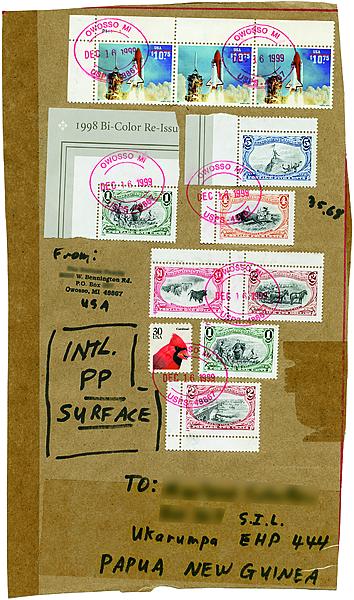 This 1999 parcel wrapper addressed to Papua New Guinea is franked with $35.68 in postage using several high-denomination stamps. The franking exactly satisfied the international surface parcel post rate for a package weighing not more than 22 pounds.

With my deadline looming, it was time to find an interesting item to share in Dollar-Sign Stamps.

Following dinner one evening, I started reviewing some of the larger covers in my collection franked with high-denomination stamps.

Some of them brought back good memories, because I had shared them with readers during the past decade or so.

Not wanting to repeat myself, so to speak, I kept searching.

Another 10 minutes or so of digging turned up the parcel wrapper illustrated nearby.

Six strikes of an oval handstamped postmark indicate the package was mailed Dec. 16, 1999, from Owosso, Mich.

From that small Michigan town, the parcel embarked on a long journey to its destination in Papua, New Guinea.

Given the total franking of $35.68, the original package was heavy.

How heavy? To answer that question, we need to determine the method of mailing. Fortunately, the sender provided the necessary information on the wrapper by writing “Intl. PP Surface,” shorthand for International Parcel Post Surface.

Sending the package via parcel post was much cheaper than using first-class mail, but the trip took much longer.

To save space, the table lists rates for packages weighing not over 20 pounds. In this case, such a parcel mailed to New Guinea required postage of $34.20.

A footnote below the table reads: “This table in PB [Postal Bulletin] 21996 (April 22, 1999) goes up to 70 lbs but is truncated because these added rates will rarely be seen on postal items.”

Because my parcel wrapper had more postage on it, the contents had to weigh more than 20 pounds.

A quick online search of the April 22, 1999, Postal Bulletin revealed that the international postage rates were set to increase May 30 of that year.

In the table listing the new rates for international parcel post, I saw that the forthcoming rate for a package weighing not more than 22 pounds sent to a destination such as Papua New Guinea (under the heading “All Other Countries”) was $35.68.

A correct franking using an attractive array of stamps makes for a great piece of postal history, wouldn’t you say?