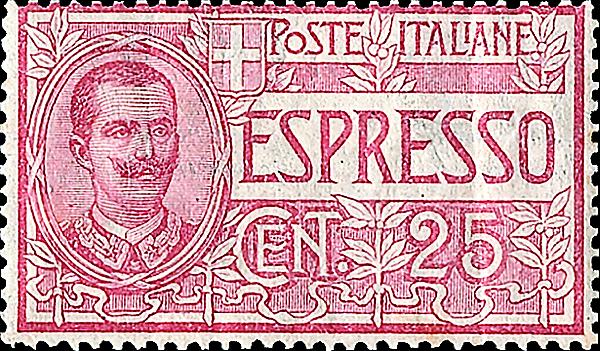 This 1903 Italian issue was the first designated special delivery stamp in Europe.

A local coffee shop here in central Pennsylvania has a large framed image of the Italian 1903 25-centesimo stamp (Scott E1) as a wall decoration, in the apparent belief that the special delivery stamp was an advertisement for espresso coffee.

Espresso actually is a method of brewing coffee in a special machine, not a type of coffee bean, and the strong result served in a small cup is a caffe in Italy, swallowed quickly in one of the multitude of small bars in the country. The drinking process is speedy and the caffeine jolt provides an energy boost, so espresso — fast, speedy, swift — is a good descriptive word both for the coffee and for special delivery.

The Universal Postal Union convention of 1879 recommended a fee of 30 centimes for express mail service (above and beyond the ordinary postage) but the UPU did not formalize the recommendation as a statute until 1891.

An express item would travel as regular mail to the destination post office, and then it would be taken by a special messenger (not via the regular mail delivery method) and delivered to the addressee. The express fee had to be paid in advance, and it was kept by the post office of origin.

By the late 1800s, Italy had an established special delivery mail service and had printed etiquettes (adhesive labels) to identify espresso letters, although a handwritten notation was permitted in place of a label. (Domestic special delivery service began in the United States on Oct. 1, 1885, with the issue of Scott E1, the first designated special delivery stamp in the world.)

The first Italian stamp to pay specifically for espresso/special delivery mail was issued in June 1903 but distributed in only a few cities, including Naples and Bologna, according to Roy A. Dehn’s Italian Stamps: A Handbook for Collectors (1973). General distribution was delayed until Jan. 1, 1904, so that arrangements could be made throughout Italy for special delivery service.

King Victor Emmanuel III had issued a decree in Rome on May 3, 1903, saying that the new stamp “will be printed upon a little rectangular piece of paper, measuring 23 mm. in height and 38 mm. in width; it will be scarlet [the Scott Classic Specialized Catalogue of Stamps and Covers 1840-1940 calls it rose red] in color and will bear our Royal Effigy, surrounded by various ornamentation and the inscriptions ‘Poste Italiane — Espresso — Cent 25.’”

The 25c stamp would pay for domestic special delivery service, and with additional postage it would be valid on express letters “abroad in countries where a similar service is provided.”

The stamp was designed by G. Carpanetti and engraved by Alberto Repettati on the ordinary stamp paper being used for Italian issues, with horizontal crown watermarks. It was printed by letterpress and comb-perforated gauge 14 by 14.

As the first special delivery stamp in Europe, Italy Scott E1 is a worthwhile addition to any general worldwide stamp collection and a must-have for any collection of special purpose stamps.

The Scott Classic specialized catalog values a mint copy at $50 and a used one at only $1.20, much less than a cup of espresso at most coffee outlets.