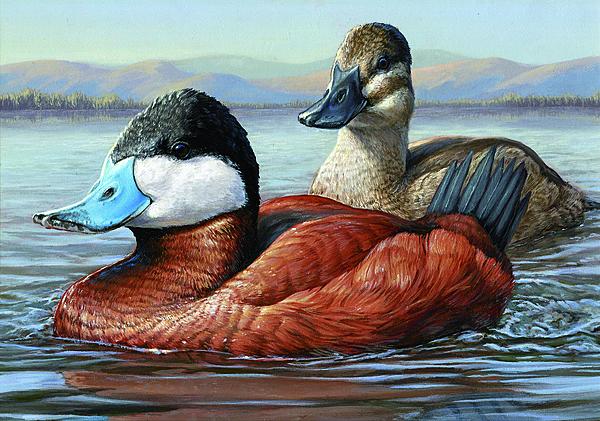 Jennifer Miller’s acrylic painting of two ruddy ducks won the 2014 federal duck stamp art contest held Sept. 20-21 in Sheperdstown, W.Va. Her artwork will appear on the duck stamp that is scheduled to be issued in June 2015.

Miller’s acrylic painting of two ruddy ducks will appear on the 2015 federal duck stamp, which is scheduled to be issued in late June 2015. This is Miller’s first duck stamp contest win.

Ron Louque of Charlottesville, Va., took second place with his acrylic painting of a red-breasted merganser. Louque is a previous duck stamp contest winner. His painting of two snow geese in flight appears on the 2003 federal duck stamp (Scott RW70).

Frank Mittelstadt of Beaver Dam, Wis., placed third with his acrylic painting of a Canada goose.

Of the 186 entries in this year’s two-day competition, just 17 made it through to the final round of judging.

The judges for the 2014 contest were Gloria Erickson, chair of the Nebraska Environmental Trust Board; Delwin Benson, professor and extension wildlife specialist in the Colorado State University Department of Fish, Wildlife and Conservation Biology; George Petrides Sr., founder of Wild Bird Centers of America Inc.; Peter Anastasi, a retired employee with the Federal Duck Stamp Program; and Terry Miller, a wildlife artist who works primarily in the medium of graphite.

Waterfowl hunters age 16 and older are required to purchase and carry the current migratory bird conservation and hunting stamp commonly known as the duck stamp. Conservationists, stamp collectors and others may also purchase the stamp in support of habitat conservation.

A current duck stamp may be used for free admission to any national wildlife refuge open to the public.

Although not valid for postage, federal migratory bird hunting and conservation stamps, commonly known as duck stamps, are popular collectibles. They are listed and valued with U.S. revenue stamps in the Scott Specialized Catalogue of United States Stamps and Covers, and in Vol. 1 of the Scott Standard Postage Stamp Catalogue.

Ninety-eight percent of the proceeds from the sale of federal duck stamps go to the Migratory Bird Conservation Fund, which supports the purchase of migratory bird habitat for inclusion into the National Wildlife Refuge System.

Federal duck stamps are available at many national wildlife refuges, from the U.S. Postal Service, or online at www.fws.gov/duckstamps/stamps.htm.