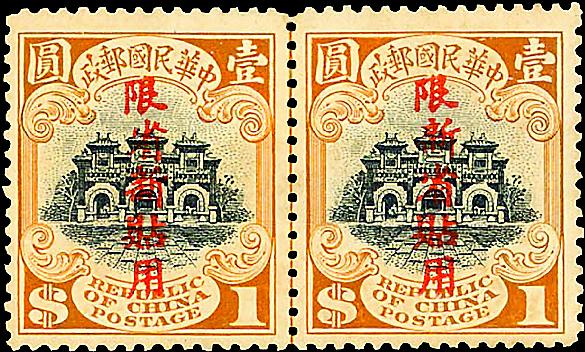 One of three pairs recorded of the 1915 $1 ocher and black 1915 first issue of China’s Sinkiang province with the second and third characters of the overprint transposed on one stamp. This pair will be auctioned in the first session of the Kelleh 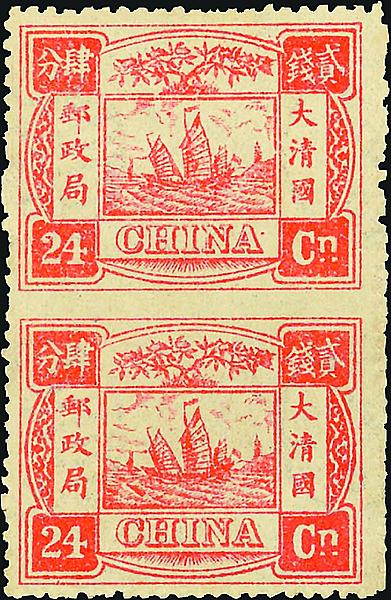 This unused original gum imperf-between pair of China’s 24-candareen carmine first printing of the 1894 Empress Dowager 60th Birthday issue from the Michael Rogers collection will be offered at auction Sept. 27 during the three-day inaugural sale

The recent acquisition of Michael Rogers Inc. by Daniel F. Kelleher Auctions has resulted in a new firm with a lengthy pedigree that is about to make its official public auction debut.

In its upcoming Sept. 26-28 auction series, Kelleher & Rogers will offer collectors a wide-ranging selection of stamps and philatelic material from China and throughout Asia, including items from the Michael Rogers Inc. stock and the Lyons Livingston stock.

The Sept. 28 session will feature stamps of the People’s Republic of China, including a neatly postmarked postally used example of the 1968 8-fen The Whole Country is Red stamp (Scott 999A), items from the stock of the Fidelity Trading Co. of California and more.

The auction will take place in five sessions over the course of three days at the Kelleher & Rogers offices in the Malaysia Building, 50 Gloucester Road, 9th Floor, Wan Chai, Hong Kong.

Bids also are accepted online, and by mail, e-mail and telephone.

The Michael Rogers collection of China includes Chinese local posts, issues of the empire and the republic, and back-of-the book issues and collections, with individual postal history lots from the first half of the 20th century.

A key item from this group, described as “a cornerstone exhibition piece,” is an unused vertical pair, imperforate between, of the 24-candareen carmine first printing of the 1894 Empress Dowager 60th Birthday issue (Scott 24a).

The 24c Junk on the Yangtse stamp is the high value of a nine-stamp set created to mark the birthday of Empress Tsz’e Hsi.

The imperforate-between vertical pair is listed in the 2014 Scott Specialized Catalogue of Classic Stamps and Covers 1840-1940 only in unused condition, with a value of $30,000 in italics (the italics signal that the item is difficult to value accurately).

Accompanied by a 1990 American Philatelic Society photo certificate, the example on offer is described by Kelleher & Rogers as “an absolutely magnificent example of this, one of the Rarest Dowager varieties, fresh as the day it was printed with luxurious rich color and excellent centering, full, near pristine o.g. [original gum] which shows just the slightest evidence of hingeing, Very Fine+, certainly among the finest of the few recorded mint pairs.”

With the Hong Kong dollar equaling approximately 12.9¢ in United States currency in early September, those amounts are roughly the equivalent of US$32,250 to US$38,700 for the estimate, and US$16,770 for the opening bid. Keep in mind that exchange rates fluctuate daily and could be lower or higher at the time of the sale.

The additional sessions of the Kelleher & Rogers three-day public auction include China local posts, empire and republic, as well as Taiwan, Hong Kong, Japan, Korea and other Asia, and one session of scripophily and banknotes.

A treasure in the first session is the $1 ocher and black 1915 first issue of Sinkiang province in an unused horizontal pair with the second and third characters of the vertical overprint transposed on one stamp.

This Scott-listed variety (China-Sinkiang Scott 16a) is described by Kelleher & Rogers as “well centered and sound; some black stockcard offset fibers on original gum, otherwise Very Fine and choice, a splendid and exceedingly rare pair … Only 3 pairs of this Great Rarity recorded, with multiples containing this error being highly prized. One of the ‘Four Treasures’ of the Chinese Republic.”

The Sept. 28 auction of stamps from the People’s Republic of China includes four examples of the popular 1962 $3 Mei Lan-fang souvenir sheet (Scott 628). All have original gum, with three listed as never hinged.

Also offered in this auction are liberated areas, commemoratives and definitives, booklets, collections and more.

Kelleher & Rogers is the new name for the former Dynasty Auctions Co., part of the Daniel F. Kelleher Auctions firm.

“Michael Rogers brings over 40 years of broad philatelic experience to his position with Kelleher,” Gibson stated. “He is also the acclaimed leader in all aspects of Asian philately in the United States as a professional dealer, auctioneer and writer.”

Additional information about Kelleher & Rogers auctions, including online catalogs of the upcoming auctions, can be found at www.kelleherasia.com.