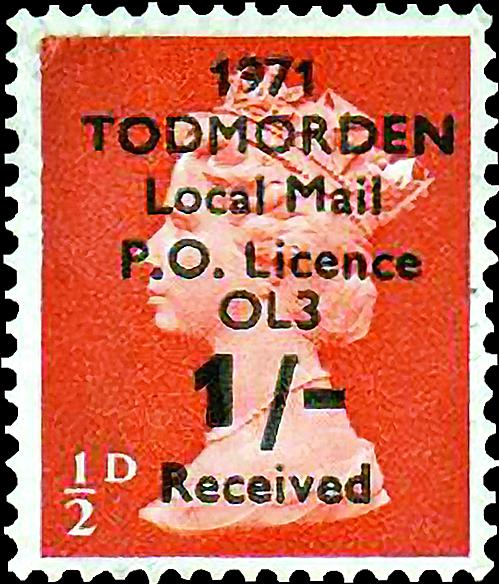 The meaning of this overprint and the reason it was created are not fully known to the author.

Machin stamps were officially overprinted and used in the Republic of Somaliland for only a few days in 1998. Two versions exist: one with a star over the 1-penny denomination and the other without the star.

Great Britain’s Machin stamps have been overprinted with slogans for political propaganda reasons. These two overprints relate to the partitioning of Ireland. 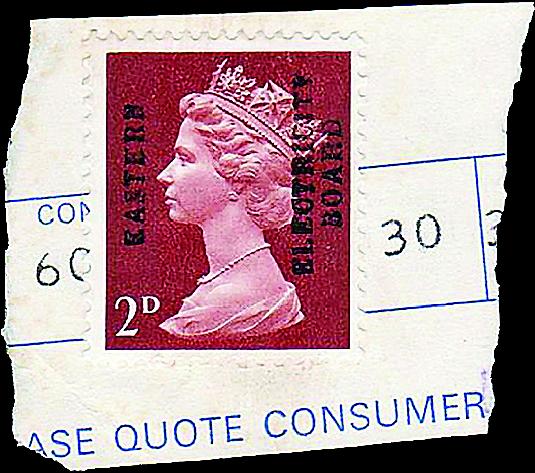 Predecimal Machins overprinted with names and abbreviations of utility companies, businesses and charities were used fiscally to receipt the collection of a duty tax.

Machin overprints fall into several categories, including fiscal use, post office administrative uses, political propaganda purposes and, in one case, use abroad in the Republic of Somaliland in Africa.

Shown nearby is a predecimal 2-penny stamp overprinted “EASTERN ELECTRICITY BOARD.” This is an example of a fiscal use, that is, for tax purposes, because the postage stamp was used to receipt the payment of tax duty.

The stamp duty act required any organization issuing receipts for money it received, such as payment of a utility bill, to collect a 2d fee, much like sales tax on purchases in the United States.

The tax added to general revenue and had nothing to do with moving the mail.

The stamp duty tax was abolished in 1970, so only predecimal Machins were overprinted for fiscal purposes.

A second category of Machin overprints is post office administrative uses. Two styles of overprints applied and used by the post office for varying purposes are shown here.

In 1970, Royal Mail introduced the prestige booklet, a large-size booklet with printing on the selvage of the stamp panes giving information about a specific topic. The first prestige booklet was Stamps for Cooks (Scott BK126).

The other illustrated example of a post office administrative use bears two wide black vertical bars and was created by the post office for use at post office training schools.

At these schools, window clerks are trained by Royal Mail in procedures using actual stamps that have been defaced with narrow or wide vertical or horizontal black bars invalidating them for use on mail.

In 1971, the first of several political propaganda overprints appeared. Two of these are illustrated with this column.

“DAIL ULADH” is Gaelic for “Parliament of Ulster.”

Royal Mail considers any stamps with an unauthorized overprint to be defaced and, therefore, invalid for postage.

The Irish propaganda overprints needed to be tracked down by post office staff, and postage due needed to be collected. This was considered a bothersome activity when these overprinted Machins were applied to mail in Northern Ireland.

Several other propaganda overprints relate to the long-standing Northern Ireland conflict, and others related to advocacy for the independence of the county of Cornwall or “Kernow” in the Cornish language.

Seeking self-determination, Somaliland declared its independence from Somalia in 1995. As part of developing its own infrastructure, a postal system was established.

Initially, the plan was to overprint stamps of Great Britain for use by the new republic. This plan was abandoned because it harkened back 35 years to when the territory of the republic was a British protectorate (1888-1960) rather than movement forward to an autonomous nation.

Instead, the government decided to issue stamps with designs of local interest. A shortage at the British printer, Harrison & Sons, of the special paper required to print the stamps resulted in an emergency, provisional issue of overprinted 1p Machin stamps.

This is the only instance of Machin stamps overprinted for use by a country other than the United Kingdom.

There were two overprints, one with a star obliterating the British penny value and the other without the star. Both are shown nearby.

As expected, these provisionals were not well received by local inhabitants and, within a few days, all stocks were withdrawn and destroyed.

Though rarely seen by collectors, these official and authorized overprints are not expensive.

Overprints on Machin stamps is an area of British philately that holds potential for original research.

For example, I am not aware of the existence of an exhaustive listing of overprints that have appeared on Machin definitives giving their sponsors, their dates of creation, their intents and their uses.

As an example, the predecimal currency ½d stamp pictured here has a seven-line overprint that includes the year 1971; “Todmorden,” the name of a market town of about 15,000 in the north of England close to Manchester; and an indication of 1-shilling received.

However, I do not know what “Local Mail” and “P.O. Licence OL3” refer to in this overprint.

Other than the obvious, I do not know for what purpose this overprinted stamp was created or used.

There are likely other Machin overprints that need explanation that are available to collectors.