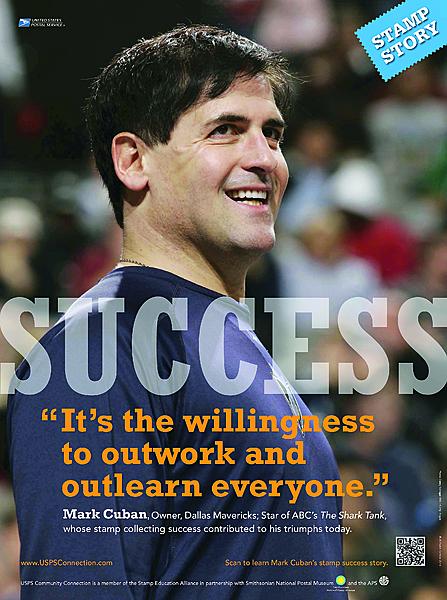 A Mark Cuban poster promoting the hobby of stamp collecting was handed out by the USPS Community Connection program at the APS Stampshow in August.

The Community Connection team handed out posters of Cuban as it launched its “Stamp Stories” promotion. The poster will be distributed to more than 80,000 schools around the country.

Cuban started collecting stamps at age 12 and was inspired by an album of foreign stamps his mother had collected.

“I was intrigued by all of the history represented in each stamp, and I saw images of foreign countries that made me want to learn more about them,” said Cuban. “So my mom got me hooked.”

The Community Connection group posted a text interview with Cuban on its website USPSconnection.com.

Future installments will include other interviews with individuals, institutions and clubs, with the “hopes of attracting new collectors across the nation.”

The hashtag #StampStories is being used online by the group to promote the sharing of its message on social media websites.

“We’re trying to think of ways to give stamps a cool vibe, because I think we need to do that in order to get kids a little more caught up in it,” said Ann Reilly, USPS Community Connection program developer.

Reilly said she saw Cuban on an episode of Shark Tank where he mentioned his history of stamp collecting.

Reilly contacted Cuban to see if he’d be willing to be the voice and face of the education program, and he was “immediately onboard.”

A Linn’s video interview with Reilly about Cuban and the program can be viewed at www.youtube.com/LinnsStampNews.