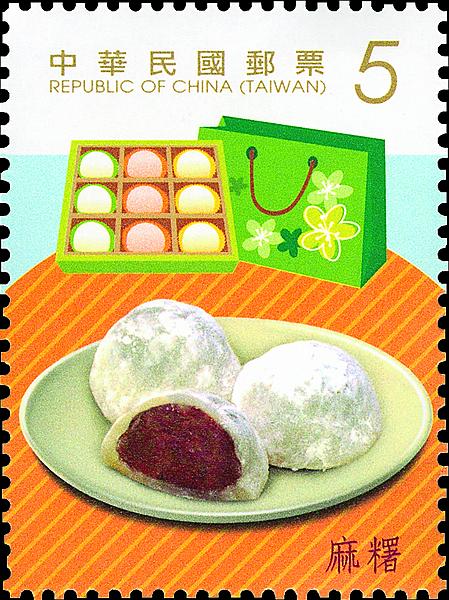 The “12½” in the selvage of this pane from the Netherlands celebrates 12 and one-half years of marriage of King Willem-Alexander and Queen Maxima. 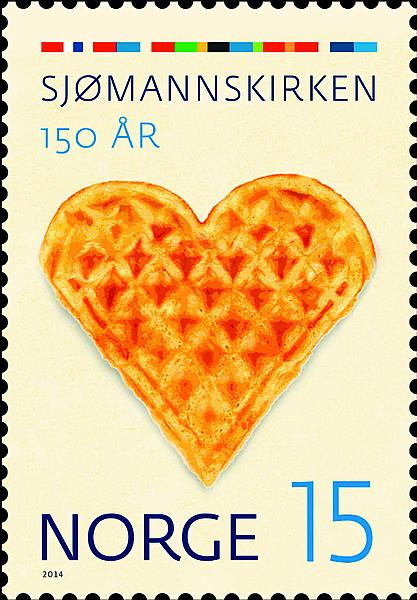 South Korean stamps illustrate the Pythagorean theorem, one of the Euler theorems and Pascal’s triangle. The three se-tenant stamps were issued July 15. 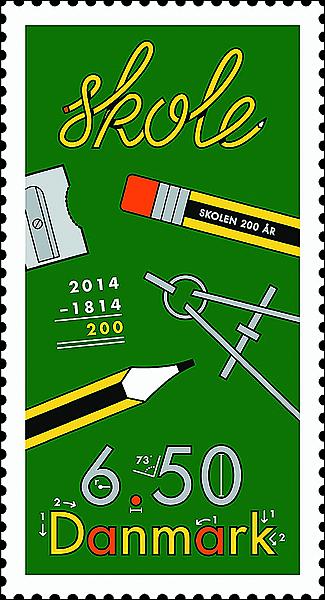 Subtraction and geometry are represented on this new stamp honoring Denmark’s school system.

In 1814, King Frederik VI of Denmark signed a series of laws that made education compulsory for children in Denmark.

Journal, Post Danmark’s publication for collectors, said: “The laws — the so-called school regulations — contained detailed instructions on how schooling should be organised both in towns and in the country, including how the schools should be laid out, how the teachers should be paid, and which subjects should be taught. The children were no longer to be taught only reading and Christianity, which until then had been the bare minimum, but also writing, maths and other useful competencies.”

Math is emphasized on the 6.50-krone stamp issued June 11 for the education bicentennial. For example, the subtraction problem 2014 minus 1814 equals 200, shown on the left side of the design, represents the anniversary. A compass is pictured on the right side of the design.

At the bottom of the design, additional math symbols are shown within and around the denomination, while the subject of penmanship is reflected in the instructional markings around three of the letters in the country name.

The design also includes two pencils and a pencil sharpener. Post Danmark’s first-day cover shows another pencil and an equation.

Jakob Monefedlt designed this self-adhesive stamp. Post Nord printed it by offset in sheets of 10.

More than 4,000 people from 120 countries participated in the International Congress of Mathematicians in Seoul, South Korea. The three stamps for the conference were issued July 15.

In announcing these stamps, Korea Post said: “During this International Congress, also known as the ‘Olympics’ for mathematicians, prominent mathematicians, the world over, gather to evaluate recent significant mathematical achievements and to lead lectures and discussions on the different areas of mathematics.”

According to Korea Post, the stamp designs represent the Pythagorean theorem, a Euler theorem and Pascal’s triangle. The three designs are se-tenant (side-by-side) in sheets of 15 stamps and three labels.

A 300-won stamp with a light blue background shows the Pythagorean theorem.

The Math is Fun website created by Rod Price provides the following simple explanation of the theorem named for Greek mathematician and philosopher Pythagoras: “In a right angled triangle the square of the long side is equal to the sum of the squares of the other two sides.”

Another 300w stamp features a theorem named for 18th-century Swiss mathematician Leonhard Euler. The new-issue announcement from Korea Post refers to it as Euler’s theorem giving the necessary and sufficient conditions of a graph having an Eulerian tour, also known as a path, circuit or cycle.

The website of the National Institute of Standards and Technology’s defines an Eulerian cycle: “A path through a graph which starts and ends at the same vertex and includes every edge exactly once.”

The 500w stamp illustrates Pascal’s triangle, named for 17th-century French mathematician, scientist and philosopher Blaise Pascal. Merriam-Webster’s online student dictionary defines Pascal’s triangle: “a set of numbers which are arranged in rows in the shape of a triangle with the top row containing only 1, the next row 1 1, the following row 1 2 1, and in general the nth row containing the coefficients in the expansion of (a + b)n as n equals 0, 1, 2, 3, etc.”

Jaeyong Shin designed the stamps. The Korea Minting and Security Printing Corp. printed them by gravure.

A sheet of 10 stamps from the Netherlands features the fraction “12½” in the top selvage.

The sheet was issued Aug. 2, 12 years and six months after the Feb. 2, 2002, wedding of Prince Willem-Alexander and Princess Maxima, now king and queen. In the Netherlands, 12 and one-half years of marriage is celebrated as the copper anniversary.

Among the photos of the royal couple is one taken after they announced their engagement in 2001. They also are shown visiting New York City in 2009 and watching the 2014 Winter Olympics in Sochi, Russia. The daughters are pictured riding bicycles with their parents and at their father’s April 30, 2013, inauguration as king.

Like most recent stamps of the Netherlands, these stamps are nondenominated. The “1” on each stamp indicates that it pays the domestic rate for items weighing up to 1 gram. Harmine Louwe designed the stamps. The French security printer Cartor printed the stamps by offset.

Not surprisingly, numerals are featured on an upcoming German stamp commemorating 300 years of government auditing.

In 1714, King Frederick William I of Prussia founded the General Chamber of Accounts to audit governmental accounts and to suggest reforms.

The €1.45 stamp will be issued Oct. 2. The crossword-style design by Matthias Beyrow includes a vertical column of the numerals zero to nine. The “3” is used as the first digit in “300,” and some of the numerals double as letters. For example, “4” represents “a” in “jahre,” the German word for “years.”

Bagel Security Print of Monchengladbach printed the stamp by offset in sheets of 10.