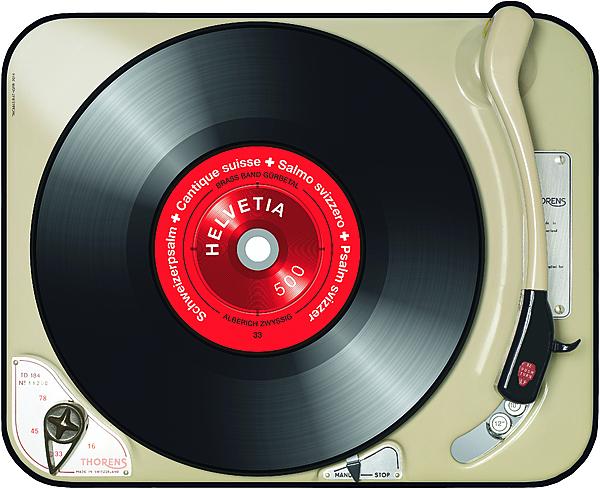 This new Swiss stamp in a souvenir sheet not only looks like a vinyl record, it also plays the Swiss national anthem. 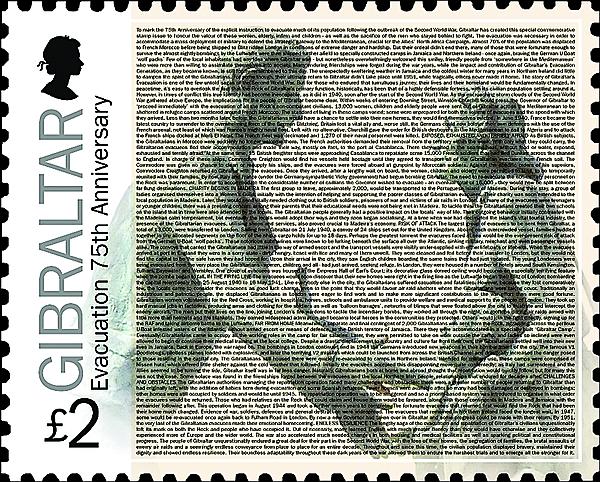 Gibraltar issued a stamp Sept. 10 with a record-breaking 2,183 words inscribed on it. The stamp is part of a set of five commemorating the 75th anniversary of the evacuation of Gibraltar’s civilian population during World War II. 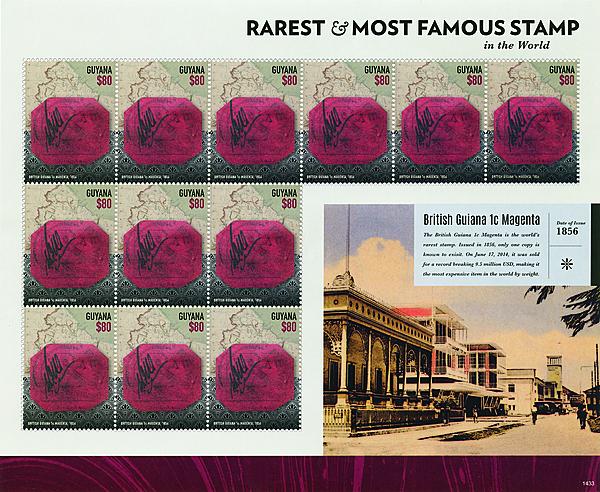 This pane of 12 $80 stamps issued Aug. 27 by Guyana honors the June 17 auction of the unique British Guiana 1¢ Magenta stamp for almost $9.5 million.

Four stamps from Guyana commemorate the recent auction of the British Guiana 1¢ Magenta for a record sum.

As reported by Matthew Healey on the front page of the July 7 Linn’s, this unique stamp was auctioned June 17 at Sotheby’s in New York City for $9.48 million, including a 20 percent buyer’s commission.

Guyana, the South American republic that once was the crown colony of British Guiana, honored that historic sale on $80, $200 and two $800 stamps issued Aug. 27. Each stamp features a stamp-on-stamp design of the 1¢ Magenta.

On the new $80 commemorative, the famous stamp is shown on a background with a map at the top and a decorative design at the bottom.

The commemorative was printed in panes of 12 with a header that reads “Rarest & Most Famous Stamp in the World.”

The large selvage area at lower right on the pane shows a vintage postcard, circa 1930, picturing the post office buildings in the background and the Hand-in-Hand insurance company in the foreground.

The following short paragraph of text is superimposed on the image of the postcard: “The British Guiana 1c Magenta is the world’s rarest stamp. Issued in 1856, only one copy is known to exist. On June 17, 2014, it was sold for a record breaking 9.5 million USD, making it the most expensive item in the world by weight.”

This same paragraph is included in the selvage of the pane of four $200 stamps and on the two souvenir sheets, each containing a single $800 stamp.

A stamp from Gibraltar sets a new world record for the most words on a stamp.

A total of 2,183 words are included on the £2 high value of Gibraltar’s Sept. 10 set of five commemorating the 75th anniversary of the evacuation of the civilian population during World War II.

A Sept. 8 press release from the government of Gibraltar said: “The £2 stamp has set a new philatelic record for ‘Most words on a postage stamp’ with a total of 2,183 legible words! Thanks to an innovative micro printing technique and working with one of the leading international security printers has made it possible for Gibraltar stamps to once again place our country and on this occasion one of our most important historic anniversaries on the worldwide map.

“The 2,183 words have been fitted inside a 40 x 32mm stamp and explain in detail the history of the evacuation of the civilian population of Gibraltar during World War II.”

In case you do not want to get out a magnifying glass to read the text on the stamp, all 2,183 words also are included on a PDF document on Gibraltar’s government website. This document can be reached at http://tinyurl.com/kle4ffy.

In addition to the text, the £2 stamp shows the figures of a man, woman and child from the Gibraltar Evacuees Memorial sculpture on Waterport Road.

Sculpted by Jill Cowie Saunders, the memorial shows families reuniting after the war.

The other stamps in the set, 12 pence, 50p, 54p and £1, reproduce black-and-white photographs of the evacuation of approximately 16,000 women, children, elderly and infirm Gibraltarians “to accommodate a mass deployment of military to defend the strategic gateway to the Mediterranean, crucial for the Allies’ North Africa,” according to the lengthy inscription on the £2 stamp.

The evacuees were first sent to French Morocco and from there to Madeira, England, Jamaica and Northern Ireland.

Stephen Perera designed the stamps using photographs from the Gibraltar Archives. Cartor Security Printers of France printed them by offset.

Rather than commemorating or breaking a record, a new Swiss stamp is an actual vinyl record that plays music.

The 5-franc stamp was issued Sept. 4 in a souvenir sheet.

In announcing the issue, Swiss Post said: “In many of us, the black 45 and 33 rpm vinyl discs evoke nostalgic memories. Now they are the subject of an exclusive miniature sheet included in the latest stamp issue. The latter will literally be music to the ears of many stamp enthusiasts.

The 5fr stamp is designed to look like a vinyl record. The label area of the record surrounding the central spindle hole includes the country name “Helvetia”; the denomination “500” (for 500 centimes, or 5fr); the name of the national anthem Swiss Psalm in German, French, Italian and Romansh; and the name of the composer, Alberich Zwyssig.

The anthem’s lyrics came from a poem by Leonhard Widmer. The first verse is printed in fluorescent ink on four Swiss stamps issued May 5, 2011 (Scott 1422a-d), to commemorate the anthem’s 50th anniversary. Swiss Psalm was first performed in 1841, but did not become the national anthem until 120 years later.

The nonprofit Swiss Public Welfare Society organized a competition in 2013 to replace the lyrics to Swiss Psalm, but, if possible, maintain the melody by Zwyssig. More than 100 entries were received by the June deadline.

Thomas Rathgeb designed the new souvenir sheet. Joh. Enschede of the Netherlands printed it by offset using a special varnish on wood-free cardboard.